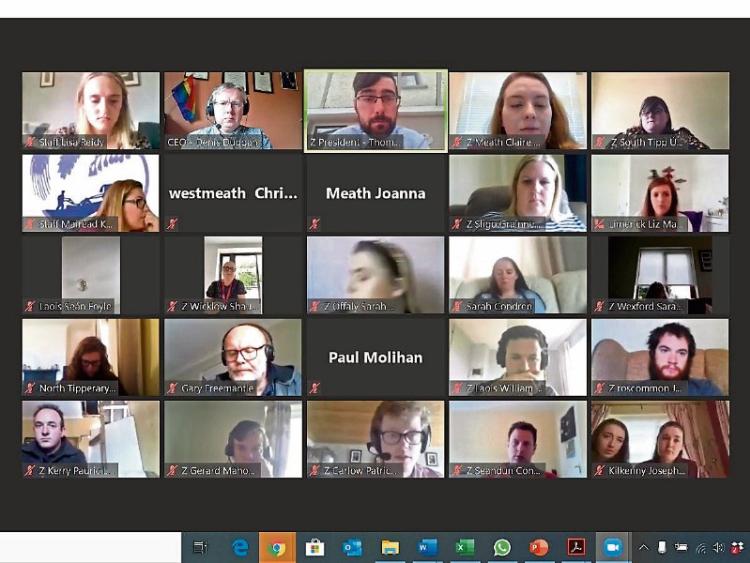 Given the COVID-19 pandemic, Macra na Feirme has had to adapt its operations to do its part to aid in suppressing the spread of COVID-19.

“The AGM had to happen and we found a way to make a Zoom call work with additional use of online voting software from SimplyVoting.com” said Macra na Feirme Chief Executive Denis Duggan.

“The format was a bit unusual for us but we are an organisation with a strong history of adapting to the times and this is just another example of our ability to overcome the challenges that face us” said Macra National President Thomas Duffy.

Members logged into the Zoom call, which saw the outgoing Treasurer, Una Ryan, deliver the audited financial statements followed by addresses from the President, Chief Executive, and sub-committee Chairs.

In his address, Macra Chief Executive Denis Duggan cautioned, “Like all youth and charity organisations, we have significant challenges in responding to COVID-19 and Brexit, only organisations that are agile and responsive are going to survive.”

Similarly, Macra National President Thomas Duffy made mention of the challenges posed by COVID-19 and the new normal we face, calling on members and young people to make a return to a better new normal.

Sub-committee Chairs outlined their activities over the last year and thanked their fellow committee members, national office staff for their support and for the support of the executive over the course of their tenure.

The AGM also saw elections for 2020/2021 members of the Board of Directors:

Andrew Doyle of Kilkenny has been elected Honorary Treasurer

John Keane of North Tipperary has been re-elected as Director

Shane Quigley of Mayo has been re-elected as Director

Amanda Monahan of Cavan is newly elected as Director

“I congratulate Andrew, Claire, John, Amanda, and Shane on their Board positions and look forward to working with them over the next year” said National President, Thomas Duffy.

In his address, Mr Duffy called for greater cooperation amongst rural young people to face the challenges ahead.

Addressing the COVID-19 pandemic, he called for the building of a better “new normal” that provides more for all young people in rural Ireland.

He also noted that the pandemic has reduced traffic and increased greater working flexibility, something that should continue to exist when we overcome COVID-19.

He called for climate action and a greater ambition on both targets and fairer distribution of supports between rural and urban Ireland.

Thomas Duffy added that farmers need to create a farmer led agenda and lead the narrative instead of continuing to deal with the villainization of farmers role in greenhouse gas reduction.

The President also called for a fundamental rethink of the strategy of transport and work with an accelerated rollout of broadband, to enable greater opportunities for remote working, and investment in public transport links.

He noted that these would also help to stimulate greater employment directly in rural Ireland by allowing the creation of a distributed chain of small and medium sized enterprises to take advantage of the new economy.

In closing he stated that the predicted economic downturn cannot be used as an excuse or accepted to justify a return to previous policies.

In the face of what downturn lay ahead, he cautioned that young people will not accept the forced emigration witnessed during the 2008 downturn.