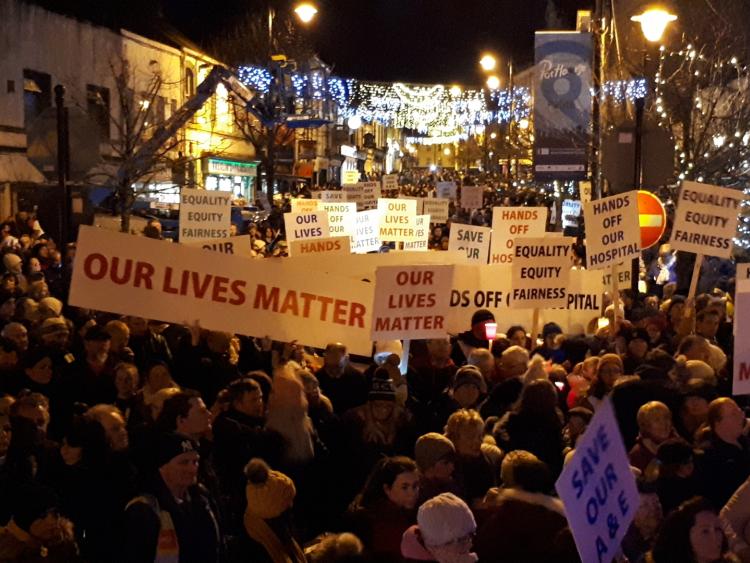 The new Minister for Health's 'winners and losers' views on hospital reconfiguration could worry anybody who has fought against the downgrade of Portlaoise hospital's Emergency Department (ED/A&E) and other services.

Mr Stephen Donnelly entered an exchange on Twitter in November 2017 with the Save Midland Regional Hospital Portlaoise account which represents the Save Portlaoise Hospital Committee's campaign against downgrade.

The exchange took place just as a leaked plan revealed that the HSE wanted to downgrade Portlaoise hospital. ED, ICU, maternity, paediatrics and most surgery would be removed. Other hospitals such as Tullamore would be expanded as part of a reconfiguration of hospital services in Dublin and the Midlands.

"There there are 9 ED's in Dublin and people seem to have a big problem with Laois/Kildare/Carlow and Tipperary sharing one... do you think that's fair?" said @saveMRHP

His reply was: "There are winners and losers, sadly, in most healthcare reconfigurations.

The reply from @saveMRHP was: "Losers mean loss of life, it's unacceptable in my book".

Soon after the exchange, a major march took place in Portlaoise to halt the downgrade.

Not long after the march the then health minister, Simon Harris said he would consult with stakeholders in Laois before proceeding with the HSE's downgrade plan.

The consultation has never happened. While it has been argued that Sláintecare superseded any reconfiguration that would include downgrade, the HSE's plan of 2017 has never been officially ruled out.

While Covid-19 will be a priority for the new Fianna Fáil Minister, reform and more hospital reconfiguration will come on the table under the implementation of the Sláintecare plan.

The new Taoiseach Micheál Martin published the Hanly Report when he was Minister for Health. It led to the removal of services from many small hospitals. Portlaoise narrowly avoided major downgrade.

Portlaoise hospital has been a frontline Covid-19 hospital. It has undergone extensive reform since the controversy of 2014 which led to the plan to downgrade the hospital.

Two Laois Offaly constituency politicians will sit at the cabinet table in the new Government but both are based in Offaly. Barry Cowen is the Minister for Agriculture while Senator Pippa Hackett is a 'super junior' minister.

Stephen there are 9 ED's in Dublin and people seem to have a big problem with Laois/Kildare/Carlow and Tipperary sharing one... do you think that's fair?

10. There are winners & losers, sadly, in most healthcare reconfigurations.

Losers mean loss of life, it's unacceptable in my book