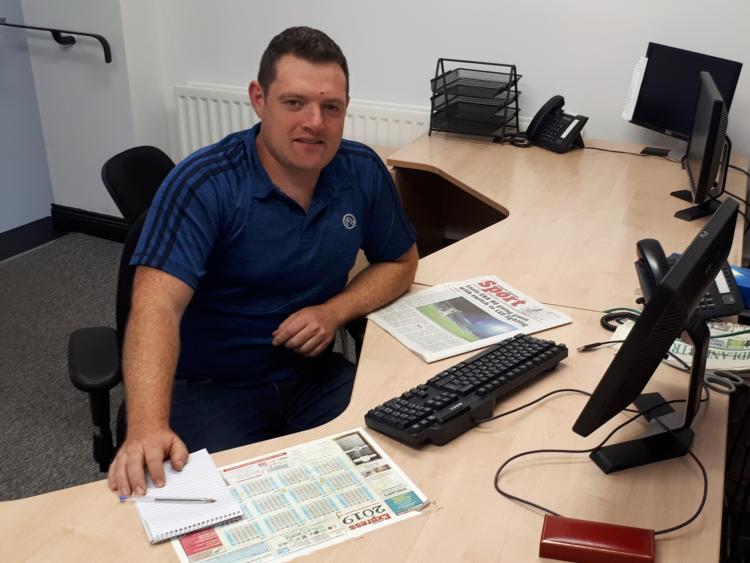 As the sporting world attempts to come out of the vice like covid grip, the Leinster Express has moved to appoint their new Sports Editor as part of its growing sports team.

Hailing originally from Ferbane in County Offaly, Brian Lowry has joined the Express  and will  move from the Midland and Tullamore Tribune where he has spent the last 10 years working as a sports journalist. Brian will join sports reporter Greg Mulhall to form a dynamic team covering sport in Co Laois.

Hailing from over the Slieve bloom mountains in County Offaly, Brian Lowry has a deep rooted passion for sport and indeed his line of work.

GAA has been stapled in his life from an early age and Laois supporters mightn't like to hear this but as a November 1982 baby, the first picture taken of him was in the Sam McGuire cup, won by an Offaly team that included his three uncles two months previous.

A lover of all sports, he played a big role in increasing the sporting coverage in the Tribune publications.

GAA is his first love but as time moved on, his sporting palate expanded, which has led to an abundance of interest in sport across the board.

Golf in particular has become a big focus of the family in the Lowry family in the last decade given the success of his cousin Shane Lowry who is a three time European tour winner, World Golf champion and the current Open champion.

Having dabbled in underage rugby with School and province, GAA was always the magnet. He played football and hurling into his early thirties with Ferbane before moving to Mucklagh, a village on the outskirts of Tullamore, in 2014.

In typical GAA fashion, he joined the Shamrocks GAA club based in Mucklagh originally to get to know people in the area but semi-retirement didn't last long and the boots were called into action again.

In 2018, he was the goalkeeper on the Shamrocks team that won the Offaly Senior 'B' football championship that pushed the club back to the top tier of Offaly football for the first time since 2001.

That highlight was almost toppled a few months after but alas, it wasn't to be as Kildare's Twomilehouse beat them by a point in the Leinster club Intermediate football final.

Having made a Senior quarter final last year before eventually falling to eventual champions Ferbane, he decided to call it a day with injuries, family and work commitments all playing a factor.

In a bold move, especially for a journalist, he has recently taken up refereeing in his native County.

Married with three kids, the Offaly native spoke on his appointment this week.

“Sport is an integral part of Irish society. I feel privileged to be in a position to bring readers the sporting stories that matter in Laois. From field sports, team and individual sports, every sport matters and my inbox will always be open.

“I look forward to meeting people and getting out and about as the sporting world begins to open their doors again. There are stories and characters in every walk of life and I look forward to bringing readers the Laois sporting equivalent.”

"I am particularly looking forward to working with Greg Mulhall, whose knowledge of Laois sport is second to none and who has built up an incredible following both in print and online since he started in Leinster Express just 18 months ago. We are excited to be at the forefront of local sports coverage both online and in print at this historic time."