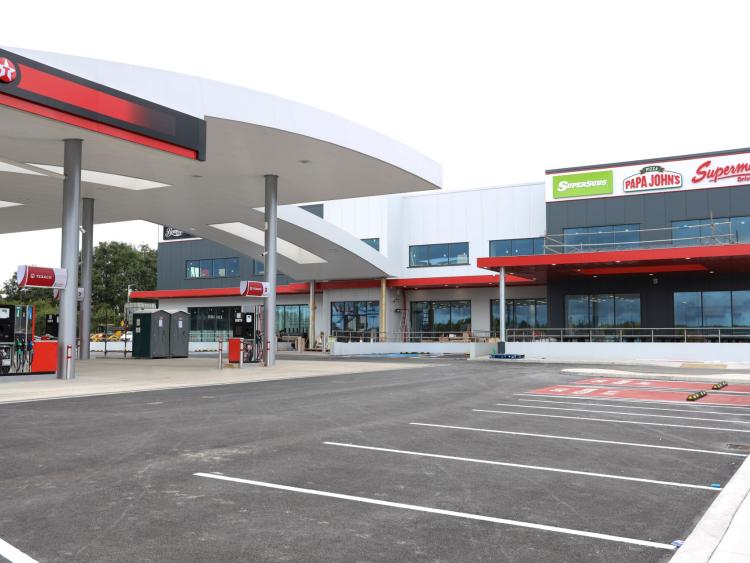 The new Portlaoise Plaza at Junction 17 on the M7 which is due to open this week. Pic: Alf Harvey

Some 120 new jobs will be created in Laois at the new Portlaoise Plaza opens on Junction 17 just off the busy M7 Limerick Cork Dublin motorway this week which is spearheaded by Supermac's boss Pat McDonagh.

The jobs will be announced at the site this morning, Monday, July 27, by Laois Offaly TD and the Minister for State at the Department of Finance, Seán Fleming and The Plaza Group's owner, Pat McDonagh.

The Portlaoise Plaza, which opens on Friday, July 31, is part of the Supermac’s Group and will be the largest Plaza in the country. The opening of The Portlaoise Plaza means that Supermac’s will now have three outlets in Laois – at Manor Stone in Ballacolla, off the M8 and Supermac’s Portlaoise in the centre of the town, which was opened on June 2, 1995.

The group also owns the Killeshin Hotel in Portlaoise town. Originally, the Portlaoise Plaza was due to open in May but that date was postponed due to the Coronavirus pandemic. Work had re-started on the Plaza in recent weeks and, when open and fully operational, it will employ 120 full and part-time staff. The Plaza will be accessed off the M7 motorway at Junction 17 and can also be accessed from Portlaoise town.

Minister Fleming said that the jobs were a timely boost for the region.

“As we deal with the effects of the global pandemic on a national level it is very encouraging to see that jobs are being created to this extent despite the difficult circumstances,” Minister Fleming said. “Pat and Una McDonagh are now one of the biggest employers in the county through the Portlaoise Plaza, Supermac’s and the Killeshin Hotel and their commitment to the region is to be commended. It is an example of the positivity that is emanating from the great work that is being done to promote the region as a place to work, live and visit,” he concluded.

The owner of The Plaza Group, Pat McDonagh, said that there has been a huge amount of excitement over the opening of the Plaza because it is a significant investment in the locality at a time when the country is experiencing some of its biggest challenges in decades.

“Many customers have expressed great anticipation and we’ve employed a lot of local staff which is a real boost for the area,” he said. “In these challenging times, the way we operate has changed completely. We have listened to staff, customers and the relevant authorities and we have put in place a plan that allows us to open gradually with the safety of our staff and customers as our main focus. It is important that we remain positive and we work together to get over these challenges.”

Supermac's say the new centre brings the number of people employed by the group throughout the country to over 4,000. The group consist of Supermac’s, Só Hotels and The Plaza Group.

Supermac’s says it is Ireland’s largest indigenous quick-service restaurant chain. There are 116 franchise outlets across the country. Supermac’s also operates the Papa John’s brand and SuperSubs.

The Portlaoise Plaza opens for business on Friday, July 31.

The Portlaoise Plaza and will join the Barack Obama Plaza, the Galway Plaza, the Kinnegad Plaza, the Tipperary Town Plaza and the Mallow Plaza as part of The Plaza Group of motorway and national route service stations.