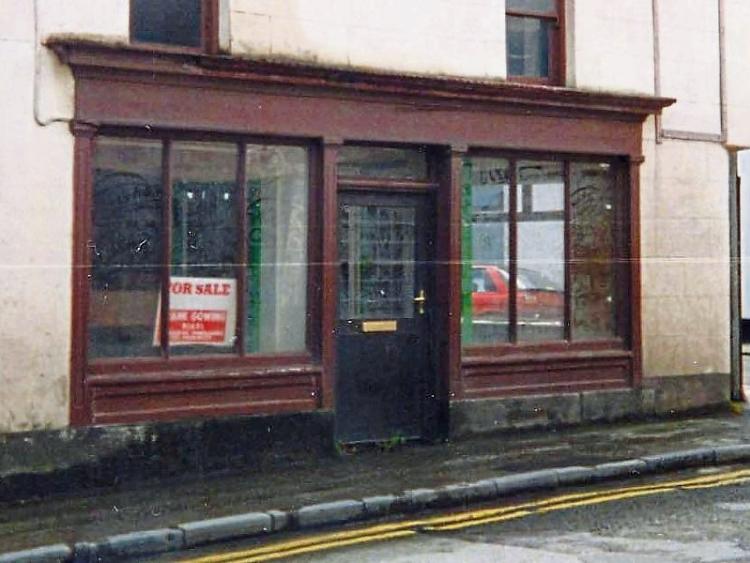 Without Edward - or Eddie Boylan as he was better known - many of the tales would have been untold.

A grocer and feedstuff merchant, he himself was a resident of Main Street and was thus a participant in the story which he recorded. Over a period of about 80 years, he personally witnessed the change in the streets.

Not that his local historical knowledge was confined to Main Street it stretched as far as his bicycle could carry him on his Sunday spins. Portlaoise people seeking information on the past were invariably told, “ask Eddie Boylan.”

His shop was a landmark, old fashioned but scrupulously clean, wooden counter scrubbed to whiteness - a magic place with its tea and snuff canisters and brass scales. Among his first tasks each morning was to remove the window shutters, but, in the event of a local person’s death, he had a beautiful custom of leaving one shutter in place as a mark of respect.

Alas, the custom died with him - in February, 1986. Fortunately, though, much of his knowledge didn’t expire with him. His writings remain.

In the interests of authenticity and in so far as possible, we publish these evocative notes as Eddie wrote them, even though some of the information contained therein needs updating. Readers should bear in mind that the house numbering system in Main Street was changed at one stage.

No. 18 Main Street: Tom Keegan, schoolmaster, Heath, came from Mountrath area. Had retired. One son Bill, married a Mulhall. A daughter married a McCarthy. Both died early. They rear the only child Jerry. Mrs Meredith. Mrs McEvoy, a Railway Porter. Succeeded by Pat Mahon. Wife a Bowe from Clontyglass. Succeeded by Miss Deegan. Was occupied earlier by randon’s, harness-makers. After them by an ex-Brit soldier, Lynch, the Zulu-man who was our first barber.

No. 107 Main Street: Michael Boylan since 1904. Walls from about 1900. Before that by three Delaneys who were daughters of Michael Delaney, landlord. Before that by Mrs Byrne, aunt to John Moore, Kyle. In 1875 Micheal Bradshaw occupied the portion on Main Street and John Fitzpatrick, his brother-in-law the portion facing New Road. In 1850 G.V. these two houses formed one and they were then occupied by John Gallaher and numbered 63. A pub. Before this occupied by Morans.

No. 109: Flynns. Their father, Martin Flynn, had married Katie McDermott. Her mother’s maiden name was Mulhall, and she had lived there also.

No 110: Miss Connor, dress-maker. Before that for many years by the Lyons family who were nailers.

These last two houses were held by Matthew Farrell in 1850 G.V. Their number was 64.

No 111: Katie Whelan, nee Gavan. Before that by Frank Morrin. In 1875 held by Case. In 1850 G.V. was vacant. Then No. 65. This house was built by Higgins, a confectioner and hired car man who lived where he late J.P Bennett lived in Upper Main Street.

No. 113: Murray Plumbers. Before that by

NUMBER ONE was the home of Lalors, the renowned wheelwrights. The last member of family, Louis, died a few weeks ago.

Paddy Hanlon, cycle agent; by Dunne an Insurance man. It was built in 1902 and used as a butcher’s shop by Dan Kennedy, Abbeyleix. John McNeill worked for him. The previous house there was occupied by Nicholas Maher and earlier by his father Michael Maher, Ballymacken. G.V. 1850 Patrick Molloy the No. 67. No. 114: Now demolished. Occupied by Fox, painter. Earlier by Briens, carpenters. In 1850 G.V. Charles Jackson.

No. 115: Now demolished. In 1850 G.V. occupied by John Carty as an Iron Foundry, office and small garden. I remember to see it used by the Fox family who lived on Stradbally road as a work-shop. They were coach painters.

No. 116: Now demolished. In 1850 G.V. occupied by Noble Cuffe. Then No. 70. Last occupant Arthur Laffan, painter. Before that Sheridan had married Neil Maguire. Maguire’s had been there for many years. They had a side-car for hire.

HUMES, number 106, are probably the longest established business family in the town. They began trading in 1863.

No. 1 Main Street: Now occupied by Paddy and Louis Lalor. Earlier by their father James and first occupied by their grandfather. In 1850 it was No. 73. Vacant.

No. 3 Main Street: (should by No. 4) Now Mrs George Dalton, widow. Earlier by Mrs Fanny Fennelly, nee Lalor, Ballydavis. Her son was a shoe-maker, now dead. He had married a Donohoe, Mountrath Rd., where his family now live. In 1850 was No. 74 Vacant. No. 4 Main Street (should be No. 3): Now mrs Owen Deegan, widow. Earlier by Delaney, Derryguile. Earlier by Murphy who worked for Odlums Mill. His wife was a Fleming, Kilminchy. In 1850 was No. 75. Vacant.

No. 8 Main Street: Now Keatings. Earlier by Mrs Hanlon. Earlier by Joe Bannon and earlier Brocks. No number in 1850. I think a lane went in on that and the next site.

KAVANAGH Tailor, “Late of London” - he was to be found at number 79.

No. 16: Charlie Keegan, pub. Earlier Cushions, Patrick Kearney. Earlier Jack Whelan who succeeded his grandparents Brennan. In 1850 it consisted of two houses occupied by John Brennan and Patrick McEvoy. Then Nos. 89 and 90.

NAILERS and harness-makers, like blacksmiths and wheelwrights, have faded from Portlaoise. The nailers were the Lyons family who resided at number 110. Harness- makers were at number 25 (Brandons) and 61 (Hunts) was in the other. Then Nos. 91 and 92.

No. 18: Now occupied by Whitford as boot shop. Earlier by Ellen Whelan. Earlier by her father “Pad the Bleach.” In 1850 occupied by Martha Stapleton, an aunt to Pad above. Then no. 93

No 23: Now Shaws Drapers. Earlier Buckleys. The Main Street portion of these premises consisted of four houses in 1850. Occupied by James Boylan, pub. Then No. 98. Vacant, No. 99.

No. 24 Main Street: Now John Egan, Restaurant. Earlier by Delaney-Lalor and Miss Horan. In 1850 the portion occupied by the Pub was occupied by John Miller and he was the postmaster. Then No. 102.

No. 25: Now Scully, barber’s shop. Earlier by the Misses Fitzpatrick who sold papers, delph and groceries. In 1850 by Margaret Brandon whose sons where harness-makers.

No. 81: Mrs Bilbourne. Set. She is in England. Formerly her aunt Mrs McDonald nee Bradshaw. Before that by Mrs Katy Aird, nee Fitzpatrick, her aunt. 1850 Patrick McEvoy. Then No. 109.

No. 34: Now Lewis, earlier Pat McLogan. Earlier FitzPatricks. 1850: There were two numbers then, Nos. 112 and 113. They were occupied by John Matthews, Hotel. The second house would be on Hackett’s Lane then or Railway Street then. In 1850 Daniel Farrell was listed as No. 114. This was also Hackett’s Lane.

No. 48: Was Loughman’s private house. They sold it in recent years to Jack Grant. Now McEvoy. 1850: John Byrne.

NUMBER 30, The Regency Hotel (formerly Airds) was a police barracks in 1850.

No. 66: The B&B Bar. A few years ago Paddy Bennett and James Bennett his father. Earlier by Higgins, confectionery. They also has jarvey cars for hire. 1850: Probably two houses. W Fleming and Jane Claxton.

The “Zulu-man” was the town’s first barber. Lynch was his name and he was an ex British soldier. His shop was at number 108.

No. 100: Held by Mrs Downey, Formerly Mrs McAuliffe, Before that by Bergin, Mrs Clear, McCarthy and Rody Delaney. In 1850: Held by Peter Loughman and James Kinsella.