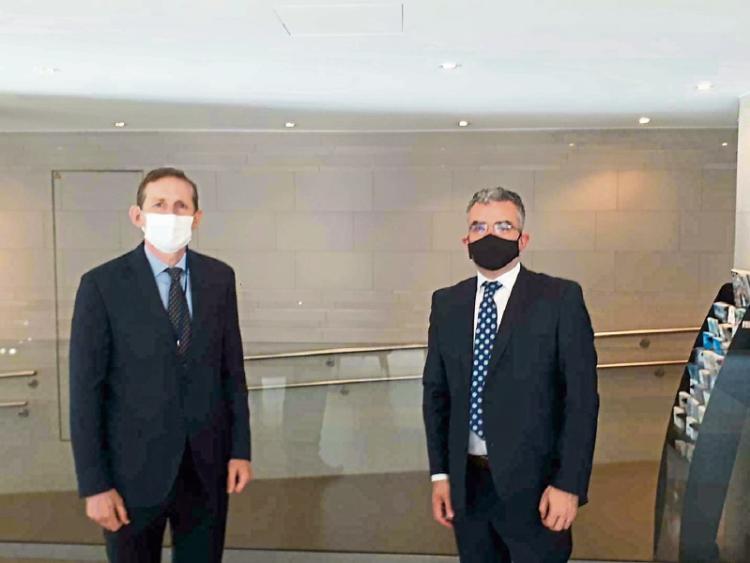 FA Director of European Affairs Liam McHale and Darragh Calleary Minister for Agriculture, Food and the Marine in Brussels

Reacting to the outcome of the talks IFA President Tim Cullinan said that while a deal was needed, the funding provided for the Common Agricultural Policy (CAP) over the next seven years is not consistent with the EU’s aspirations for farming as part of the European Green Deal.

“On the one hand the Commission wants farmers to take costly actions to implement the Farm to Fork and Biodiversity strategies, but on the other hand they don’t want to provide the necessary funding,” he said.

“The overall allocation for CAP is down approximately 9% at constant prices, compared to the previous seven years. The Government will need to come forward with significant co-financing to protect payments,” he said.

“What farmers will want to know is how these figures, together with national co-financing from the Government, will translate into payments at farm level,” he said.

“The Taoiseach now needs to give a clear commitment to all farmers that their payments will at least be maintained in real terms during the transition in 2021/2022 and beyond when the new CAP comes into play,” he said.

“These talks were difficult with push back from the so-called frugal countries reducing funding for rural development from the recovery fund from €15bn to €7.5bn during the talks,” he said.

“While there is a ring-fenced ‘additional allocation’ for Ireland under rural development of €300m, the Government will need to provide significant National co-financing to support these programmes,” he said.

An essential aspect of the outcome is the creation of a €5bn contingency fund for Brexit.

“Depending on the Brexit outcome this may not be sufficient, but it is an important acknowledgement that some sectors and Member States will need aid if there is a poor outcome to the Brexit talks,” he said.

Meanwhile, ICMSA President, Pat McCormack, said what was already clear was that agriculture has taken a hit compared to the previous programme period of 2014-2020 and it will be necessary for the Irish Government to supply three basic metrics immediately to allow proper consideration of the funding deal concluded. “Firstly, we need a country by country allocation, secondly, we need to know by how much Ireland’s overall allocations – under Pillar I and Pillar II – are down and, thirdly and most importantly now, we will need to know how our Government intends to make up that reduction”, said Mr. McCormack.

The ICMSA President said that we appeared to have arrived at the kind of illogical ‘swings and roundabouts’ solution he had warned against.

“There’s no point whatsoever in Ireland getting more funds under a COVID heading to be distributed amongst larger commercial businesses affected by the pandemic, if we’ve lost the same or greater under a CAP heading that would have been distributed amongst farm families and through them into the wider rural economy. We’re no better off nationally and, in fact, all we’ve done is sign off on an arrangement that diverts money from the economically most disadvantaged areas to sectors and areas that are often more economically developed.

“ ICMSA is clearly stating that farm families have taken a hit and it is incumbent upon the Irish Government to explain how they intend making good that reduction and - before it’s even suggested - expecting farmers to do more for less is simply a non-starter”, said Mr. McCormack.