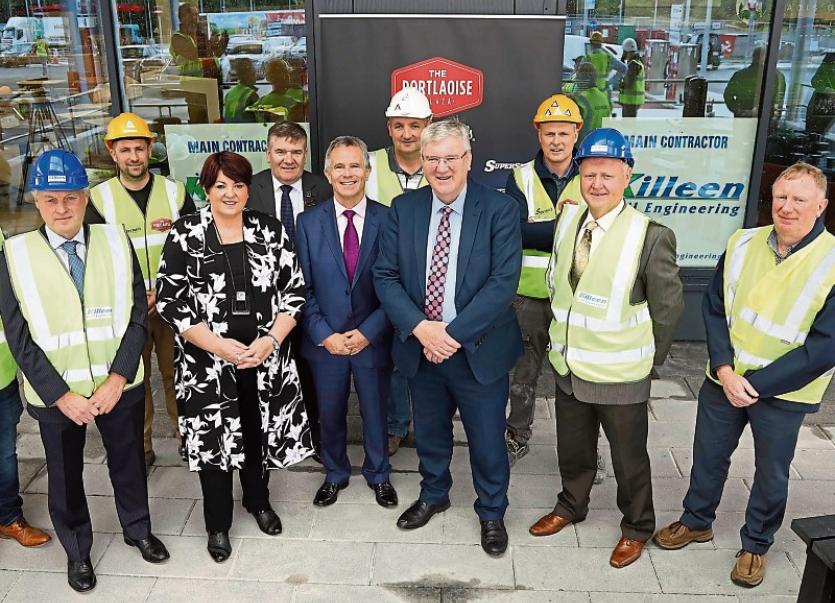 The opening of the Portlaoise Plaza

World class facilities which would welcome people from every corner and county of Ireland was how Supermac's owner Pat McDonagh characterised the new Portlaoise Plaza ahead of its opening to the public this Friday, July 31.

The theme of a meeting place permeated Mr McDonagh's comments at last Monday morning's announcement of 120 jobs at the new Portlaoise Plaza.

“Our motorway service areas have provided social meeting places, as we hoped they would, on a grand scale where strangers make friends, matches are played on the way to, and replayed coming back from games.

“People get a chance to pause for a while. They are learning places where strangers discover the gems of the locality and are invited to visit them.

“Our plazas are the 21st definition of a rambling house, the local shop, local pub and the coffee equivalent. This will be an exciting place.”

The Portlaoise Plaza is the seventh plaza in the Supermac's Group.

Mr McDonagh noted that each was different in terms of history and context.

“Portlaoise is special because the town and wider county is special. We have been fortunate to build on that special ethos,” he noted.

“We have invested a lot of money here, this development is in the region of €10 million.

“Portlaoise to me is a place that models the best of modern Ireland. This town has almost uniquely ignored downturns, recessions, social negatives and the popularly presented image of rural towns, and has set its sights high on progress.

“You need to pause for a second to understand what is happening in Portlaoise, and in Laois.

“The population has increased by 50 per cent since 2006. No other large town in the country can compete with that. The population of Portlaoise is now 24,000 and census figures show that the employment rate competes with anything against the affluent suburbs of Dublin.

“Sport is thriving in all codes and the voluntary effort is superb.

“The integration of migrants is a model for any community. At a crossroads such as this one might think crime would be an issue but detection and deterrent have made this county one of the havens of a safe community.

“Portlaoise has done better financially and socially since the recession. This is due to exceptional leadership. I want to commend Laois County Council and its CEO John Mullholland.

“When others were looking inward Laois County Council was plotting the inland port and Togher enterprise park. This foresight give myself and Una the courage to continue.

“Balanced regional development is at the core of everything they do.

“We are proud to be the first to open in this park of national importance.

“The success of Togher will see trains stop in Portlaoise bringing people from Dublin to work in Portlaoise,” he predicted.