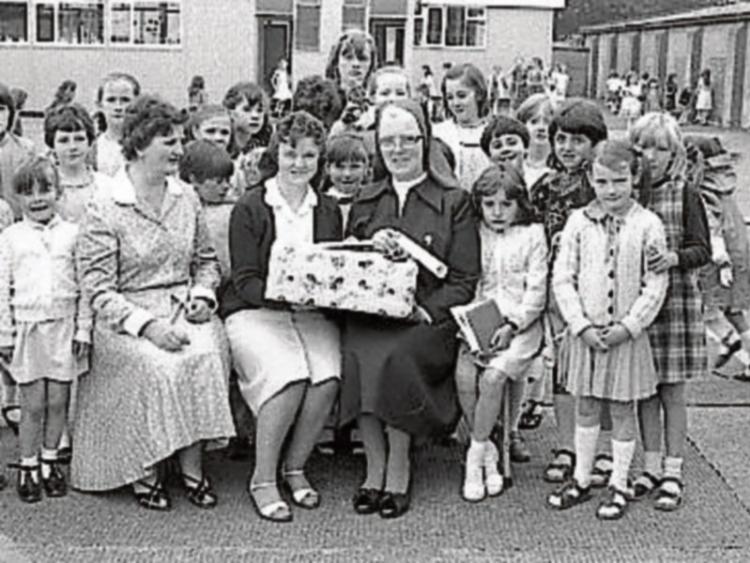 Sr. Paula was a teacher in the Sacred Heart Primary School in Portlaoise for over forty years.

Not only that but she was in charge of a very singular class in the school, the Junior Infants.

In that capacity she was the teacher who met each little pupil on their very first day in school and she gradually got them accustomed to the disciplines of school life.

A naturally kind and loving person with a bubbling personality, she is dearly remembered for her kindness and forbearance by all who passed through her gentle hands. 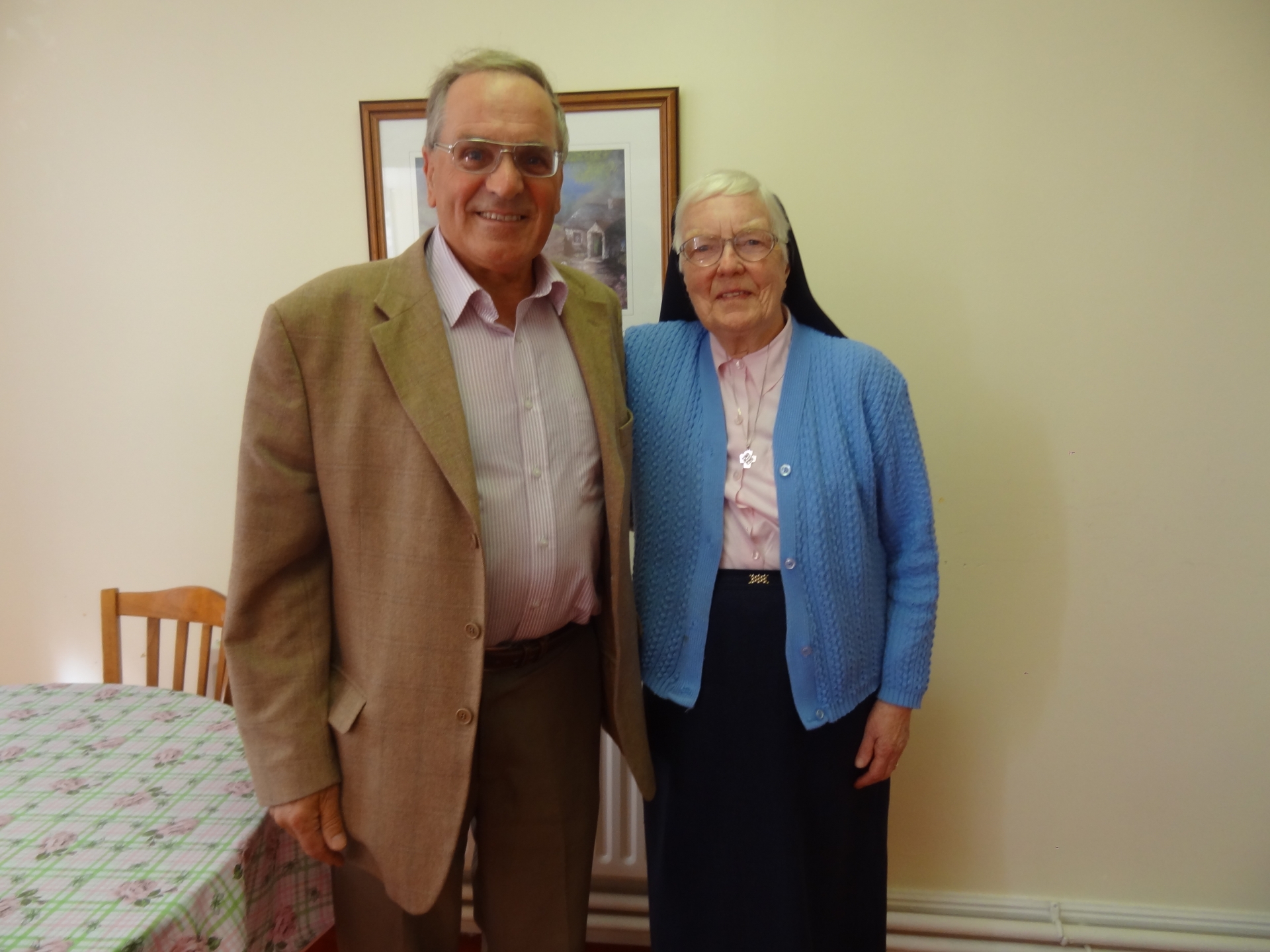 Pictured above: Teddy Fennelly has always kept in touch with his first teacher and lifelong friend, Sr. Paula. This picture was taken in 2015.

That was the legacy that Sr. Paula left behind when she left Portlaoise in 1983 to take up a new appointment with the Presentation Sisters in Shantalla in Galway in 1983.

Incredibly that was 37 years ago and this year several generations of Portlaoise people will join with me in extending the good wishes of the community to this remarkable woman on celebrating her 100th birthday on Monday next, 17 August.

Ask any teacher about the difficulties and strain involved in such a responsibility as having a big bunch of four and five years olds in your care five days for most weeks of the year and one can readily appreciate the extraordinary talents and patience needed to do the job well at all times. 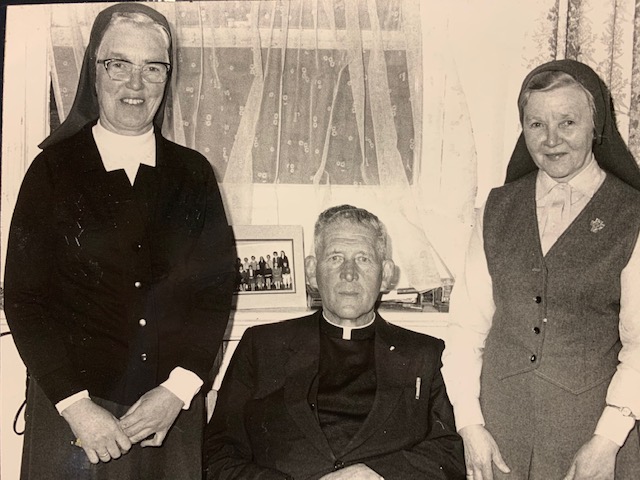 Then consider the numbers of new pupils, from very diverse backgrounds, involved in any given year in a growing county town with only one such class for both boys and girls.

Then multiply that by 40+ years and with classes of mostly over 50 and the number soars to something in the region of 2,000 first day pupils.

Then think of their mammies and daddies of every make and temperament and still manage to keep them all happy. Well that was Sr. Paula.

She had one brother and one sister in her family, both of whom are now deceased.

Having spent two years in teachers’ training at Carysford College, her first appointment was Portlaoise in 1942.

After a few months teaching 4th Class, she was put in charge of the Junior Infants, or as they were known then, and for many years later, the Ha’penny Babies.

It must be remembered that the 1940s and ‘50s was a different Ireland and a different world than the one in which we live today. 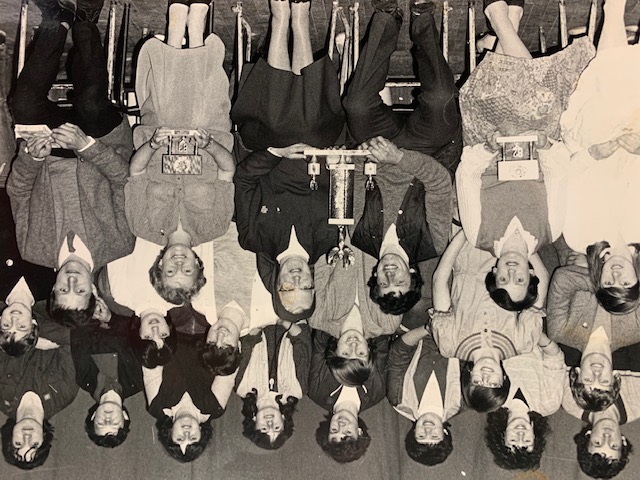 Pictured above: Wille Aird, Leader of the Blacksheep Foroige group in Portlaoise presents their  ‘Person of the Year’ Award to Sr. Paula in the 1980s in the company of other Award winners and Blacksheep members.

When Sr. Paula arrived in Portlaoise, World War Two was at its height and this country, though not involved directly in the war, was in a state of national emergency. People lived frugal lives during those years and in the post-war period.

It is difficult for later generations to understand or appreciate such a difficult time when food was rationed, money was scarce, disease was rampant and there was no such thing as running water or flush toilets in most homes. Radio was relatively new, the content was sparse and the reception was often erratic but it was the main means of keeping people informed of what was happening in the outside world.

The Presentation nuns were an enclosed Order in those days and the sisters were not allowed to leave the confines of their convent. That was one of the rigorous rules under which Sr. Paula and her confreres functioned until the regulations were relaxed in 1967.

Just a year before the change, in 1966, she got word that her mother was not well and was housebound.

She remembers writing a letter to the Bishop of the Limerick Diocese, explaining the plight of her mother and her wish to go see her.

She was granted special permission to make her visit home and has always since cherished the memory “of being there, sitting in a chair and being so happy to be home with my dear mother and family again”.

She felt it was an “unbelievable experience”.

She continued to teach in Portlaoise until 1983 when she was transferred to Galway for a number of years. But she always felt that her heart was in Portlaoise and she returned to the town and lived with other nuns in O’Moore Place. 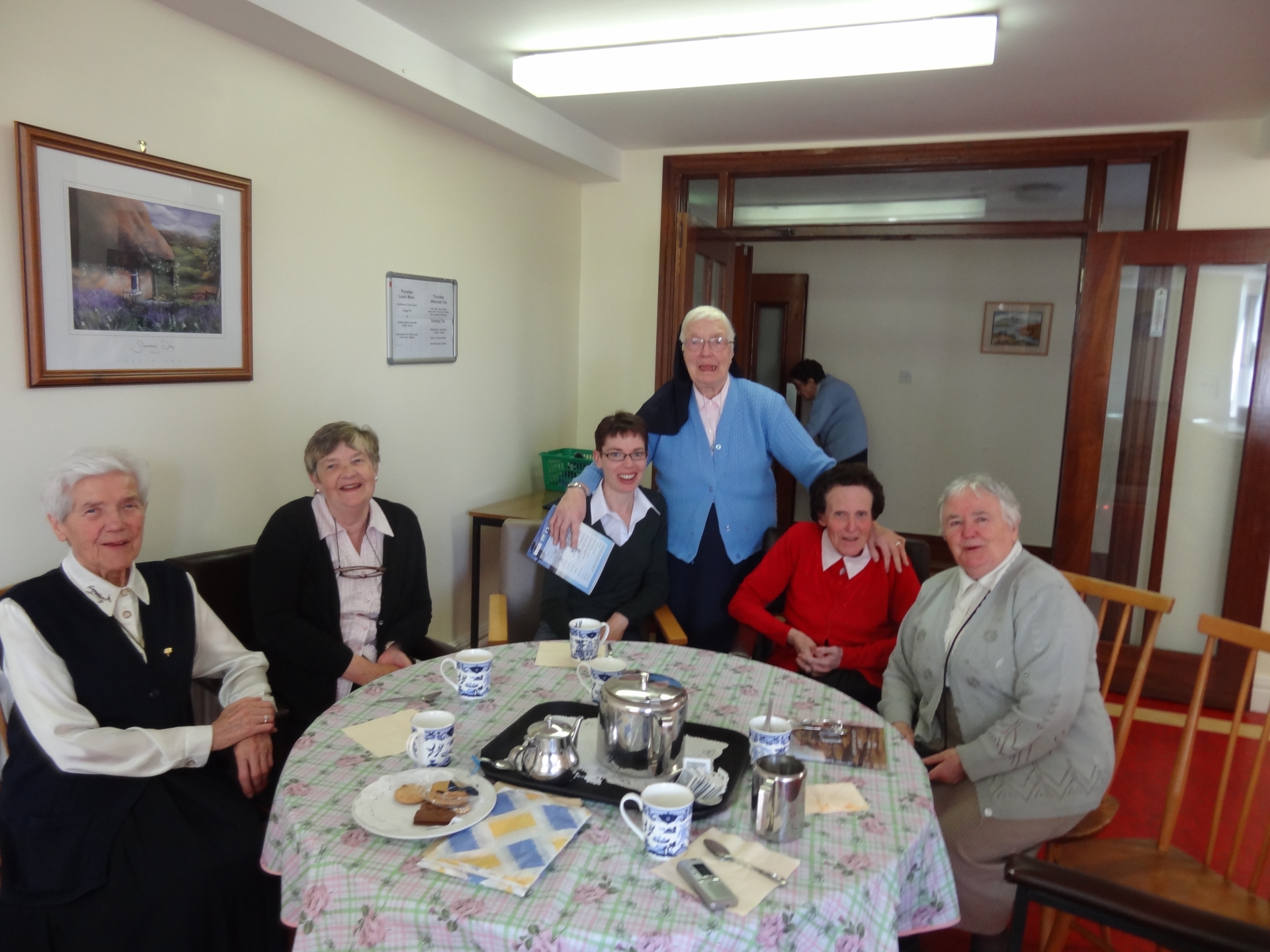 Pictured above: Sr. Consolata, Carmel Fennelly, Mary Fennelly, Sr. Paula (standing), Sr. Justin and Sr. Francesca pictured at the Shalom Nursing Home for retired Sisters of the Presentation Order in Kilcock, County Kildare, in 2015. All the sisters spent many years teaching in Portlaoise.

For the past number of years Sr. Paula has been living happily in retirement in Shalom, a nursing home for retired nuns in Kilcock, County Kildare. She always held her time in Portlaoise as very special and retained close friendships with her numerous acquaintances and admirers in the town, and looks forward to, and enjoys the company of, her many visitors.

She retains her bright and cheerful disposition and, up to recent times, had a remarkable memory of the families and events in the town of Portlaoise over all those years and of names and personalities of her thousands of little admirers who invariably remember with fondness their first day in school and the ray of sunshine in the smile of their first teacher.

If ever there was a person who deserves the accolades of her friends, she is certainly one, after her lifetime of devoted and unstinting service to the people of the town and the lifelong happy memories she left with all the young people who started their school days in her happy class.

How do I know all these things?

Well, I was one of Sr. Paula’s young starters in Ha’penny Babies and she always was, and still is, my favourite person, outside my family, on this earth! 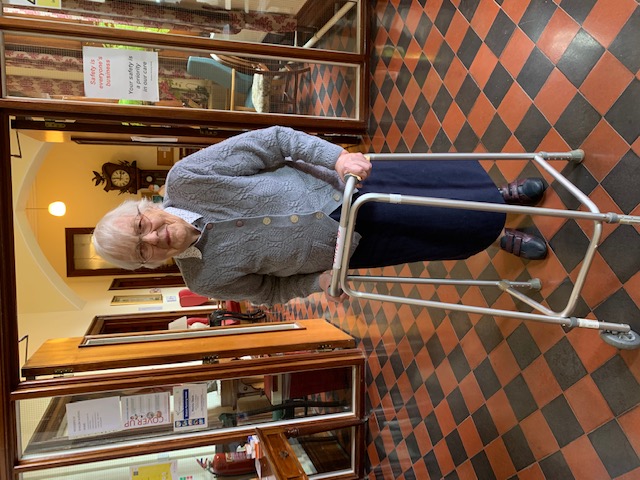