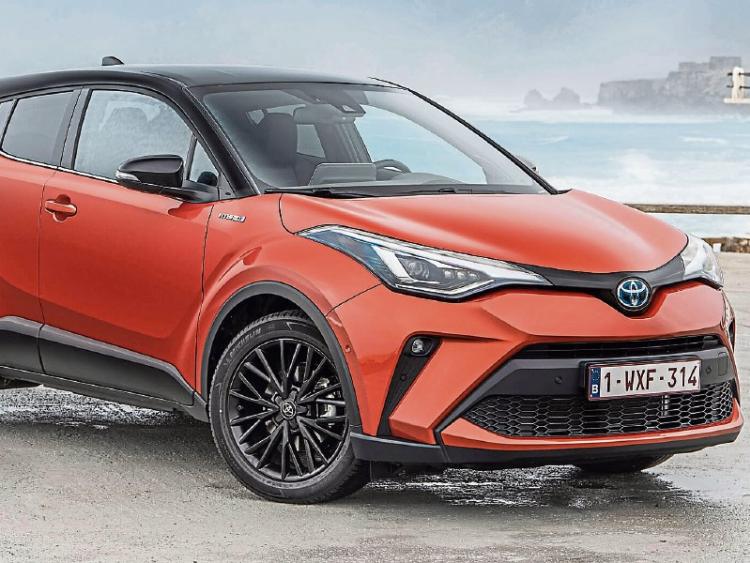 The 5-door CH-R was designed exclusively with European buyers in mind. Toyota put a lot of research and development into this car in order to ensure its success in a very competitive sector of the motor market.

Not surprisingly its sold well since its launch selling over 400,000 units in Europe.

CH-R stands for Coupe High Rider, and its funky style certainly lives up to the name. Now there is freshen up of the range and the launch edition is called the CH-R Orange Edition.

There is no doubt that Toyota certainly got it right with the style. The CH-R looks simply fabulous. With dramatic lines, a really distinctive shape, those disguised rear door handles and sporty overtones it will appeal to a younger audience who want something a bit different. So it really does have kerb appeal! Revised bumpers and lights are all that distinguish the new model.

The first thing that is apparent is the high quality of the interior. There are plenty of clever design touches too all which go to create a really upmarket feel to the CH-R.

There is plenty of standard kit and safety features include Toyota “Safety Sense” pre-collision warning as wells adaptive cruise control, lane departure alert, auto high beam, road sign assist, blind spot monitor and park assist. All models get 17 inch alloys, reversing camera, dual zone climate control, rain sensor, and a leather clad multi-function steering wheel. As you move up from the base Luna to Sol, and Sol Sport you obviously get even more, such as 18 inch alloys, Sat Nav and so forth. The new Orange Edition comes fully kitted out and really is comprehensively equipped. Connectivity is much improved with Apple Car Play and Android Auto.

The rear is quite roomy but does feel rather claustrophobic due to the very high door line, which also restricts rearward visibility when parking.

The 377 litre boot is a bit on the small side compared to rivals but its adequate.

What Is under the bonnet?

The 2.0 litre 184bhp “self charging” hybrid performs quite well utilising a CVT transmission to put the power to the front wheels.

It really only runs on battery power at very low speeds or in slow city traffic, otherwise the petrol engine is doing all the work. That engine is quite noisy too when revved but fine while cruising at motorway speeds.

On the economy front I returned 6.1 litres per 100km which is about average for a car in this class. Im not yet convinced about hybrids as while the petrol engine is doing the work (most of the time) your lugging around a big battery and electric motor thus impacting economy due the extra weight penalty.

In short yes! It is agile and nimble and will hustle along a twisty road with poise and precision. I enjoyed the way in which it gets down the road. Around town its compact dimensions make it easy to live with and it proves quite refined though I did feel there was and more wind noise than I expected at motorway speeds.

So What is the final verdict?

Toyota have gone for dramatic good looks, plenty of standard kit, a rewarding driving experience and a a real high quality feel to draw buyers away from more practical rivals.

The revised CH-R will appeal to those who value those qualities above a bigger rear cabin or larger boot. The style conscious buyer will like the CH-R. Prices start at €32,470 the launch Orange Edition tested costs €39,115.