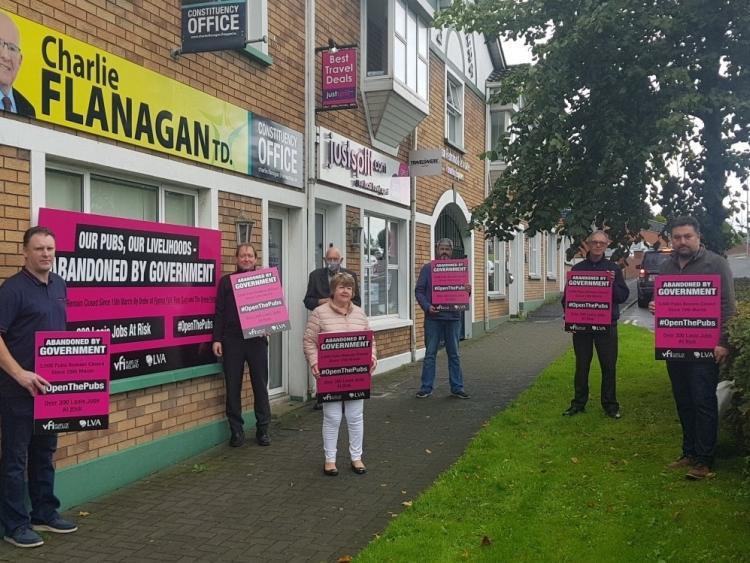 Below: Sean Fleming with the protesters.

With a campaign called #OpenThePubs, the publicans who are members of the Vintners Federation of Ireland are asking for "wet" pubs to be allowed to reopen.

Last Saturday night Laois pubs held a #LightUpLaoisPubs night, when they all turned on the lights in solidarity for their campaign to be allowed to reopen.

Padraig Cribben, Chief Executive of the VFI recently called for extra support for pubs who are forced to stay closed.

"The need for a special support package for pubs who are still closed has been directly conveyed by the two vintner groups during meetings with Taoiseach Micheál Martin TD, Tánaiste Leo Varadkar TD and Minister for Public Expenditure and Reform, Michael McGrath TD held over the past few weeks.

“As we have made clear from the outset of this crisis, pubs want the opportunity to trade responsibly. The pubs that are still closed can’t wait to get their doors open again, to interact with their customers and to earn a living. These businesses will abide by the public health requirements, they just want the same chance as was granted to the rest of the economy.

“The clear preference of these pubs is to reopen, but if the Government won’t let them then they owe these pubs special support. They are being denied their right to trade due to the public health situation and they should receive meaningful assistance for as long as that continues. It is also critical that should there be any further delays to reopening that the Government simultaneously announces a support package. The survival of these businesses depends on it,” he said.