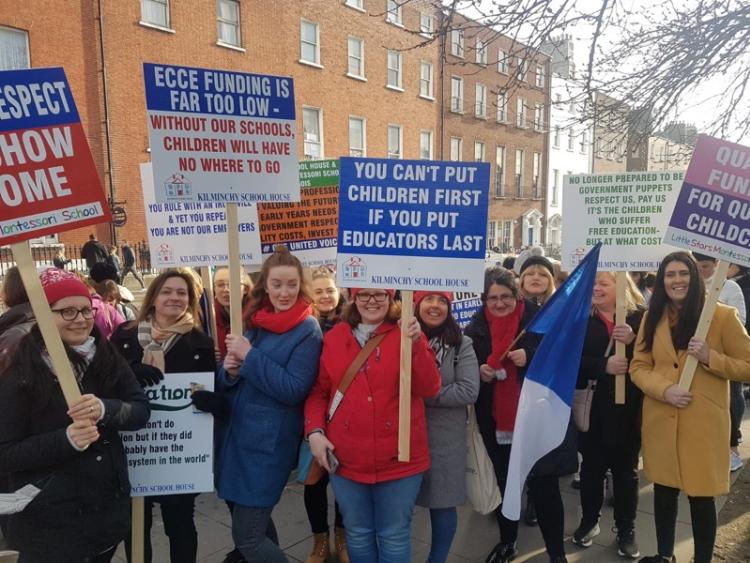 Early Childhood Ireland wants all TDs in Laois to commit to ensuring investment in the childcare sector is increased in Budget 2021.

Frances Byrne, Director of Policy with Early Childhood Ireland, set out what is needed.

“Substantially increased investment for early years and school-age childcare must be an immediate and sustained focus for the new Government. Budget 2021 will be the first test of how well they meet this challenge," she said.

The organisation wants Minister of State Seán Fleming, Brian Stanley and Charlie Flanagan to back the campaign.

“We are calling on TDs in Laois to back our call for increased investment in childcare in Budget 2021. Our members in Laois and nationwide will continue to engage with local politicians on this issue between now and Budget Day on 13th October,” she said.

Ms Byrne said Ireland has a bad record when it comes to spending on childcare.

"Ireland has consistently remained at the bottom of the class when it comes to investment in childcare. According to the OECD, we invest the least amount in early years of any developed country as a percentage of GDP.

“In Budget 2021, as well as increasing funding for childcare, the Government must also state how it plans to increase investment to 1% of GDP over the next four years. If the Government is serious about their commitments in the Programme for Government, then a multi-annual plan is needed," she said.

Ms Byrne said an immediate focus for the coming year needs to be on ensuring the sustainability of childcare services in the wake of the Covid-19 pandemic.

“Initially, increased investment in childcare next year must focus on retaining the Employment Wage Support Scheme for the childcare sector,” she said. “This can act as a bridging measure to help stabilise early years and school-age provision, as settings need to adjust to working with the public health issues arising from Covid-19.

“It is unrealistic for the Government to expect the sector to resume a broken ‘business as usual’ model of operation from 1st January next year. Additional Covid-19-specific supports will be necessary until a vaccine or treatment is widely available,” she said.

The organisation set out the consequences of Low Investment Levels in childcare.

“Low investment in childcare is bad for children because it leads to high levels of staff turnover and poor outcomes,” continued Ms. Byrne. “It is bad for parents because it leads to high fees and no guaranteed crèche places. It’s bad for staff because they receive low wages and have poor working conditions. It’s bad for providers as they’re operating in a constant state of uncertainty and can’t make any long-term plans. And, ultimately, it’s bad for society because – for as long as the Government under-funds childcare – we will have parents locked out of the workforce and children getting an unequal start in life.

“Budget 2021 is an opportunity for the Government to literally put its money where its mouth is. The Programme for Government – and the election manifestoes of the parties that make up the Government – contained promises about improving our childcare sector. Now, we’re calling for action and investment to make those promises come true,” concluded Ms Byrne

Early Childhood Ireland supports 3,800 childcare members, who – in turn – support over 100,000 children and their families through preschool, afterschool, and full day-care provision nationwide.