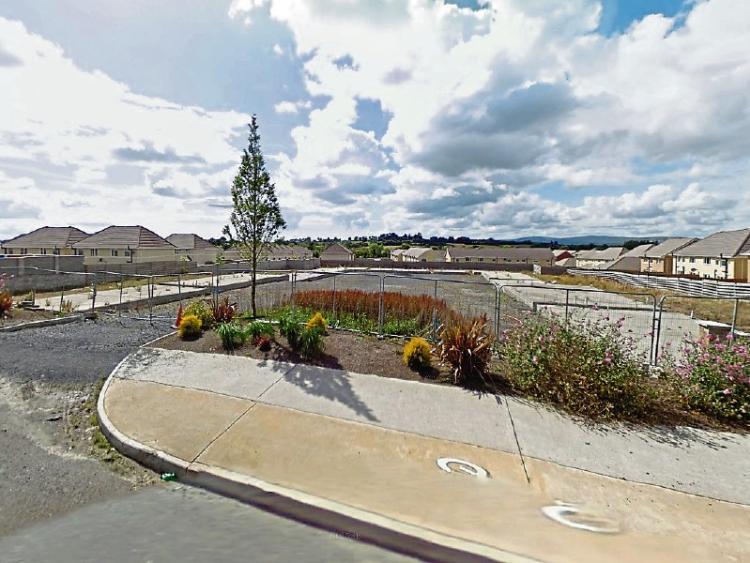 Parts of an unfinished Portlaoise housing estate have been described as dangerous and a nightmare, with Laois County Council asked to take action to improve them.

While sections of Maryborough Village on the Mountrath Road are “pristine”, others are “a mess” according to Cllr Caroline Dwane Stanley.

She raised concerns about two sections in the estate, Market Mews and a road near the back of the development, in her motion tabled to the September meeting of the Portlaoise Municipal District.

Market Mews was planned to be a shopping area near the front of Maryborough Village estate. Years on it only has foundations, but planning permission remains valid, having been renewed three times.

Cllr Dwane Stanley asked the council to do a Compulsory Purchase Order on it.

“There is a high foundation where the site is to be used for a shop. There are pipes, wiring, holes and broken fencing. It’s dangerous.

“The planning section have been brilliant, they told me they have engaged with the developer. I’m asking that the council continue to put pressure on the developer.

“I don’t want that site left there for 15 years looking like a shambles. Ask the developer to screen off the site, and when he asks for a renewal of permission again, that some work be started,” she said.

She also asked the council to take in charge a road at the back of the estate, and reinstate the boundary fence beside the river.

“Residents want ramps, but we couldn’t do this because it’s not taken in charge. If you’re driving down to phase two it looks pristine but where the council housing area is is a mess.

“There are a huge amount of children in the area, and elderly people living in the bungalows,” Cllr Dwane Stanley said.

“I understand that the developer says he has no problem with us putting a ramp in but we can’t spend public money on what is a private road,” she said.

“At the back there is a long fence beside a stream, it’s in bits. This area is very built up, they have a new residents association. We’re making progress with ramps but the site has to be addressed, when you drive around the back it is a nightmare,” she said, thanking council staff for positive feedback.

Angela McEvoy is senior planner for Laois County Council and gave a reply to the motion. She said that the retail area has live permission until December 31 2021.

“It is my understanding that this area is intended to be a retail development as part of the housing development. The developer intends to complete this.

“The road will be taken in charge when the estate is completed. Laois County Council’s housing section will seek quotes for the repair of this fence. Subject to funding they will proceed with this repair,” Ms McEvoy said.