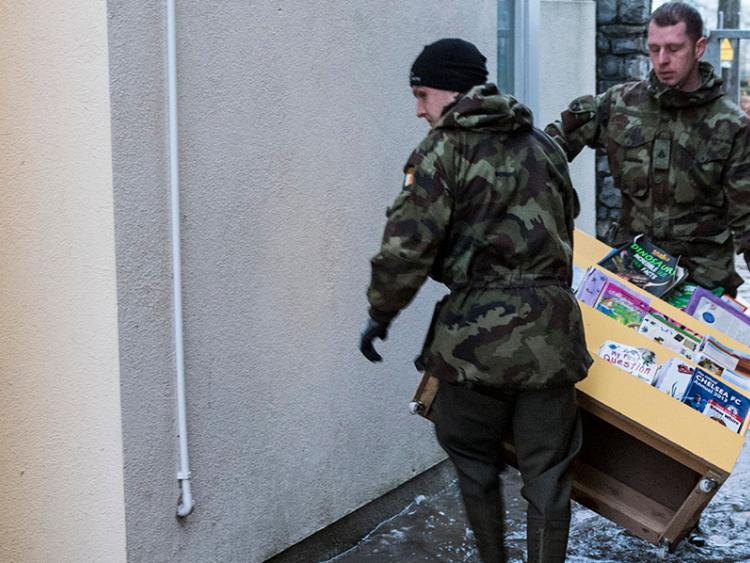 Flood defence work delays in Mountmellick and the refusal to help Mountrath was raised with the national agency responsible for flood surveys and defences in the Dáil this week by Laois Offaly TD Brian Stanley.

The Sinn Féin TD used his position as Chairman of the powerful Dáil Public Accounts Committee to get from senior officials in the Office of Public works.

Dep Stanley said he raised a number of flooding issues in Mountmellick and Mountrath and the frustrations of residents.

“On the overall schemes, there is much frustration and disappointment about the length of time it takes to carry out surveys, studies, the examination of the sites and the work on the contracts and the tenders. I am talking about the period from when the work starts to seeing the actual physical work commence.

"I understand that environmental impact assessments, EIAs, have to be done and that there are many requirements on the OPW but the chairman might deal with that," he said.

He put the spotlight first on Mountmellick which was hit hard by flooding in 2017.

"With regard to the Mountmellick scheme, Mountmellick suffered very badly three years ago as a result of very severe flooding. Many houses and businesses were impacted," he said.

He asked: "When can we hope to see shovels in the ground in Mountmellick and those flood defences being put in place?"

In reply, Maurice Buckley, Chairman of the OPW said, many schemes are being worked on.

“I am looking at Mountmellick here, which has a €3 million to €3.5 million project budget. I feel the Chairman's frustration, and it is a frustration many Deputies (TDs) feel, and the public. It does take time. It takes time in other countries as well. We have to start early. What we are doing in the OPW is bringing forward as many schemes as possible to go in parallel so that we can prevent that." he said.

Deputy Stanley asked for a follow-up. The Laois Offaly TD also queried OPW officials about Mountrath which has not been given the goahead for flood defences.

"A scheme was put in for Mountrath and it was not backed by the OPW on the basis of value for money. There were two weirs. One of them was taken out. The remaining one is causing problems. It is increasing the water levels in the river by about 1 m to 1.2 m. I find it hard to understand the value for money argument because many of the people living in Patrick Street and in Dunne's Terrace, in Mountrath, had to abandon their houses so they would say it does represent value for money.

"There is a pipe underneath a bridge that has to be removed and something has to be done with the weir. I am aware that minor works have been approved for the Shannon Street area that the council are opening but I am asking that the OPW would go back and look at that issue again.

"I do not see it being a huge cost issue in terms of resolving the issues on the Whitehorse river, in Mountrath. In terms of value for money, people need peace of mind.

"In the cost-benefit analysis can Mr. Sydenham take into consideration the households in Patrick Street, Dunne's Terrace and Stillbrook? It is the residents who are either at risk of flooding or have been flooded in the past,” said Dep Stanley

John Sydenham Commissioner, Flood Risk Management of the OPW replied that there are budgets to consider.

“There has to be finite limits on what we can spend relative to what we are protecting but in this instance, we would be confident that we may be able to come up with a solution by reviewing the scheme in partnership with the council,” he said.

Work got underway this week in Mountmellick on groundworks to test for the location of walls and other defences. A new scheme was promised after a deluge devastated parts of the town in November 2017.

While design contracts have been signed, no deal is in place to build the walls and install other works to protect the town from a repeat of what happened in 2017.