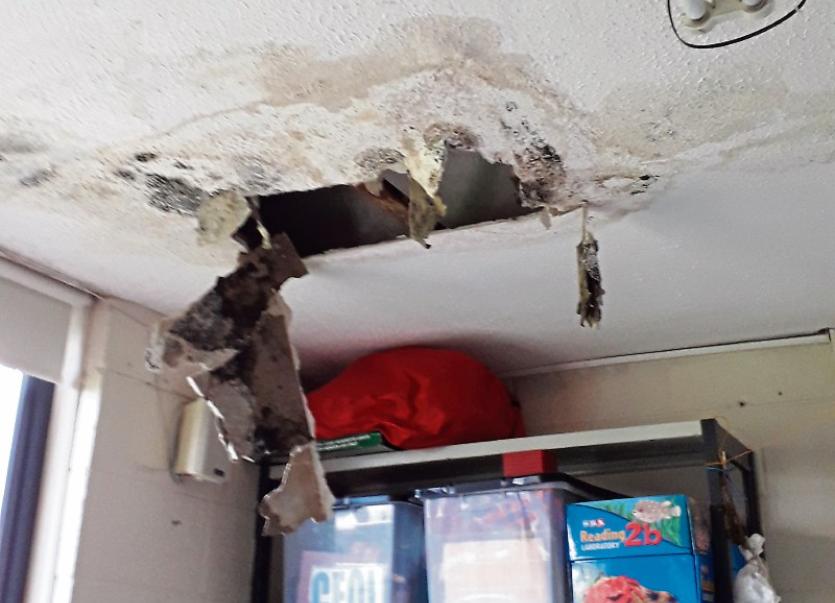 Leaking roofs, broken sewerage and electrical issues which have rendered parts of a busy Laois school off-limits due to the health and safety hazards for children and staff will be given 'ugent priority' according to Laois Offaly TD and Minister Sean Fleming who met with the Minister for Education this week.

The Minister of State at the Department of Finance said he had 'an extensive meeting' with the Minister for Education, Norma Foley this week in connection with Scoil Mhuire, Abbeyleix.

In a statement, the Fianna Fáil TD said he acknowledged the 'excellent case' made by the school principal Aidan McEvoy and Willie Swayne, Chairperson of the Board of Management in the detail briefing note that they provided for discussion with the Minister.

"This note on the dreadful state of conditions in the school dealt specifically with the roof system, sewerage system, insulation in the school building, the electrical system and serious and ongoing damp and mould issues in the school.

"I outlined the patchwork job that her officials had only allowed be completed during the summer and highlighted that it was a view of the school that it was an actual waste of taxpayers money because a proper re-assessment of the whole school should have been looked at," said the TD.

Dep Fleming questioned the approach of the Department of Education to the issue to date.

"We have the unusual situation that sometimes an engineer comes from the Department of Education to see what is done and they have said quote “I’m only here to look at the roof, Im not looking at the sewerage system or the rooms. A separate engineer will come back and look at another aspect”.

"There has been no proper joined-up examination of the need for a new school or a total refurbishment of the school, by officials in the Department of Education. This is why I met directly with the Minister and she has given an undertaking to have the matter fully examined and reported back to her," he said.

The Minister of State added that he has had given assurances about the problems being solved.

"I want to assure all the school community, both the staff, pupils and the parents and families involved in the school that this matter will be given urgent priority, to see the next step forward for the school.

"I want to assure everyone involved with the school that this is a top priority for me in my dealings with the Department of Education and I will report back as soon as I have further information on this matter," he said.

The statement did outline what specific actions would now take place.

The issue was aired in public with Laois Offaly General Election candidates last February at an INTO meeting in Portlaoise. It is more than a year since Minister Fleming and other Laois TDs and public representatives saw the problems first hand.

Partially collapsed, clogged toilets, damp are just some of the issues. Buckets had to be placed in classrooms to collect rain water. Classrooms were sealed off because of the problems. Parents said the sewerage problems have led to a constant odour in the school.

"I can't believe how bad it is," parent Ciara Phelan told the meeting in February.

In an impassioned plea to the politicians, she said the nearly 40-year-old building was leaking constantly, there are a bad damp problem and the sewerage system 'doesn't exist'.

She described a situation which a toilet overflowed on one of the children.

"The school is not safe for pupils or staff," she said.