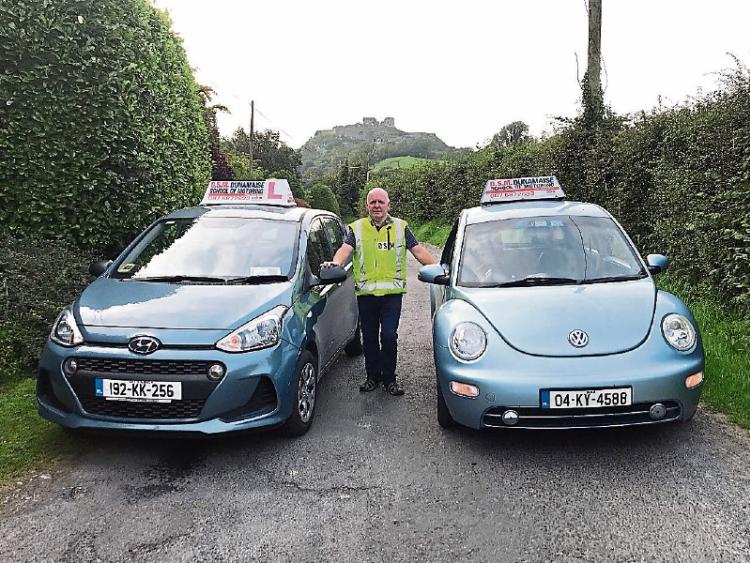 Jimmy Shiels spent three six months trips overseas when a member of the Irish Army. He served in South Lebanon, Rwanda and Sierra at a time when these countries were immersed in war and bodies lay strewn on the ground as if they were wildlife.

Did it frighten the man born in Ralish Abbeyleix? He says no. At the time it was regarded as a day’s work. After he retired Jimmy founded a school of motoring named after his towns land which he describes as the most beautiful place any one could live and the neighbours “simply the best.”

Jimmy received his education with the Patrician Brothers in Abbeyleix and he loved school. He enjoyed sport, especially hurling and athletics but after the Christian Brothers he had to work being one of a family of ten girls and six brothers so, to keep the wolf away from the door, he was lucky getting work on a building site as soon as he flung the schoolbag under the attic. In retirement he will be busy because that is how it has been since his days in Abbeyleix.

Jimmy should know because for 45 years he and his wife Ann Roche have spent their life there rearing six children and now grandchildren.

When they married they lived in a mobile home while building the family residence and, more recently, he and Ann surrendered the house to his son after he and his son had restored an old family cottage to their satisfaction and that is where he and Ann hope to spend the rest of their life.

Why did he take up the Dunamaise School of Motoring? Well the answer he gives is that having spent time abroad with the Army and later in the Cadet School in the Curragh training Cadets he learned the importance of driving and commuting to the Curragh every day.

The dual carriageway and the volume of traffic taught him that there were many drivers less than capable of driving. Many were capable but needed to learn the rules of the road.

At the time the powers that be did not take road traffic seriously but when the RSA got more support and things changed, Jimmy felt qualified and soon he was much in demand and there was a steady queue of people awaiting driving tests and they needed driving lessons, although at the time it was not compulsory.

Then eight years ago after pressure from the RSA the Government introduced a new law where anyone wishing to take a driving test must take 12 step up driving lessons with a qualified instructor. Jimmy had undergone months of studying as instructors needed to up their game as well in order that they could relay this to their students.

Then, in 2011 he was invited to the passing out parade in Dublin organised by the RSA and he was thrilled when he was called out to receive his certification and he became the first Laois man to be chosen as a senior instructor and present to present the citation was Mr Gay Byrne who was the head of RSA road safety at the time. That meant of course he was very much in demand being the only qualified instructor covering the entire county.

Jimmy delighted in teaching young and old and he got great satisfaction from meeting male and female drivers after they had passed their driving tests.

Many remarked how difficult it was and many claimed they did not sleep the night before their test and poor St Martin, St Anthony and St Jude must have being tested to the limit.

Recently, Jimmy has being helping drivers to adapt to driving on the motorway. He says many experienced drivers are still nervous of the wide open spaces but he tries to encourage them that when they get confidence the motorway can be much safer than the bye roads and many secondary routes.

The RSA have yet to appoint instructors for this very important task but he hopes they will in the near future. In the meantime he will continue to help people who need encouragement to take to the highways and byways.

What does he intend spending his time at now that he is retired?

Frst he worked on a building site but the work was hard and at 19 he joined the Irish Army, a job he loved most of it spent around the Curragh. He took retirement after 25 years but still maintains contact through the Retired United Nations Vets organisation, Then, after another 25 years instructing young and old drivers. First of all he points to running nine Dublin City Marathons for various charities and regrets it could not take place this year.

For years he has travelled to Holy places like Holy Cross Abbey, Knock Shrine, Medugorie, Fatima, and Lourdes as a helper with handicapped people and mainly wheelchair people and gets great satisfaction meeting all these pilgrims year in year out.

He is also a member of the Nights of Columbanus, Senior Citizens, Fatima Group, Lourdes group, Eucharistic Minister at the Heath or Ratheniska Church when Mass resumes. He, of course, is a great supporter of Ratheniska GAA. Asked if he might take up golf now that he has time on his hand he paused and replied, “I will have to discuss that one with Ann” whom he describes as his guiding light.

What he would like to conclude with is saying thanks to all his past pupils who were always courteous and although not everybody passed the test at the first attempt they never laid the blame on his shoulders.

One word of advice to future drivers is to try and remain calm on the days before your test. Testers often remarked that some students and adults are failures before they sit behind the wheel. They are good drivers but allow nerves to ruin their big day. Concluding the popular Dunamaise instructor has one final message, “Stay safe and drive carefully”.