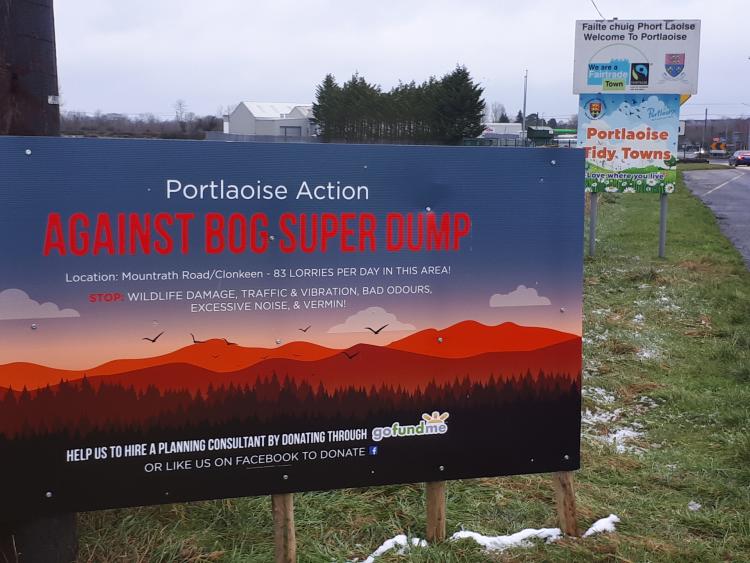 Bord na Móna is facing renewed opposition in Laois to its first big project since giving up peat production in the form of appeals to An Bord Pleanála and 'super dump' billboards objecting to the project near Portlaoise.
The Portlaoise Action Against Bog Superdump campaign recently lost its fight against the project at Laois County Council. The planning authority gave planning permission to a big biowaste plant on the Mountrath Road.
The anaerobic digestor will make gas and fertiliser by rotting 80,000 tonnes of domestic and commercial waste near the town.
But many residents opposed the plan and a campaign group has taken steps to show it intends to continue the fight.
The group has erected two large signs on the Mountrath road at the entrance to Portlaoise. The plant will be built nearby on the edge of a bog where Bord na Móna harvested peat for many years.
Ann Byrne is the chair of the local group. She explained why the committee put the signs up.
"We are opposing the devastating approval by Laois County Council on January 4 for the anaerobic digestor in Clonboyne off (M7) exit 18," she said.
The signs went up in the days before the deadline to appeal Laois County Council's decision to An Bord Pleanála on Monday, January 25 at 4pm.
Bord na Móna, which owns the big waste company AES, has said that thousands of truck journeys will be needed every year to transport the raw material. Trucks or other heavy vehicles will also be needed to bring the fertiliser produced to farms.
Some of the waste and byproduct will come and go via the motorway while other vehicles are likely to have to travel through Portlaoise.
Bord na Mona says the gas produced through the contained rapid rotting process will be fed into the national grid via a new pipeline along the Mountrath road.
The company says the rapid rotting process will be carried out in a sealed structure while a pond will be used to collect fluid or leachate produced during the process.
It is just over a decade since AES failed in a bid to build a similar facility at the Kyletalesha landfill on the N80 Mountmellick road near Portlaoise. It failed because of traffic problems and no obvious plan for the leachate.
Bord na Móna announced the end of all peat harvesting operations in Laois and across the Midlands just over a week after the council approved its biowaste plan.

Chief Executive Tom Donnellan said at the time that the State-owned firm, which has a remit for economic development in Laois and other midland counties, is now focused on renewable energy generation, recycling and developing other low carbon enterprises.

“As we have put our new climate-focused business in place, we have also completely stopped a number of high carbon operations and transitioned others to a more sustainable model," he said.