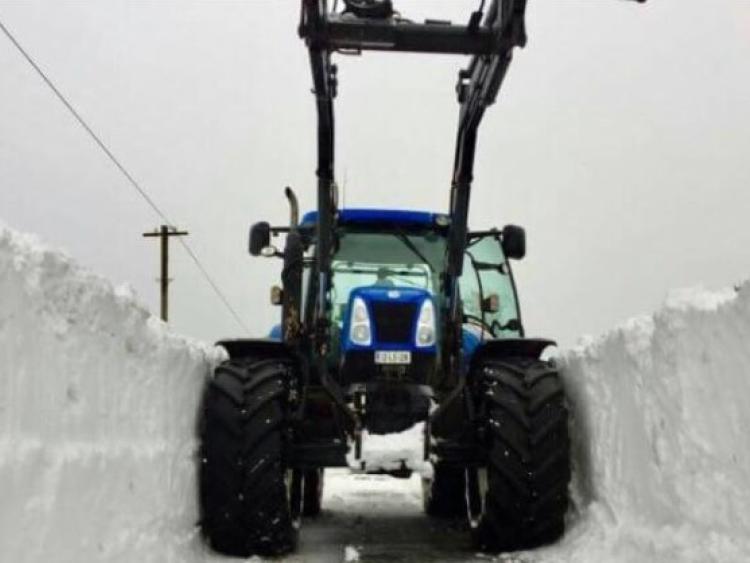 A weather scene in Laois in 2018 during Storm Emma

Met Éireann's chief weather forecaster has warned that her office is on 'high alert' as storm heading towards Ireland next week which could result in 'very inclement' wintry weather and poses a 'high risk of snow'.

Speaking on RTÉ Evelyn Cusack, Met Éireann Head of Forecasting, outlined what to expect in the coming days as wet weather meets a cold front over Ireland. While it will get colder over the weekend concerns are growing around the days from Monday onwards with the potential for snow across the country.

"Some snow showers on the east on Sunday and Monday, from Louth down to Wicklow, just some snow flurries. A little bit more widespread on Tuesday on the east and across the midlands some heavier snow showers.

"From Wednesday night and the second half of next week, a storm system is pushing in from the Atlantic towards western Europe and that has the potential to cause some very inclement conditions...February is one of our coldest months so snow is always at high risk and certainly we are on high alert in Met Éireann for next week," she told Brian Dobson on RTE 1 News at One radio news bulletin on Thursday.

The conditions expected are similar to the situation in 2018 when Atlantic Storm Emma collided with the Beast from the East over Ireland. The climactic situation is not as cold this year as the 2018 Beast originated in Siberia while the cold front to the east of Ireland on this occasion originates in the less frigid Scandinavia.

However, the cause of the cold block which has sat over Scotland since the start of 2020 is blamed on a Sudden Stratospheric Event which also caused the 2018 conditions.

The Met Éireann national outlook is for bitterly cold and wintry from the weekend and into next week. Met Éireann's 7 day weather charts show a number of stormy weather systems driving over Ireland in the week ahead. MORE BELOW TWEET.

Here is our 10 day Atlantic Chart, showing the pressure and precipitation forecast in 6 hour intervals.https://t.co/9Giuj4CR5mhttps://t.co/9gKN6SVok4 pic.twitter.com/qscXnPAJ5I

Latest weather forecast from Met Éireann fro the weekend and into next week.

FRIDAY
Many areas will start off dry tomorrow with sunny spells. However, showers will feed into eastern and western coastal counties during the morning, spreading further inland during the afternoon and evening. Some wintry falls are possible on higher ground in the southwest later. Cold with highest temperatures of 4 to 7 degrees in light variable breezes.

FRIDAY: Clear spells and well scattered showers, mainly across Munster early on, and later across northern and eastern coasts. There will be the risk of hail and isolated thunderstorms. Frost and possible icy stretches too, in light variable mostly northerly breezes. Cold with lowest temperatures of -2 to +2 degrees Celsius.

SATURDAY: Frost and any ice clearing. A cold day and mostly cloudy day with scattered showers - mainly across the eastern half of Ireland. Showers may merge into longer spells of rain across some eastern counties with the risk of hail here. Highest temperatures of 4 to 7 degrees Celsius in mostly moderate northeasterly breezes.

Some showers across eastern counties on Saturday night, otherwise mostly dry under broken cloud. Some frost and possible ice with lowest temperatures of -1 to +2 degrees Celsius.

SUNDAY: Colder again on Sunday with highest temperatures of just 2 to 5 degrees Celsius in a rather brisk northeast wind. Most areas will however stay fully dry albeit cloudy. Isolated wintry showers may occur.

Very cold with a widespread frost and ice at night. Scattered wintry showers will move into eastern counties and across northern coasts with a possible dusting of snow possible. Lowest temperatures of -3 to 0 degrees Celsius in moderate northeast winds, fresher along Irish Sea coasts.

NEXT WEEK: Current indications suggest it will turn even colder into next week with sharp to severe frost and ice. Falls of sleet and snow are expected, mainly over east Leinster for the early days of the week.