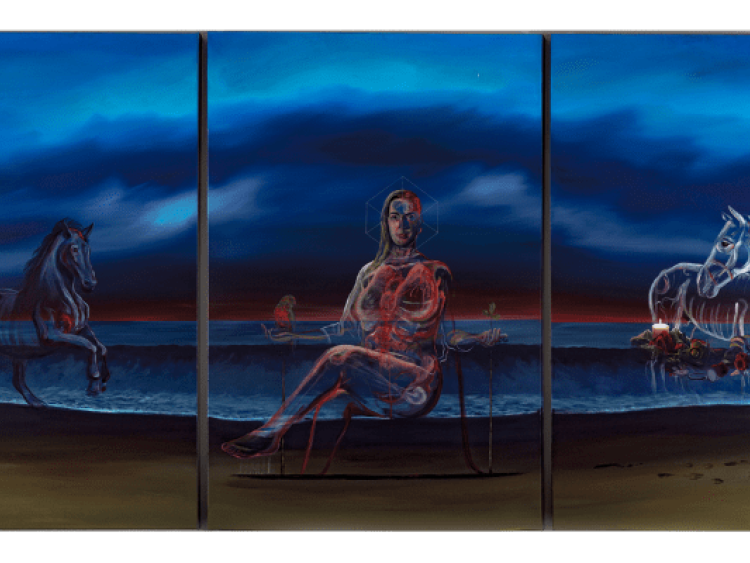 The triptych portrait of the Kilkenny mum was sold under auction at Sheppards’ Irish Auction House in Durrow.

The portrait went on sale on the Laois Kilkenny border and was appropriately purchased by a Kilkenny buyer for €46,500. The famous Laois auction house included its fees to bring the total raised beyond €55,000.

Sheppard’s say they donated fees of just over €9,600 from the sale.

The purchaser of the portrait is Mooncoin-based businessman David Brennan.

The work, by Vincent Devine from Tullamore, is expected to go on public display later this year once Covid restrictions are eased.

The Heroes Aid charity will benefit from the fund to continue its work in helping Ireland's health workers safely battle the pandemic and save lives through the purchase of PPE and other equipment. Conor McGregor is among those who have also lent their support to the charity.

They tweeted their delight at the sale the picture of Vicky who is now in America getting treatment for her cancer. MORE BELOW TWEET.

Historic portrait of @PhelanVicky by artist @vincent_devine has just sold at auction for an amazing €46,500.

Thanks to @SheppardsDurrow for generously hosting the auction

Thanks also to all of you- your support means the funds will help frontline healthcare workers pic.twitter.com/787E6VnjvD

This artwork was commissioned by Heroes Aid in honour of Vicky who is also a member of its board member in recognition of her outstanding contribution to women’s health in Ireland.

The charity says it approached Vicky in 2020 to be a member of the board.

"We had been incredibly impressed by her ability to give a voice to those who needed it most and knew she’d play a crucial role in helping our country’s vulnerable healthcare workers who have been placed under unrelenting pressure since the outbreak of the Covid-19 pandemic. It’s only fitting that she now has a portrait to tell her own story," they say.

Heros said the painting was generously donated by the Offaly artist who has worked closely with our charity since its inception and also designed our logo.

The Portrait Explained:
Straddling the boundaries of Realism, Surrealism and Expressionism, Devine has infused the portrait with a mysterious pulse that resonates beyond the canvas. Reading from left to right, Vicky Phelan’s narrative is conveyed as past, present and future acted out on Doonbeg beach in the west of Ireland. The left-hand panel is dominated by a powerful assemblage of flesh and bone whose forward motion is suddenly halted. The centre panel dominates.

Here the sitter engages directly with the viewer. Events, both joyful and traumatic are rendered symbolically. Her outstretched right hand supports a bird, a young crimson rosella, representative of her daughter; on her left hand, her son as a sapling oak. Beneath her left foot, a colonnade represents a legal triumph while shamrocks close to her heart are emblematic of the continuous support she has received from the people of Ireland and beyond. Within her torso, invisible cancer is made visible.

Her eyes are bright with strength and hope.  In the right-hand panel a horse is looking backwards, a collage of powerfully charged symbols is placed between its hind legs and forelegs. A flickering candle reminds the viewer of the fragility of life itself. Indented into the sands beneath, Vicky Phelan’s footsteps then leave the canvas.