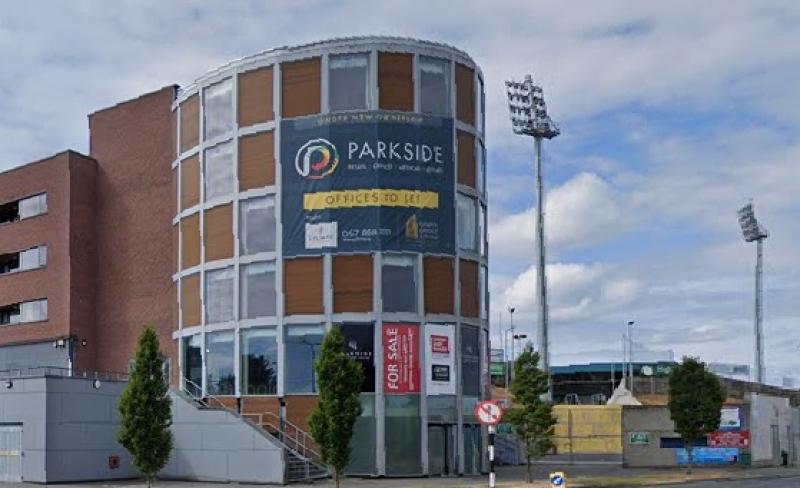 Laois County Council has given planning permission with conditions convert a proposed pub and offices in Celtic Tiger development beside Laois GAA county grounds into homes and offices.

The council has approved an application from Kildare based Nyquist Property Limited to alter the use of a section of the Parkside complex on the Abbeyleix Road. The section is the drum-shaped structure at the Abbeyleix Road, Fr Browne Avenue, Link Road junction.

The firm applied in March 2020 for a change of use of part of Block A from licensed premises that would have included a bar, lounge, restaurant and ancillary accommodation at ground level and plaza level. Nyquist wants to turn this section into offices and retail use.

The company also sought to alter the plaza and 1st, 2nd, 3rd and 4th floors from office use to residential. A total of ten apartments, including five two-bedroom and five three-bedroom units.

The firm had applied for alterations to the be made to the drum elevations to allow for external balconies, new windows to the east and west facing sides and associated site works.

Nyquist was given permission in March 2020 to convert seven retail units at Block B Plaza Level to 13 apartments.

The development was completed and properties put on the market as the property market began to crash resulting in much of the building being left unoccupied. Superquinn moved in and a small number of offices were rented.

Many of the apartment sales collapsed.

Nearly 100 of apartments in a connected block were subsequently sold and some offices and shops rented but other parts such as retail units, offices and the proposed pub and restaurant were never developed.

The partially let shopping centre and office block in Portlaoise went on the market with a guide price of €4.2 million in 2015 on the instruction of receivers acting for ACC Loan Management, formerly ACC Bank.