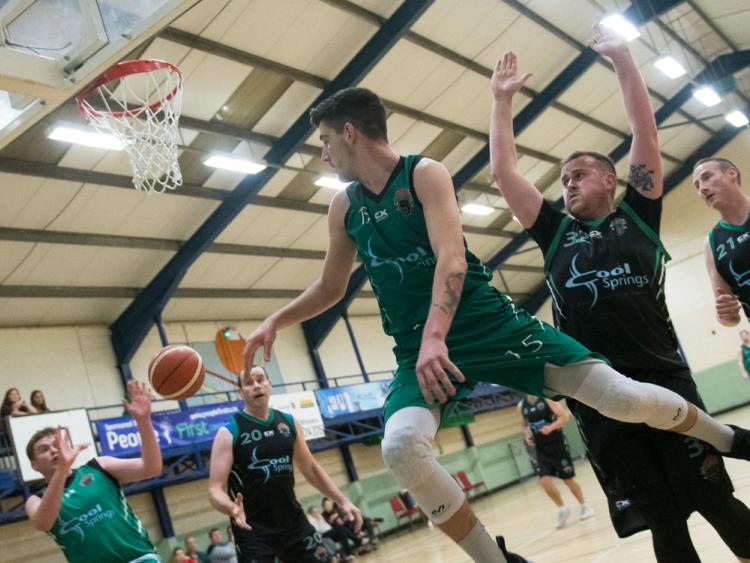 Kyle Burke makes this pass to Jack Scully for a chance at the basket in St Mary's Hall Picture: Denis Byrne.

Hoop dreams is a phrase that makes it to many basketball headlines but the past year has been a nightmare for clubs around the country, including in Laois with the devastating hit caused by Covid-19 leading to the 2020-21 season being laid to rest last week with hardly a basket scored since last March.

But the pragmatic Portlaoise Panthers do not intend to get bogged down trying to undo what can't be undone.
Instead, Chairman Shay Dooley is working with a team to build on solid community foundations to bring the club to the next level on and off the court.

But, reflecting on the cancelled season he said there is disappointment.

“The safety of our members was paramount. It was going to be a very exciting year for us but what can I say it just didn't happen. I am very disappointed.”He said just two senior games were played in August but virtually nothing otherwise with no outdoor play due to a lack of facilities. He said he completely understands why the games had to be abandoned. “The last thing we would have wanted was for somebody to get sick over a game of basketball,” he said.

He says players at all levels are disappointed.

The Panthers chairman acknowledges the difficulty players have on seeing the game played in other countries especially those who want to play for Ireland.

“Our international players are very disappointed because they are not getting their time to play. The European Championships were on this year and we would like to see our players back play for that,” he said.

Apart from the hit on the court the club has had to juggle with finances.

“We took a big hit this year. We had no fundraising and we have to fundraise to cover our costs for the year. We still have costs. We have to pay for registration, insurance. There are a lot of costs in running the club even though it didn't run. The administration costs a lot of money,” he said.

He does not believe the Panthers will find it and more different to recover then the big city clubs.

“We are all in the same boat. As soon as the restrictions are lifted we will be ready to go. There is a fantastic committee working to organise for next season,” he said.

He said members were also pragmatic about play in 2021.

“There was no way we were going to get a season played in two or three months,” he said.

While senior teams and players will be disappointed the chairman is very conscious of the loss of the underage activity.

“We have over 0ver 400 members and loads of kids. It is on the committee's mind about getting them back. If restrictions are lifted we are already looking at 3 on 3 tournaments during the summer to get them back on outdoor courts to get the kids back playing,” he said.

Apart from getting the sport back, the parallel big priority is finding a new home for the club. Plans are in place and a petition has online for people to support.

“We are like a dog with a bone. We are putting all our energy into that. We are getting great feedback from the community and it is badly needed,” he said.

The chairman backed a proposal from Laois TD Brian Stanley to build a venue on Tyrell's land on the Stradbally Road which is now owned by Laois County Council.

“I'll tell you why it would be ideal because the schools are there,” he said.

He believes it would put children at the heart of the club which would benefit the Panthers in many ways.

Mr Dooley does not expect Basketball Ireland to be in a position to give significant support but he does believe Portlaoise well back the vision.

He is realistic enough to accept the venue will be a challenge.

“Ideally we would like to get in for September but that is not going to happen but if it takes two years from today that will be great,” he said.

Mr Dooley says he has the proposal has for Tyrell's has been discussed with Laois County Council CEO John Mulholland.
“We are getting good feedback. He has bee very accomodating so far and we are confident,” he said.

He said the venue and basketball restarting in September is where all the club's energy are going at the moment.
“We'll be ready to go,” he says.