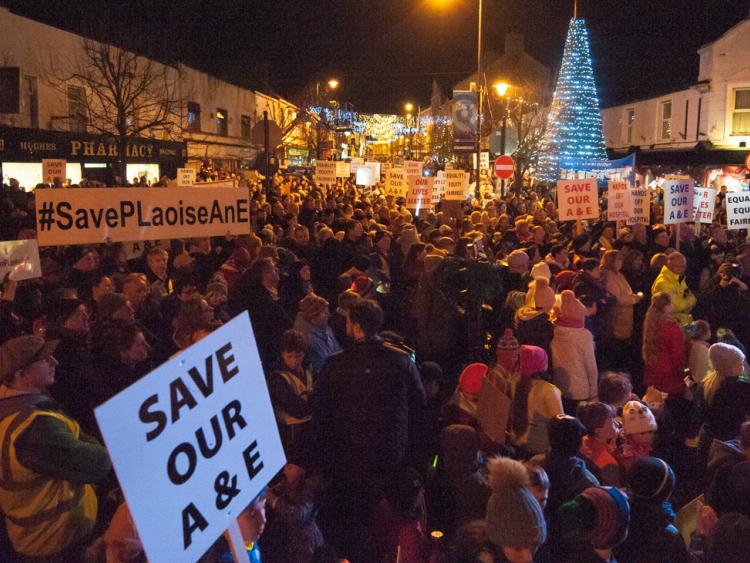 I was contacted in October 2017 by a reliable source to inform me a plan was in place for Portlaoise Hospital and it was important I see it.

This document was signed off on by HSE chief Dr Susan O Reilly and clearly set out that important services were been taken out of Portlaoise.

It stated: “We will develop a 24/7 General Practitioner referred medical assessment unit and a 12/7 local injuries unit in Portlaoise in line with national clinical care programmes model of care”. It elaborated “we will expand the emergency department capacity, principally in Tallaght and the MRH Tullamore”.

In the autumn of 2017 Laois citizens stood up and made it very clear to Government that any attempt to downgrade Portlaoise would carry a very heavy political price.

So with absolute clarity, this meant Portlaoise was to have merely a medical assessment unit and a 12/7 i.e. 8am-8pm local injury unit. No round the clock Emergency Department (ED) and none of the services and facilities dependent on this, such as the Intensive Care Unit (ICU). The expansion of ED capacity in Tullamore and Tallaght would cater for patients that Portlaoise previously treated.

I brought this to the attention of the hospital staff and the public. It’s fair to say what followed was one mighty campaign to retain services that heaped pressure on the Government. All those that helped to organise or attended meetings and the massive street protest deserve credit. You ensured that the brakes were put on the Department and HSE plan.

Imagine what would have happened during this pandemic had the ED, ICU beds, critical care beds and other core services been removed? How many more would have lost their lives?

The staff have given their all over the past year. They have saved countless lives and made huge efforts to save every life. They treated hundreds of very sick patients and helped them recover. In doing so they put themselves at risk of serious illness or worse.

Over the past three years Portlaoise has become busier. Funding to it has increased and additional accommodation has been constructed. All of this is very welcome. However, it doesn’t take away the desire of those in powerful positions to remove services like the Emergency Department and ICU beds from what they deem “small hospitals” like Portlaoise.

The argument for the retention of services is undeniable. However, three years on there is no plan to secure and develop them in Portlaoise. No blueprint has been put forward to replace the one revealed in 2017. This causes obvious problems, such as recruitment and retention of senior clinicians and specialist staff along with localised planning of services. There is also the risk of future attempts to remove core services.

Imagine what would have happened during this pandemic had the ED, ICU beds, critical care beds and other core services been removed?

Covid 19 has underlined the need to strengthen our health services and increase capacity to average EU levels. What is required for Portlaoise is certainty and a plan, not just to retain services, but to expand them to cater for the growing population of Laois and beyond. The ED must be retained at all costs and expanded.

Portlaoise and other hospitals are been considered for a Respiratory Assessment Unit (RAU), this would also mean the expansion of the existing E D and create badly needed space to cater for general emergency admissions.

Portlaoise ED is one of the busiest outside Dublin, with an average of 40,000 attending annually and this cannot be ignored. An investment such as this in the ED would also help guarantee its future, something that has not yet been forthcoming from Government.

In the autumn of 2017 Laois citizens stood up and made it very clear to Government that any attempt to downgrade Portlaoise would carry a very heavy political price.

As we emerge from Covid, we must renew our determination to secure the ED and other core services in our hospital.