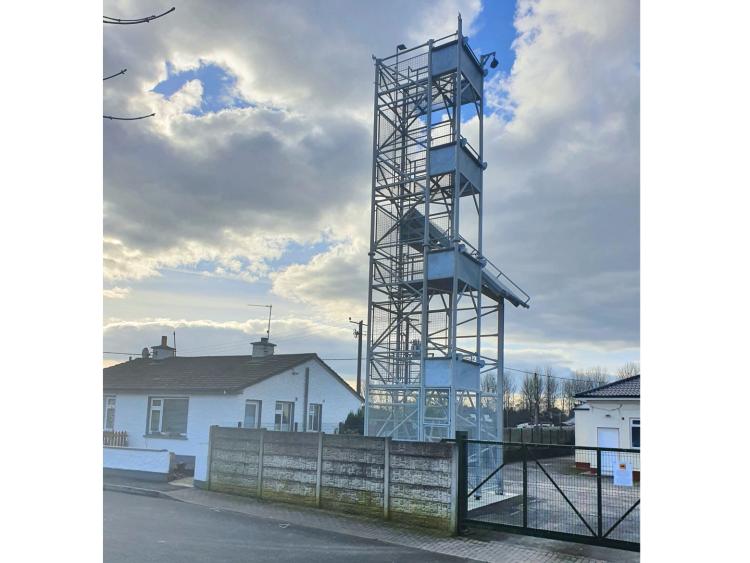 The new 30 metre fire training tower beside a house (on left) in Mountrath, Laois

A new tower erected in a fire station in Laois is raising alarm for neighbouring residents.

The 30 metre tall metal training tower is next to Fr O’Connor Crescent in Mountrath, and just nine feet from the front door of an elderly woman.

It was installed this year but a local councillor wants it moved immediately.

Cllr James Kelly says that while training of fire crews is supported, the tower is in the wrong place.

“The general consensus was that the drill tower would be located in the back right hand corner of the site but to the shock of a lot of residents from the area it has been installed where it is an eyesore and is only 9 feet away from the front door of an elderly resident.

“While all agree that planning permission was approved, there was no consultation with local representatives or residents on the actual location of the drill tower,” he said.

Patsy Sydes is one of the residents in the 52 year old estate, and a friend to the elderly lady living next to the structure.

“She doesn’t like it, coming to her front door and seeing this big monstrosity. She is over 80 years of age, she will be worried about whether the noise is intruders. There’ll be people running up and down this when they start their training on Thursday nights.

“We have a lovely peaceful well kept little estate. This tower is like something you’d see at Portlaoise prison. I don’t think it’s fair to people here, and especially to the two people in the maisonettes beside it.

“They could have gone down the far side of the station, away from the front of houses,” Mr Sydes said.

Another resident who spoke to the Leinster Express agrees.

“It’s an eyesore. With that wind you’d be worried if it falls on top of the maisonettes. I get that they have to practice, I’m a healthcare worker myself, but they could have moved it over the far side. We didn’t know anything about this,” she said.

Cllr Kelly  raised the problem at the February meeting of Laois County Council.

“I’d welcomed this and we all agree that this is a vital service, and the upgrade is of huge benefit to the fire service training programme.

“This has been built in a residential area, it’s not nice for the two people in the maisonettes, this 30 metre tower is nine foot from the front door of one resident.

“We assumed it would be on the other part of the site. People are comparing it to Crossmaglen. We need the tower but we need to get this moved,” he said.

“I met the lady in the maisonette, she said it’s like living beside a mountain, she said it would make a great clothesline. Was it not necessary to talk to the people living there?” he said.

“To see that out her front door is horrible, we have to go back and look at it again,” he said.

Cllr Willie Aird said it must be moved.

“Why didn’t the people go and talk to her first? Anybody can see it’s wrong,” he said.

“I acknowledge the concern and I will look at it. There was a part 8 consultation in late 2018 and a subsequent approval by members in January 2019, to note that. I will have a look but there are underground services to it. Relocating may not be as simple as it might appear,” he said.

Capital funding was approved for the four storey Drill Tower along with a 4 x 4 garage at Mountrath Fire Station in 2019. was given the go ahead with planning permission approved. The work cost €130,000, paid by the National Directorate Fire and Emergency Management.

Mountmellick fire station is getting a similar tower as part of a €150,000 upgrade.