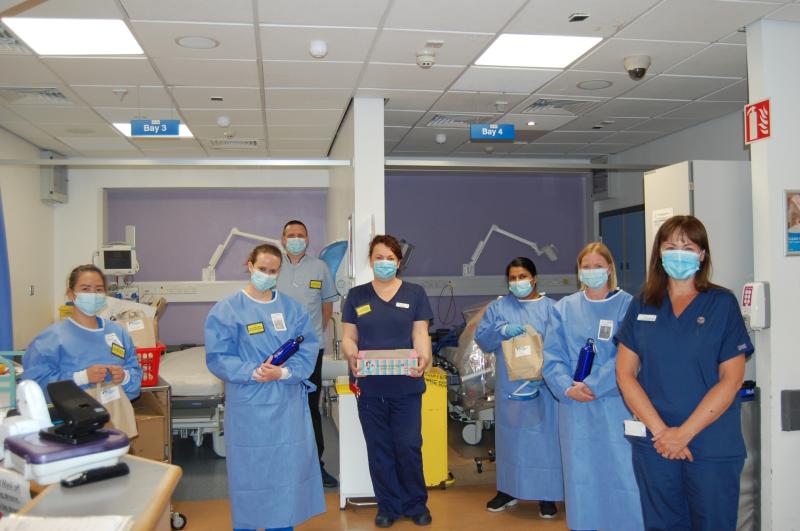 Portlaoise hospital staff on duty during the pandemic in 2020

Covid-19 staff at Portlaoise hospital had a relatively small number of patients with Covid-19 at the end of February but more than half of those in hospital were critically ill and people are still being admitted to the Laois hospital with the virus.

Staff at the Midland Regional Hospital Portlaoise were treating five patients who were sick with the disease on Sunday, February 28 according to the latest figures from the HSE.

The HSE’s Covid-19 Daily Operations Update also shows that there were three critically ill patients at the Laois hospital on February 28. The number of very sick Covid-19 patients peaked at 12 in early February.

There were six general beds and two available ICU bed at the hospital by 8 pm on Sunday night.

The report shows that there were 17 confirmed cases at the Midland Regional Hospital Tullamore. The Offaly hospital had no suspect cases. Staff were treating five critically ill Covid-19 patients going into Monday.

There were just seven general and no ICU beds available at the Offaly hospital.

Naas General Hospital had 10 people who were sick with the virus at the end of the weekend. There were three suspected cases while nobody was critically ill patients in the ICU.

The Kildare hospital had 26 general care beds and one ICU bed available.

There were 29 confirmed and seven suspected cases at Tallaght on Sunday night. The Dublin hospital had 8  general beds but no ICU beds available. There were nine critically ill Covid patients in ICU.

St James's continues to be the busiest hospital. It had 67 confirmed and 62 suspected cases by 8 pm February 28. It had 22 general beds and one ICU beds available going into Monday. There were 20 confirmed and one suspected Covid cases in its ICU which is similar to recent weeks.

Nationally, there were 537 people in hospitals by 8 pm on Sunday night February 28. This contrasts with 928 in hospitals two weeks earlier. There were 136 suspected in hospitals with 19 people were admitted with the virus in the previous 24 hours.

There were 138 critically ill people in hospitals on Sunday. Of these, six were suspected cases. Of the total, 96 were ventilated (94 confirmed, 2 suspected).

Covid-19 was a factor in three ICU deaths on February 28.

NPHET figures published on March 1 show that as of 8am Monday, 540 COVID-19 patients are hospitalised, of which 120 are in ICU. There 14 additional hospitalisations in the past 24 hours.

Dr Ronan Glynn, Deputy Chief Medical Officer, the Department of Health said in the NPHET statement that progress is being made.

“While the number of daily cases and the number of people in hospital and critical care remain high, we continue to make progress. In the last 24 hours, we have had no new admissions to critical care, the first time this has happened since St. Stephen’s Day. This is one more tangible signal of the efforts that people continue to make and how those efforts are impacting positively on the trajectory of COVID-19 in Ireland. Please stick with this over the coming weeks,” he said.