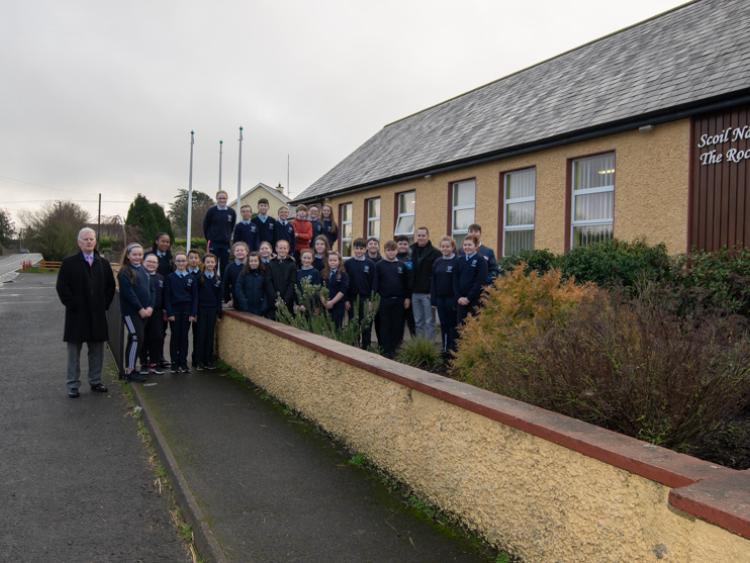 Money to pay for a path to a school near Mountmellick would be found if it was in the Portlaoise area, is the charge levelled by a county councillor.

Cllr Paddy Bracken made the point after being told that funds to install a footpath to The Rock National School has not been confirmed.

The councillor has been working with the school on the long-running campaign to install the pavement due to safety concerns faced by children.

Petition underway by The Rock community for footpath

The confirmation that the identification of a funding source to extend a footpath to The Rock National School was still being explored infuriated Cllr Bracken at a recent meeting with council officials.

It comes just over two years since sixth class pupils at the school wrote to councillors and county hall management demanding that a path be installed linking the school to the town and the GAA pitch which the children use.

Cllr Bracken tabled a motion calling on the Laois County Council to give an update on the status of a footpath extension from Debbicott to The Rock school.

“The Senior Engineer in Roads will meet the Councillor in question to discuss funding for this project in the light of funding applied for and in light of funding received and potential funding options,” he said.

Cllr Bracken was not satisfied with this.

“I’m not a bit happy with that. This is on the agenda for quite some time,” he said.

The Fianna Fáil councillor said quotations were obtained previously adding that they came in at about €200,000.

Cllr Bracken said many types of funding announcements are made for walkways to school but not ‘one shilling’ has been obtained for the path to The Rock school.

Cllr Seamus McDonald endorsed his colleague's comments. He said the children had got involved in the campaign.

“We all got letters from children attending that school two years ago. There were hundreds of signatures. It is a serious issue because it is dangerous,” he said.

Donal Brennan, Director of Services, noted the sentiments expressed. He said funding could be sourced from the 2021 roads programme or new Department of Transport initiatives.

“There is a promise of additional funding in the pipeline for walking and cycle routes. There may be an opportunity under that,” he said.

Mr Brennan said that the senior engineer in the council’s roads section would discuss the new opportunities with the councillors.

Local residents have started an online petition to ask for the footpath. See it here.