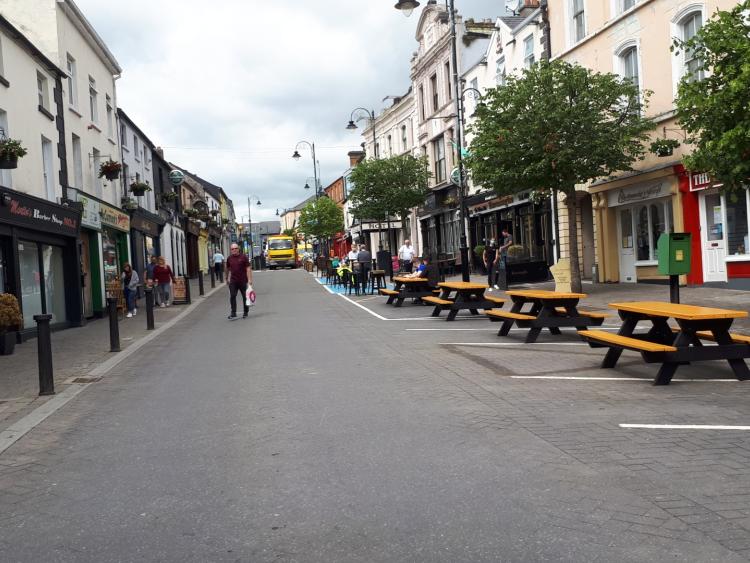 Funding of €9 million is set to be spent on projects to make Portlaoise Ireland’s first designated “Low Carbon Town”.

Laois County Council is getting the funds to build on the work already carried out to date.

The money will fund the pedestrianisation on lower Main Street, upgrade of the public area along Main Street and Market Square and complete of the improvement works at the Cultural Quarter in the Town Centre.

It will also be spent on major enhancement measures of the streetscape of James Fintan Lalor Avenue and the prioritisation of pedestrian access, cycling and public transport. The creation of 'urban development sites' in this area will be carried out.

The project also envisages spending on bus services and cycle lanes in the town to reduce the number of car journeys.

Sean Fleming, Minister of State at the Department of Finance welcomed the allocation.

"This funding is in addition to funding already announced for these areas in the town, bringing the total to €18.06 million to deliver on the designation of Portlaoise as the first Low Carbon Town in Ireland.

"These major improvements will enhance the quality of life for many people. They are all about making Portlaoise a more attractive place in which to live, work, visit, invest and create employment.

"They will be a catalyst for regeneration, development and growth. This funding will provide a much needed economic boost and stimulus for job creation for Portlaoise," he said.

Deputy Charlie Flanagan said the 'transformative investment' of over €11.25m for Laois and Offaly under the second round of the Urban Regeneration and Development Fund.

“This second round of the Urban Regeneration and Development Fund (URDF) will see €9m invested in the Portlaoise Low Carbon Town Centre Project and €2.25m for the Tullamore Urban Regeneration and Development Project in Offaly. I was very pleased when at the Cabinet table to have early approval given to Portlaoise having regard to the particular challenges of its rapid growth.

“Based on applications from local authorities, the URDF will see substantial investment in infrastructure, improving transport and connectivity, quality and location of housing, recreational and cultural facilities, among other areas," he said.

"I warmly welcome the funding for Portlaoise. This is a total of €18.6 million, it had been €9.6 million now another €9 is added. This gives money for the carpark beside the train station and beautiful public gardens at the convent, and Fitzmaurice Place, as well as giving infrastructure for cycling and public transport and hopefully more bus services. It will make Portlaoise a better place to live, to work and to invest in. It is huge news for Portlaoise, absolutely brilliant. I thank Laois County Council CEO John Mulholland and the Director of Services Simon Walton who put a lot of work into this application," she said.

Laois/Offaly-based  Senator and Minister for State Pippa Hackett also welcomed the news which will see €2.25 million going to Tullamore.

“This is excellent news for the four Midlands towns receiving funding. It’s really exciting to see Portlaoise designated Ireland’s first low-carbon town with more EV charge points, more cycle lanes, and a better public realm. It leads the way for how our towns will function in the years to come and I’m looking forward to seeing the completion of the Cultural Quarter there.

“The regeneration of Tullamore is also underway and today’s announcement of additional funding will complement the works already done, such as the remote working hub, the urban garden and the civic space at the Community Arts Centre. It’s all part of the strategic vision for Tullamore,” said the Green Party representative.

A statement said the projects are being funded under ‘Call 2’ of the Urban Regeneration and Development Fund (URDF). The URDF part-funds projects aimed at enhancing urban areas to make them more attractive places in which to live, work, visit and invest. It said the four local authorities, which will deliver these multi-annual projects, will receive this funding.

The projects for which URDF support have been approved are:

The department will now contact the local authorities on the next steps regarding funding. The projects announced today will augment the existing pipeline of 87 URDF-supported projects across the country for which just under €300 million has been allocated. Details of the provisional funding allocations for URDF projects in other Project Ireland 2040 investment regions not already announced will be announced in the coming weeks.

All selected projects support the National Planning Framework’s ‘national strategic outcome’ of compact growth, a particular focus of the second call for URDF proposals. The URDF aims to facilitate a greater proportion of residential and commercial development, supported by infrastructure, services and amenities, within the existing built-up areas of larger urban settlements.