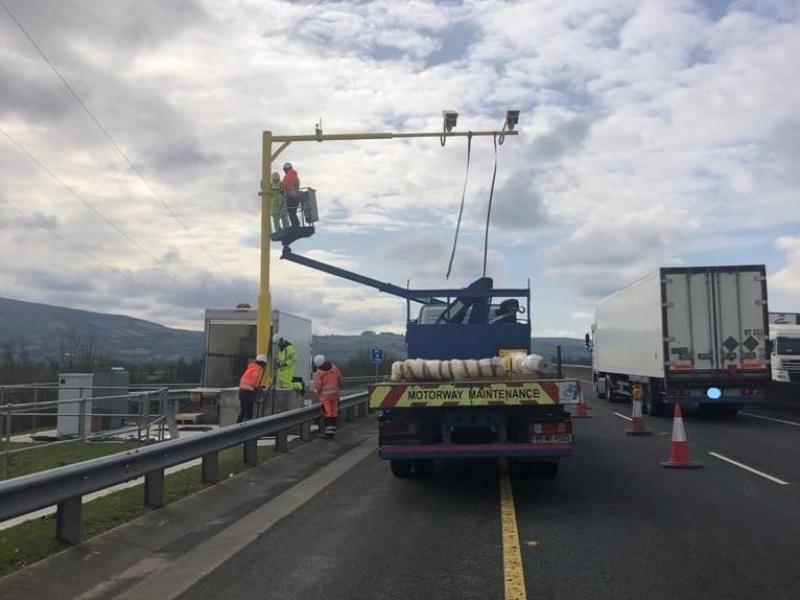 Work to install the new cameras began on Monday

A new speed safety camera system is to be trialled on the M7 motorway which runs through Laois because nearly 40% of motorists are breaking the limit while many don't slow down in bad weather, according to Gardaí

As part of a pilot project in Limerick, Transport Infrastructure Ireland, the Roads Safety Authority and An Garda Síochána have confirmed the installation of motorway average speed safety cameras.

Gardaí say that analysis of traffic data by TII shows that speeding is typical of driver behaviour on low traffic volume sections of the motorway network throughout the country. They say this type of driver behaviour is very dangerous, and it is compounded during rain or hail showers increasing the potential of serious accidents.

Gardaí say an analysis of speed data on the M7 corridor since 2017 identified speeding as a significant issue with approx. 40 % of drivers exceeding the 120 km/h speed limit on certain sections.

The Gardaí add that the data identified that speeds are not being appropriately moderated in response to adverse weather conditions such as heavy rain or low road temperatures.

The data also suggests that speeds are not being appropriately moderated in response to adverse weather conditions such as heavy rain or low road temperatures.

It has been announced that the camera system will be deployed between Junction 26 (Nenagh West) and Junction 27 (Birdhill) covering both directions.

When operational, the system will be Ireland’s first mainline motorway based system.

An identical system has been operational within the Dublin Tunnel since mid-2017 and it has been hugely successful in improving driver behaviour as regards speeding with the number of drivers exceeding the speed limit dropping from about 55% to just over 10%.

"The specific locations chosen for the pilot scheme have been subject to frequent weather-related/micro-climate events (mostly hail) resulting in increased collision frequency in the area.

The installation of equipment at the M7 sites commenced on Monday and will be followed by a period of testing and commissioning. At the M7 locations, motorists will soon see the roadside equipment being deployed for the camera system. This will include the yellow poles and cameras traditionally associated with speed measurement equipment.

The ‘go-live’ date for operations will be determined by An Garda Síochána and there will be at least ten days notice and a communications campaign in advance.

Commenting on the pilot scheme, Superintendent Tom Murphy said: "This system will save lives and make our roads safer. An Garda Síochána are delighted to work with TII and RSA to implement this project. The success of this initiative will see a change in driver behaviour as the current speeds on the M7 are totally unacceptable. 24/7 monitoring of speed will soon be in place. The success of the project from the viewpoint of An Garda Síochána will be greater compliance and the message is simple Speed kills so Slowdown".

In 2020, there were a total of 357 speeding detections made in the vicinity of Junction 26 and Junction 27 by Go Safe and An Garda Siochana.

Kevin O’Rourke, TII's Head of Network Operation's said: "The success of the Average Speed Safety Camera system in Dublin Tunnel is demonstrated by the reduction in speeding incidents by about 80%. This highlights the potential significant safety benefits for both the road user and our teams working on the motorways from using such systems on the wider motorway network and is in line with international experience.”

Michael Rowland, Director of Road Safety, Driver Education & Research at the Road Safety Authority added: "Safety cameras have been in operation in Ireland since November 2010 and are proven life savers. They are about saving lives and preventing injuries. Where safety cameras have been deployed, deaths and serious injuries as a result of speeding have reduced. Everyone has a choice; we can slow down and save a life, or we can speed, risk your own life and the lives of others, in addition to risking penalty points and a fine.”

Actions are undertaken along the M7 (J21 to J28) in response to incident data:

• Data analysis (traffic, weather etc.) to identify collision circumstances and driver behaviour trends;
• "Wet skid” collision clusters have been identified by An Garda Síochána and TII and have been mitigated with engineering interventions;
• Collaboration amongst all road safety stakeholders to inform motorists of the hazards associated with adverse weather;
o Road Safety Authority adverts regarding hail;
o Met Éireann forecasts including a focus on hail as required;
o TII introduced VMS on M7 at locations most susceptible to hail to warn drivers.