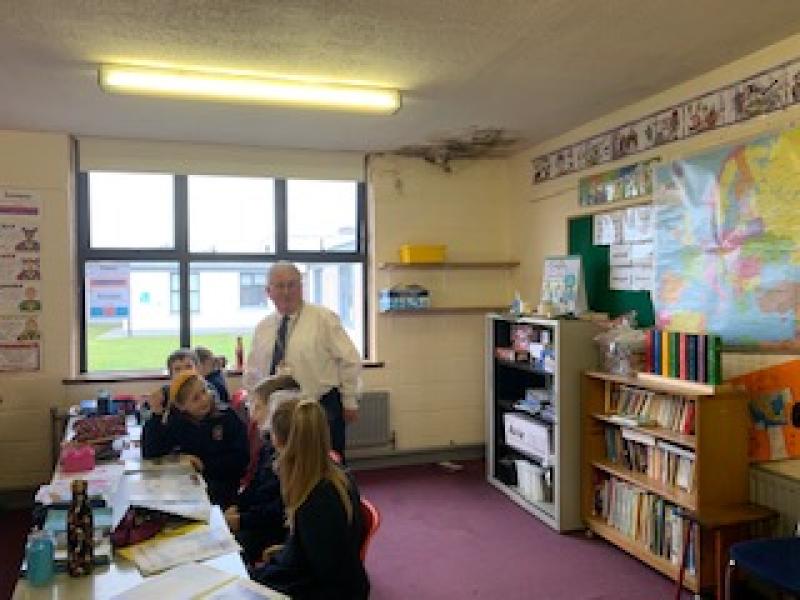 Scoil Mhuire Abbeyleix principal Aidan McEvoy with pupils in one of the classrooms which had to be decommissioned for months due to a hole in the roof. Temporary repairs have since been carried out.

Scoil Mhuire in Abbeyleix is literally patched together according to the principal of the building which is now ten years past its intended lifespan.

Mr Aidan McEvoy led the delegation of staff, parents, pupils and management representatives who were grateful for the opportunity to outline the conditions faced in the building which was built in 1983 to Minister for Education Norma Foley.

Speaking with the Leinster Express afterwards Mr McEvoy said the delegation outlined the challenges faced to the Minister in a presentation that focused on five different points in the school which has 316 on the roll book. He said they went into the meeting with the support of the 202 families who have children in the school, including 124 letters of support from families.

The five key areas focused on were the roof, sewerage, insulation, electrics, and dampness.

“I made the point that they are all interrelated. There has to be a whole-school approach to this. You can't sort out the damp unless you fix the roof; you can’t sort out the sewerage unless you resolve the damp.

Picture taken in 2019 of one of the classrooms where the roof had been leaking. 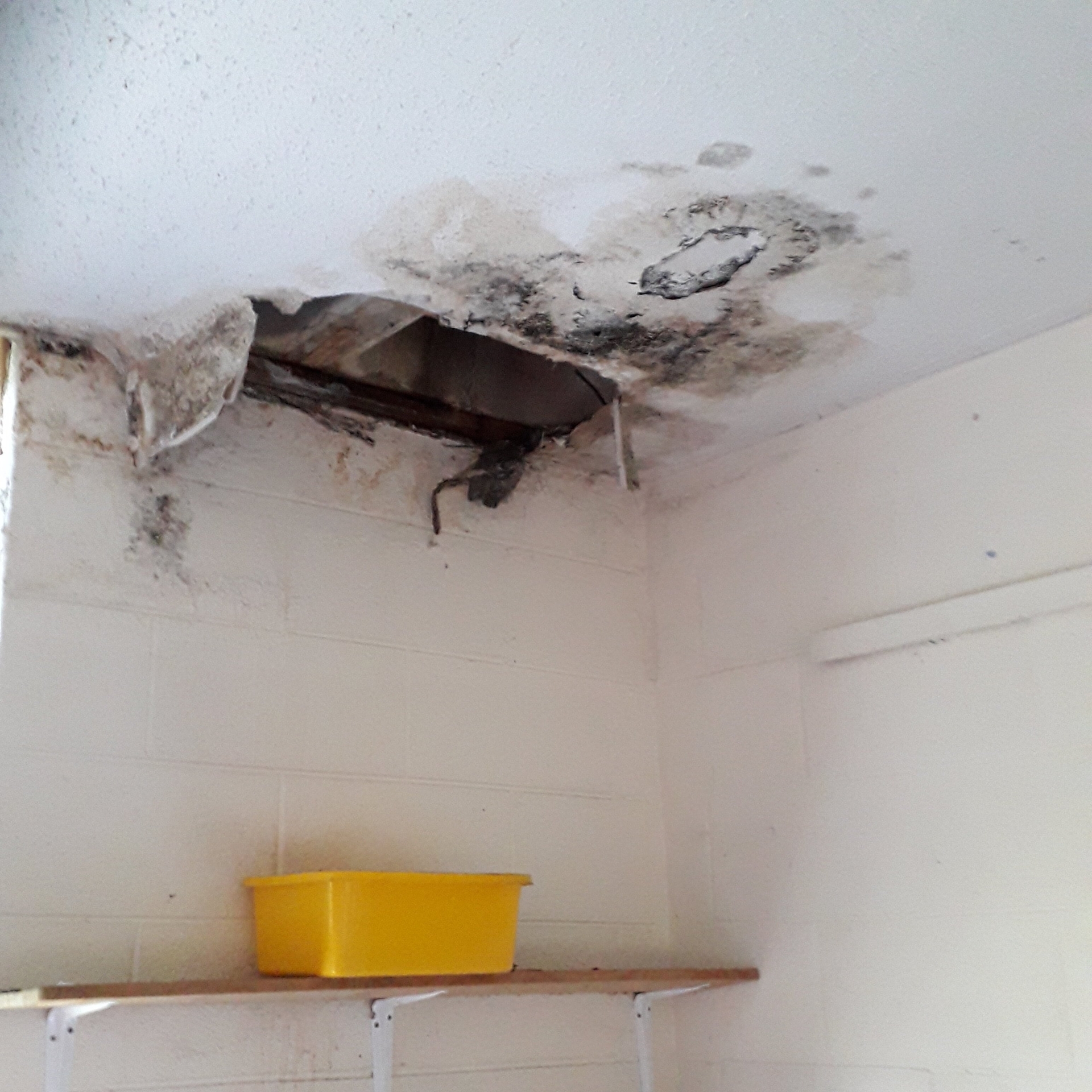 “We told her that we have been proactive. We have acquired 2.5 acres of school grounds that are available. I said it is not as if we are coming with the begging hand and have not done anything about it. We have a site ready to go on the existing site so there would not be a hold up.

“We made the point strongly that we have a state of the art ASD unit and a hall built by the parents on voluntary contributions without any cost to the State. So all we are looking for is mainstream classrooms and ancillary rooms,” he said.

The school was built in 1983 with a three-decade lifespan. The problem the community now faces is that areas with strong population growth are prioritised for new building. Mr McEvoy said the situation at Scoil Mhuire requires an exception to be made.

“We made the case that Abbeyleix is a secondary town and is not going to have a huge demographic change. If we were going on the basis of building a school-based on demographic growth we are going to fail but we have extraordinary circumstances.

“I made the point that our school was the rapid school build in 1983. It had a defined lifespan of 30 years so we are well gone past that,” he said.

Picture taken of leaking pipes in the building. 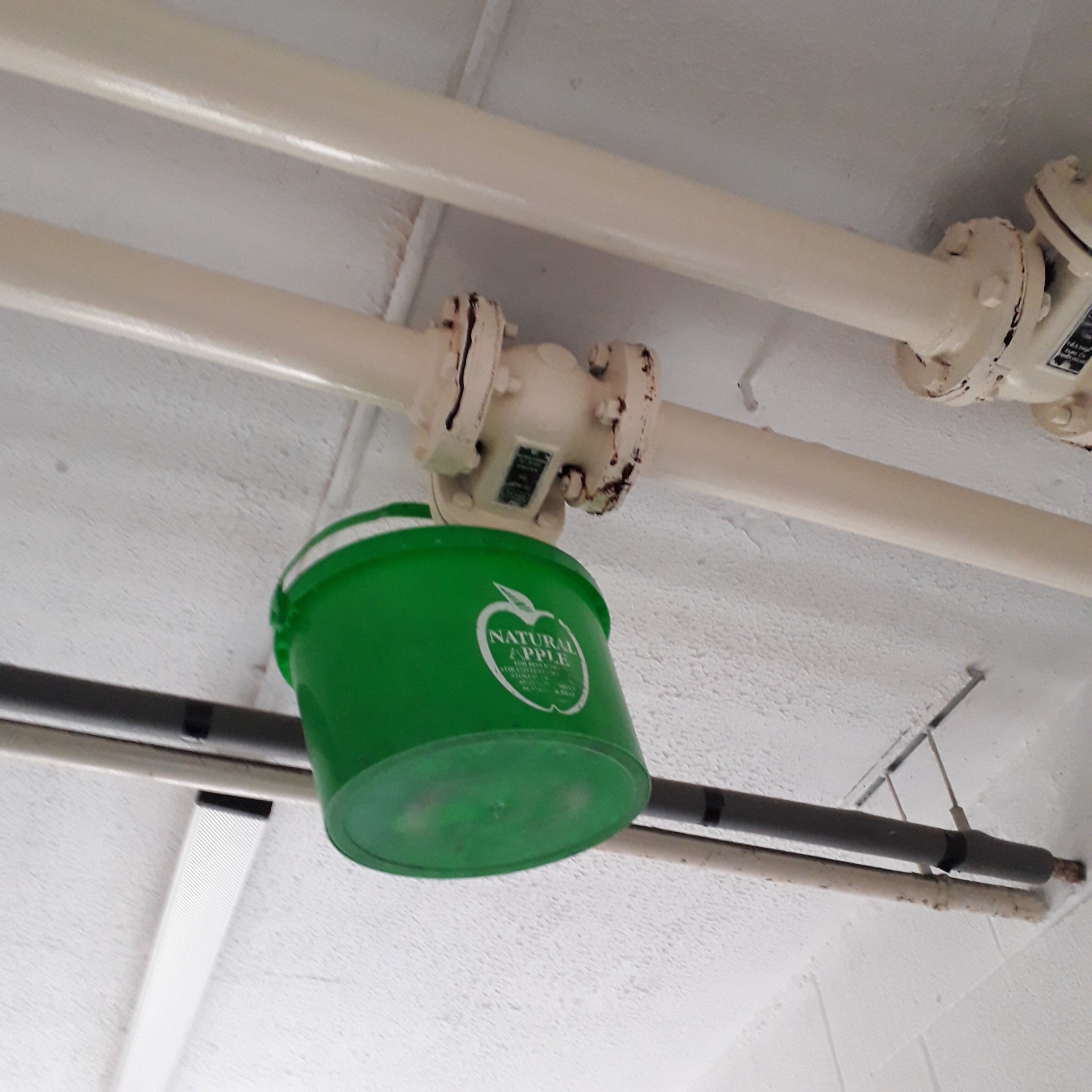 The principal outlined what has been done to keep the school open and the problems caused.

“We are very grateful for the emergency works but that was only a patchwork job in the interest of saving money. We first notified the Department of Education of the problems in October 2018,” he said.

"The children were distributed around the school. We used the general-purpose area, part of the hall, some of the resource rooms. It wasn’t ideal by any manner of means.

“We secured emergency funding to patch the roof of the senior building which allowed us to stop the water coming in for now. That only has a life span of two to three years. We were told that. We still have water coming in other parts of the school.

“In excess of €85,000 was spent on the patch job. It is money gone but allowed us to reopen last August. The job was so basic that we could not replace the ceilings inside. We had to cut parts out of the ceilings to make them presentable.

“While we have it back in use now it is only a matter of time before it will be gone again. What we are concerned about is the middle block because the water is starting to come in there.

“Part of the money was used to repair the ceiling in the staff toilet but that is leaking again now. The man who did the work told us that there is no point in doing patches because water could come from 10 metres away and find its way in. So we do either all the roof or we are wasting our time.

“It is literally patched together. We have been constantly trying to make the classrooms and school presentable and as comfortable as possible but by doing that we are only masking the serious problems.

“We are constantly painting the schools internally. It is not for decoration. We are painting to cut down the smell, to kill the damp, to mask what is there. We get a minor works grant every year but that minor works grant goes on basic repairs. We are putting money on top of this to make it presentable.

“We can't do it anymore. Some of the ceilings did collapse after we had vacated. Whatever the long term solution is going to be we are going to need support in the meantime to make it habitable and presentable. We can't let it deteriorate again.

“It is going to be constant work but we made the point that the more money we spend on temporary patch jobs the greater the waste of money that is. This cannot go on for another five years. We don’t want to lose enrolments it is a good school,” he said.

Picture of hole in classroom ceiling that has been temporarily patched up. 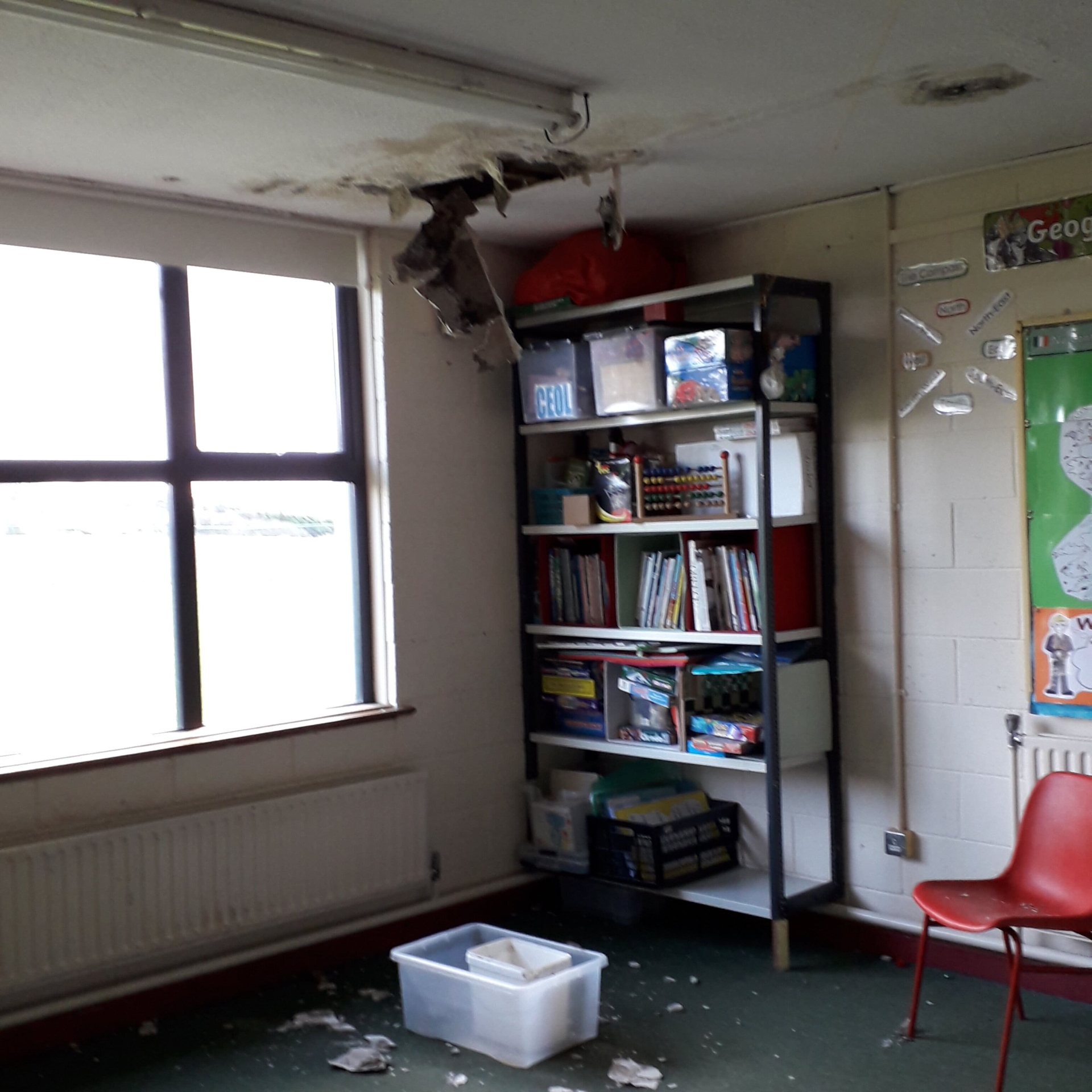 Scoil Mhuire's principal praised the Minister for meeting and acknowledging the problems and committing to act.

“The Minister gave generously of her time and listened to everybody. We were realistic to know that she could not give us a commitment on the day but we feel that something is going to be done and this will not be left hanging,” said Mr  McEvoy.

“She was going back to the Department who are going to carry out an audit of the building. She said there were two options, the retrofit of the existing building or a new build. She said everything is on the table.

“She said that the Department would be in contact with the board of management regarding the audit in the next number of weeks.

“The only timeframe that she committed to was that we would be contacted by her officials in the next couple of weeks regarding the audit. But she said she appreciated the urgency of the case.

“Overall we were very pleased with the meeting and thought it was very constructive,” he said.

She was very receptive and gave generously of her time. She said she had got representations from all sides and was aware.

Damp is a big problem as picture shows. 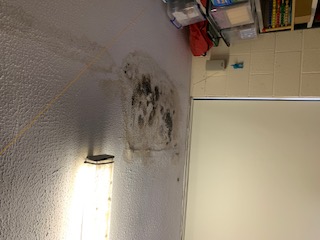 Mr McEvoy also paid tribute to the Laois and Offaly politicians from across the political divide have put aside their differences in the campaign to overhaul conditions.

Mr McEvoy thanked all of them for the work they have done and continue to do.

“In fairness, they all put their political allegiances aside and they all supported what we were saying. They all have been to the school and have seen it first hand. Every one of them spoke in support of our proposal and situation individually from the experience of having been to the school.

“They made a plea with her to take action. They had all done a lot of background work as they promised they would do,” said Mr McEvoy.

Speaking afterwards, Minister Fleming outlined what made the biggest impact during the meeting.

“The Minister was very taken by the voice of the children. The children said they were freezing, had to wear their coats, are afraid the ceiling is going to fall, and are afraid to go to the toilet because of the smell,” he said.

Minister Fleming said Minister Foley, who was accompanied by two officials, outlined her next steps.

“The Minister has given a guarantee that the Department will contact the school in the coming weeks to arrange a full audit of the building. There are two options: a complete retrofit or a new building,” he said.

He said a decision on what to do next would be based on the assessment. Minister Fleming said he was absolutely satisfied with what was put on the table by the Minister.

“It is real progress, she has put two options on the table. She used the phrase: 'I can't contradict anything that has been said.

She has got the seriousness of it so it is a positive good sign,” said the Fianna Fáil TD.

Sinn Féin TD Brian Stanley said the Laois school left her in no doubt about their needs.

“A rock solid case was made for a new school in Abbeyleix. The Minister was left in no doubt of the terrible condition that Scoil Mhuire is in.

“The school staff, pupils and school management outlined in great detail the terrible condition of the building,” he said.

Minister Hackett said she will be keeping the matter on her agenda pledged to follow up with Minister Foley.

“This is a health, safety, environmental and humanity issue. The teachers and board members put forward an impressive case to have a green school to match their green ethos.

"They want to promote active travel with safe walking and bicycle access for students and teachers. The least the deserve is a proper school building,” she said. 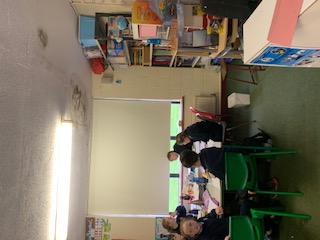