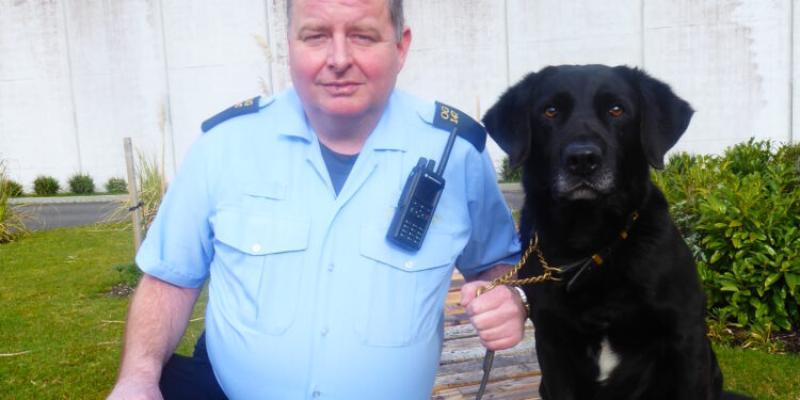 Saxon, a Passive Drug Detection Dog, has been retired from duty in the Irish Prison Service (IPS) after more than a decade of service at jails in Portlaoise and other parts of Ireland.

"The Irish Prison Service would like acknowledge the service of Saxon, a Passive Drug Detection Dog, after serving an incredible 11 years of loyal service and wishes him all the best in his retirement," said a recent statement.

The IPS said Saxon completed training with his handler Sean Dunne in December 2009 in the Northern Ireland Prison College. A young eager dog and possessed plenty of search drive, that on the day of passing out, Saxon was deployed “Off The Lead” for a demonstration in P.D.D search procedures on the day.

Following certification, Sean and Saxon were deployed to Wheatfield Kennels where they carried out visitor screening duties in the Dublin Prisons. In June 2010, they transferred to the Midlands & Portlaoise Prisons and from, January 2016, they provided service to Limerick Prison before returning to the Midlands & Portlaoise Prisons in September 2018.

The IPS said Saxon was very popular among staff he worked with especially in the Security Screening Unit (SSU) areas.

"He would wait patiently but eagerly at the turn styles for people to be called through so he could start his daily duties, most of the time hoping for an odd snack to be passed to him when Sean wasn’t looking and he would give his paw in acknowledgement of same.

"He was eager, boisterous but gentle when working. Sean and the Operational Support Group are very proud of the incredible 11 successful and effective years Saxon has given to the Irish Prison Service," said the statement.

The Governor of the Operational Support Group, Lorraine McCarthy praised the animal for its work.

“Saxon is a very diligent dog who served the Irish Prison Service with distinction over the years. He was always friendly in his interactions with staff and the public, which made him a well respected and popular figure among his colleagues. “He will certainly be missed by all,” she said.

Saxon will spend his retirement in the home of his handler Sean.