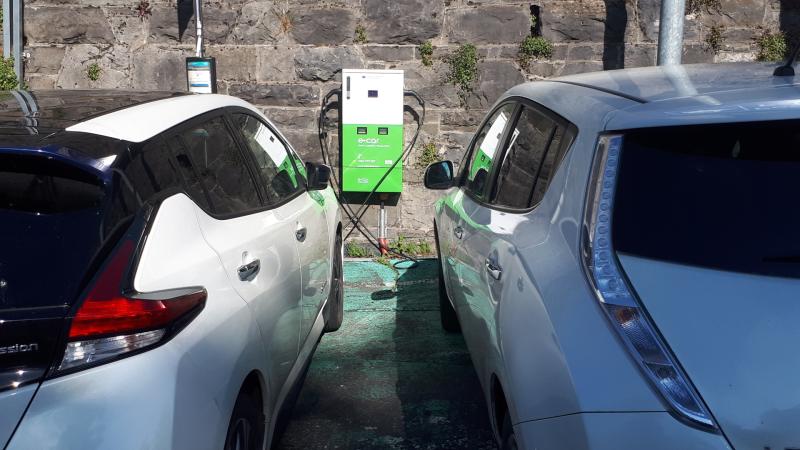 It is 'ridiculous' the only electric car charging point in Laois provided by Laois County Council is located in Portlaoise, according to a councillor.

Cllr Ben Brennan called on Laois County Council to install charging points at Graiguecullen, Kelleshin and Ballylinan. He was supported by other councillors including Cllr Aidan Mullins. He claimed that the council has its ‘head buried in the sand’ over the slow rate of investment in charging points around Laois.

Cllr Brennan and colleagues were dismayed by a reply from the council’s road section at the Portarlington Graiguecullen Municipal District meeting.

“A tender was issued in July 2020 to facilitate the delivery of electric vehicle charging points. A pilot EV charging point has been installed at the car park beside County Hall. It is available for use by full electric and hybrid vehicle owners.

“The performance of this unit will be monitored over the coming 12 months to establish usage patterns. This data will inform future roll-out plans for EV charging points around the county,” said the written reply from Mr Aidrian Barrett, Senior Engineer.

Cllr Brennan was exasperated by the response.

“Oh my God. So if I buy a car I have to drive to Portlaoise to get it charged. To me, that is the most ridiculous answer I’ve ever heard in all of my life. They are expecting people to change over and there is nowhere to plug in the car.

“If I wanted to charge my car on this side of Laois (south-east) I’d have to go across the border to Carlow,” he said.

He said there should be charging points in all Laois towns. He said he had tabled a similar motion more than two years ago.

“We seem to be going nowhere. I cannot understand why we have just one charging point in Portlaoise. Our area is completely forgotten. We need support it is all going to Portlaoise,” he said.

He said it is unfair to expect people in his area to drive to Portlaoise to charge.

He called for more movement in the context of climate change.

Cllr Moran agreed that if people are being encouraged to go electric the infrastructure must be there.

“The first thing you are going to do if you are thinking about buying a car is look at the infrastructure. If it is not there you are not going to buy,” she said.

She also claimed that “everything goes to Portlaoise”.

Acknowledging that Portlaoise is a designated low-carbon town, Cllr Padraig Fleming also disagreed with the council's approach. He warned his colleagues not to expect anything different soon.

“It is a very long slow road and it will be another few years before we get something into our area,” he said.

He wanted to know a timescale for the charging point roll out around Laois.

Cllr Aidan Mullins agreed with Cllr Brennan’s motion and said the council needs to plan for the long term.

“I think we have our heads buried in the sand. It is a very shortsighted approach to these charging points. We know hybrids are being phased out and we need to be prepared for that. The response that we are going to monitor performance means nothing. He said the number in the next 12 months will not give a true picture of what is coming,” he said.

He said the policy needs review. “I don’t think this is acceptable. We should be investing,” she said.

There are a small number of electric car charging points around Laois but they are mainly run by the ESB. Most are in Portlaoise.