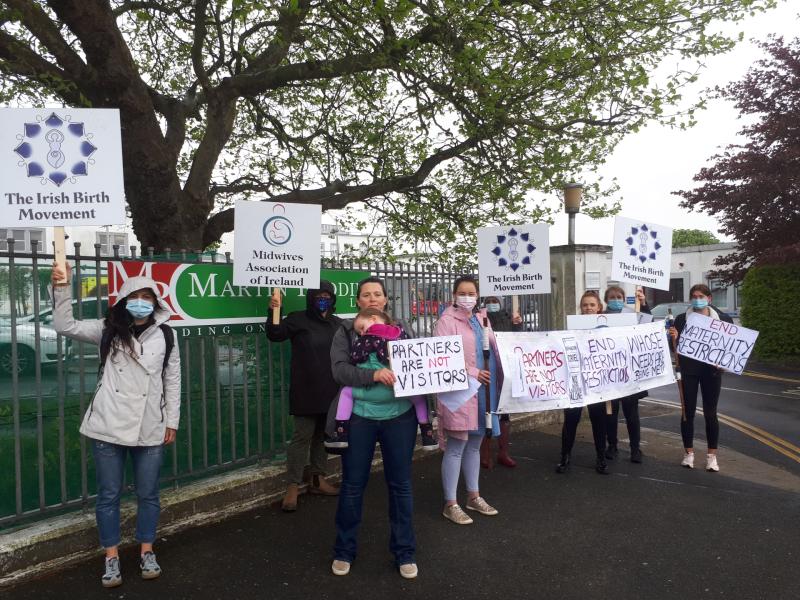 Women have mounted a protest at Portlaoise hospital in an effort to force the removal of restrictions on parents expecting to have a child at the maternity unit.

The protest is part of a national series of demonstrations at the gates of hospitals around Ireland where they say measures to reduce the risk of Covid-19 restrictions have not been relaxed.

The protestors, who come from an alliance of different groups, believe the measures are no longer needed and could be eased for parents to ensure both parents can attend during scans and throughout labour.

Brenda O'Toole, a community midwife, is a coordinator of the campaign which includes the Irish Birth Movement, the Association for Improvements in Maternity Services (AIMS) Ireland the Irish Midwives Association. She was at Portlaoise hospital on Wednesday, May 12 with other women.

She says restrictions include the exclusion of partners from attending pregnancy appointments and the early stages of labour. At present, Ms O'Toole said partners are also not allowed to attend until the mother has been deemed to be in labour if she has had to be induced. She said partners may not be present to learn scan results and are prevented from attending a special care unit.

"It causes unnecessary trauma and anxiety for mothers...We are here to ask the hospital to lift the maternity restrictions. Partners are not visitors. Partners play a huge role in the birthing process.

"There are a lot of restrictions and the public are not aware of them. Everyone is sold on the idea that all the hospitals are opening up but they are not," she said.

Ms O'Toole said by maintaining restrictions Irish hospitals are contravening WHO and UN regulations but also taking the rights of mums away.

"We are violating a woman's human rights," she said.

Portlaoise is part of an integrated maternity service with the Coombe maternity hospital in Dublin under the HSE's Dublin Midlands Hospital Group. RTÉ has reported that fathers-to-be are left waiting outside, with many in their cars waiting to be called inside by hospital staff.

"Nothing has changed," she said.

Ms O'Tooole said another protest would be mounted in Portlaoise on May 22 if changes have not been made.

It has been reported that the Chief Medical Officer Dr Tony Holohan has said there is no evidence to convince the National Public Health Emergency Team (NPHET) that the restrictions need to be in place.