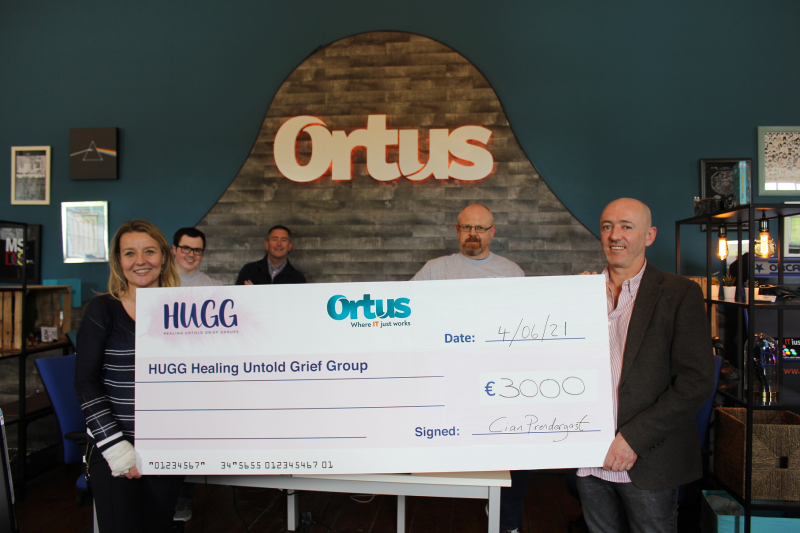 Ortus say their staff are highly engaged with their local community and were keen on doing something positive for charity. Conscious of the devastating events of suicide in the region, the team arranged a charity cycle to raise awareness and funds for the charity HUGG (Healing Untold Grief Groups). Over 30 staff got involved, covering almost 3,000 kilometres during April.

HUGG provides a free, safe and confidential environment where those bereaved by suicide can share their experiences and feelings,

Cian Prendergast, Ortus CEO, commented: “The Ortus Charity Cycle is a brilliant fundraising event, giving Ortus staff the opportunity to come together, get involved in a fun healthy initiative and raise much-needed funds for a fantastic charity. Unfortunately, there’s high demand for suicide bereavement support in Laois and the surrounding counties. We wanted to help raise both funds and awareness for HUGG - HUGG is unique as all their services are delivered by volunteers who have themselves been bereaved by suicide and they’re looking to recruit people in the region. We were eager to help in any way we could.”

All of HUGG’s groups are led by people with lived experience, people who themselves have been bereaved by suicide. HUGG focuses on “postvention” – a specific form of intervention which is conducted after a suicide in recognition of the increased risk of suicidal ideation among the bereaved friends and family.

The peer support groups enable the suicide bereaved to receive and offer support to each other.

HUGG was first set-up as a Dublin-specific support service. However, due to the volume of demand and requirements for suicide bereavement supports nationwide, HUGG has expanded its peer support groups beyond Dublin. Groups in Cavan, Cork, Galway and Limerick were launched in early 2021, with additional facilitators trained to commence in Kerry and Waterford. The peer groups currently meet online and will be returning to in-person meetings when it is safe to do so. HUGG is also establishing permanent virtual meetings for minority groups such as LGBTQ+, Travellers, Youth etc.

Fiona Tuomey, Founder and CEO of HUGG, said: “We’re delighted to receive such incredible support from the team at Ortus. HUGG is an entirely volunteer-led and run charity. It costs €2,200 to establish a suicide bereavement group and over €10,000 to run it annually, so we rely on the generosity of organisations and individuals to ensure we’re able to offer our services where they’re needed. The money raised by Ortus is fantastic and will go towards growing our regional support network.”

People can enquire to attend the group by contacting Fiona at hugg.ie. The public can support HUGG by:

·         Becoming a facilitator if their bereavement is over two years ago

In January 2016, Fiona Tuomey lost her 11-year-old daughter Milly to suicide. Amid the pain, shock, and grief, was a longing to meet others who had walked the same road, but were still living and functioning in the ‘real world’. Fiona found it difficult to find a support group but eventually located one in the Midlands. Here she connected with people who gave her hope and a reason to carry-on. Following extensive research, meetings and discussions to clarify the landscape of suicide bereavement, she established HUGG in 2017 with a single peer support group.