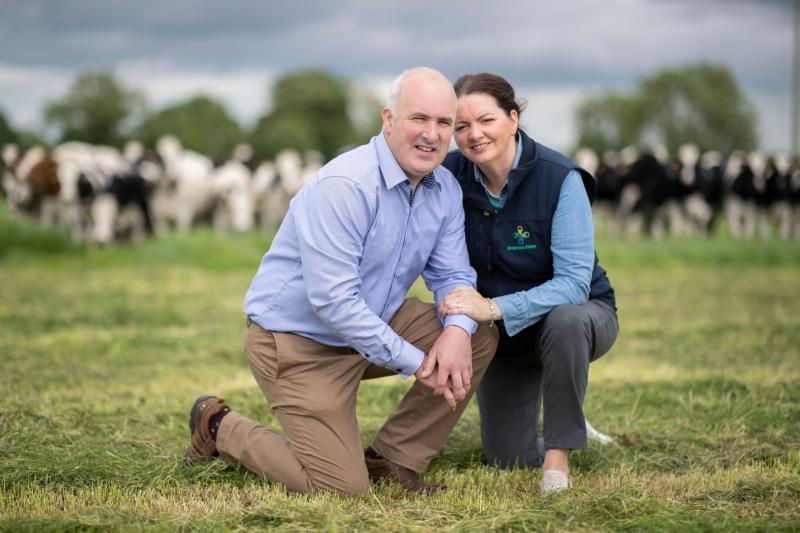 Brian and Norma Rohan on their farm in Laois; Picture: Finbarr O'Rourke;

Following the success of the organisation’s first ever online Remembrance Service last year, Embrace FARM will host its eighth annual Remembrance Service for those affected by farm accidents via live stream on www.embracefarm.com at the end of June.

At the online Remembrance Service last year, over 220 names were honoured and the founders of Embrace FARM. Brian and Norma Rohan from Laois are calling on Irish families to submit names of loved ones who were lost or injured in farm accidents to be remembered at the 2021 Service.

Speaking about the Remembrance Service, Brian Rohan, Founder Embrace FARM said: “We are pleased to confirm that our annual Remembrance Service will be live-streamed on our website again this June following the successful online ceremony in 2020. Similarly, it is not possible to host a physical event due to social distancing guidelines but we understand the importance of carrying on virtually for the many people who take comfort in remembering their loved ones each year at our service.

"The annual occasion offers bereaved families, friends and accident survivors a safe space for them to honour those whose lives have been lost or affected by farm accidents. We will continue to speak their names and would like to encourage anyone from the Irish farming community, family members or friends to send us your loved one’s name and a photograph for inclusion in our upcoming ceremony,” he said. MORE BELOW PICTURE. 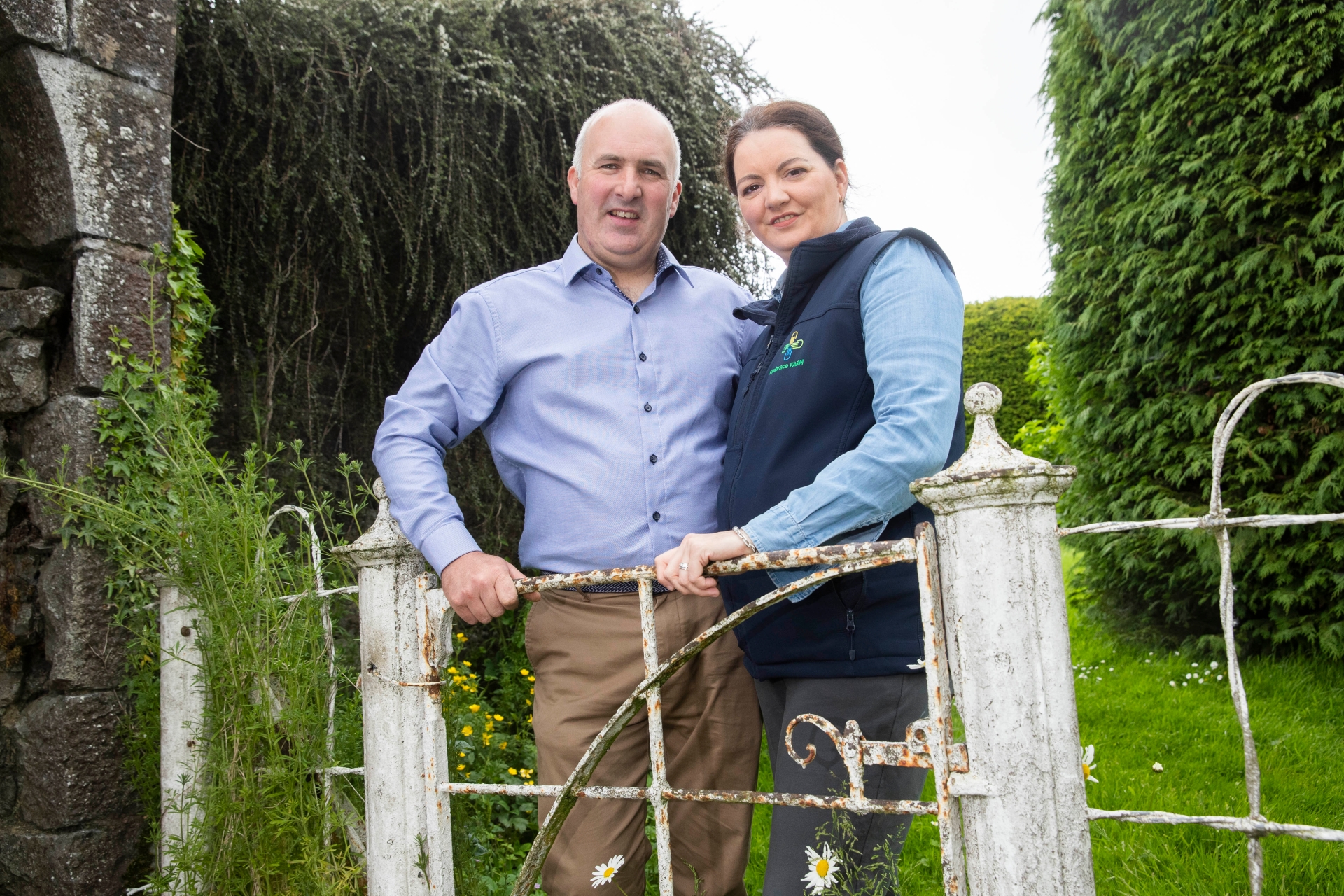 Embrace FARM’s ‘Here For You’ campaign honours the people, communities and businesses who have supported those impacted by farm accidents and the work of Embrace FARM over the years. The campaign acknowledges the community support systems across Ireland, the unsung heroes, many businesses, those who have died or were injured in farm accidents and those who have been left behind in times of tragedy.

Speaking about the campaign, Norma Rohan, Founder Embrace FARM said: “This year, we chose the theme ‘Here For You’ for our annual remembrance campaign to highlight the importance of support in times of great loss, bereavement or accidents. For many people, this past year has been a particularly difficult one, but in difficult times we see a rise in support and togetherness, a sense of community when people need it the most. For this online initiative, we are encouraging people to honour those who have been there for them during the hardest of times.

"On behalf of Embrace FARM, we too would like to acknowledge and thank those who have hugely supported the work we have done since 2014. Without sponsorships, fundraising events and dedication from local community groups, our work to support those affected by farm accidents would not be possible," she said.

People are encouraged to get involved in the ‘Here For You’ campaign on social media by expressing what support means to them and how it has helped during hard times. Join the conversation online by using the hashtag #HereForYou and tag @EmbraceFARM.

The Online Remembrance Service 2021 takes place on Sunday, June 27 at 2pm. To add a loved ones name to the remembrance list please WhatsApp 085-7709966 or email info@embracefarm.com with name, county, year of death or accident and a photograph if available.

The picture below of the Remembrance Service flyer was designed by 8-year-old Nicole Murray who lost her grandfather in a farm accident. MORE ABOUT EMBRACE AND FARM ACCIDENTS BELOW FLYER. 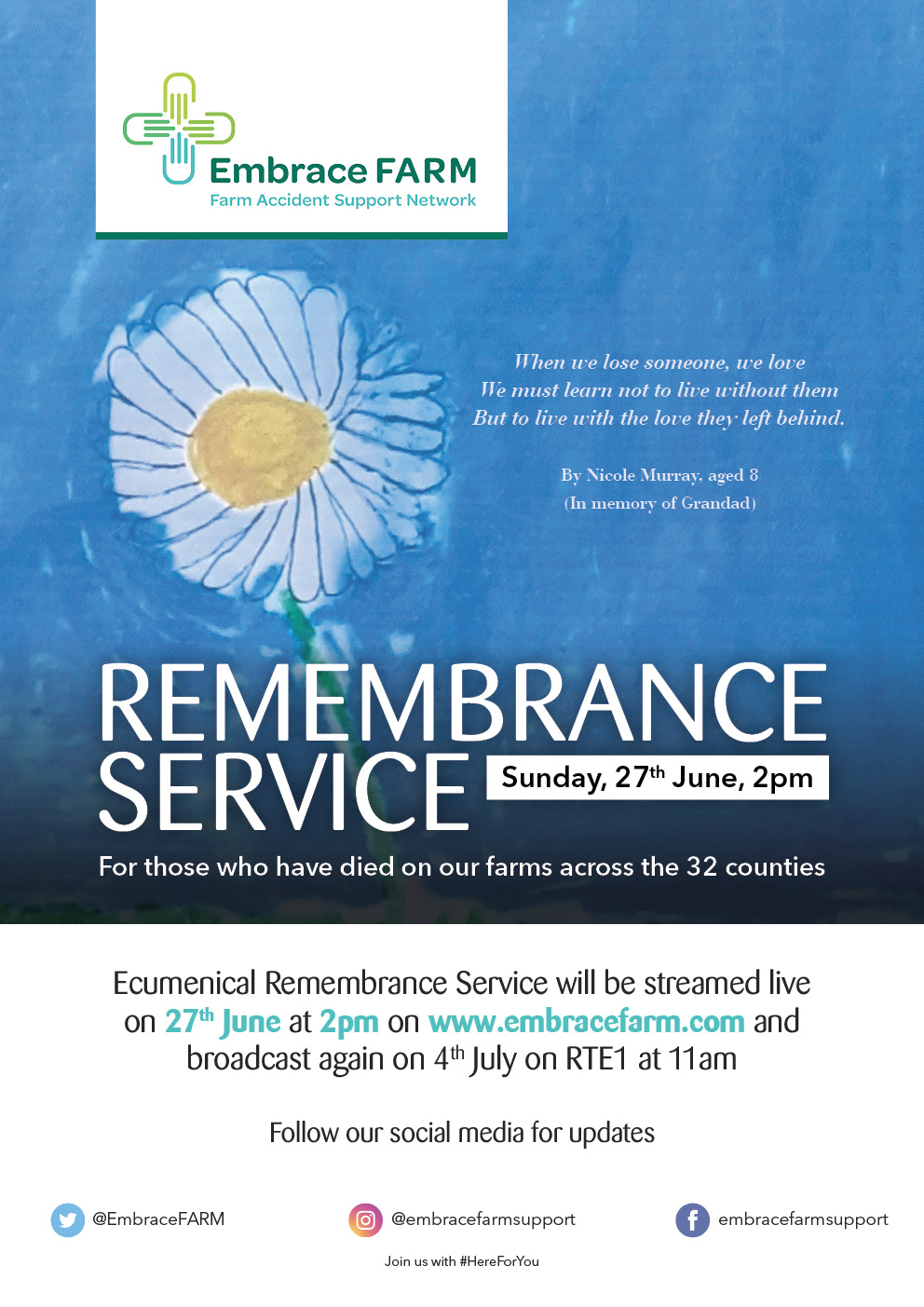 From the period 2011 to 2020 there have been 210 lives lost due to farm related accidents in the Republic of Ireland according to the Health and Safety Authority (HSA).  A further 27 lives were lost from a similar period 2015-2020 in Northern Ireland according to the Health and Safety Executive for Northern Ireland (HSENI). Teagasc research carried out between 2012-2017 estimates an average 2500 accidents per year that result in some level of injury or fatality. Agriculture remains one of the most dangerous industries to work in Ireland.

About Embrace FARM
Embrace FARM (Farming Accidents Remembered & Missed) was established by Brian Rohan and his wife Norma in 2014, following the tragic loss of Brian’s father Liam in a farming accident.

The not-for-profit organisation is the first of its kind to support the farming community and families of Ireland who, like them have experienced the impact of farm accidents. Each year, an ecumenical remembrance service takes place for those who have lost a loved one or suffered serious injury in a farming accident.

Embrace FARM is supported by a voluntary board of directors who give their time freely in the development of the organisation.