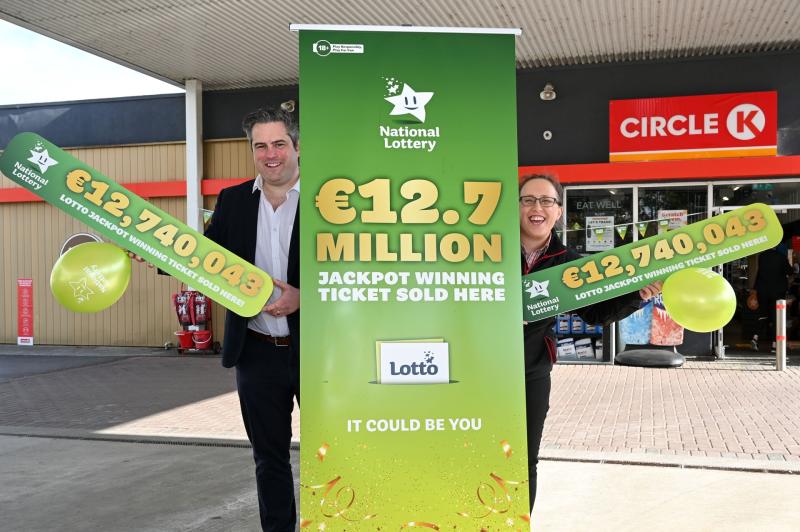 A large family in Co. Kilkenny have gotten their week off to the perfect start by becoming instant millionaires after they finally claimed their Lotto jackpot prize of €12,740,043 which they won on Wednesday 14th April.

The close-knit Kilkenny clan who wish to keep their win private became the 12th largest winners of the Lotto jackpot since the game was introduced in 1988 with a ticket they purchased at the Circle K store on the Waterford in Kilkenny City.

After claiming their massive prize via a remote claims process, the Kilkenny family discussed how they have come to terms with their jackpot win, two months on.

The head of the family syndicate said: “It’s been a very strange but exciting couple of weeks. We wanted to take some time out and get some proper financial advice before we claimed the prize and I think we are more prepared now than we could have been if we had claimed it any earlier. While we have in some way come to terms with the win, you can’t prepare yourself for the moment that you have a cheque for over €12 million in your hands. It’s literally a dream come true for all of us.”

It wasn’t all plain sailing for the lucky Kilkenny family however after a potential mistake on their Lotto play slip delayed their Lotto celebrations for an hour on the night of the draw:

“That Wednesday was one of the most stressful nights of my life,” joked the lucky Kilkenny man.

“I always play my lucky numbers on the Lotto play slip but the previous Saturday night, I made a mistake on it and selected 29 instead of 37. On the Wednesday, I watched the draw live and saw all of my numbers come out one after another. I should have been jumping around with joy but instead this horrible feeling of dread had me wondering if I had used the same incorrect pay slip to play again.

"It took me an hour to pluck up the coverage to even look at the ticket and once I confirmed the numbers for sure on RTÉ+1, it was officially celebration time,” he laughed.

With the cheque now firmly in their hands, the Kilkenny man discussed how each family member has planned for their new-found fortune.

“It’s a lifechanging prize but in our case, it’s life-changing for so many people. We have a large family syndicate who are at different stages of their lives. Some of them will be planning on paying off mortgages, putting deposits on houses, upgrading their cars or just paying off some bills.

"Winning is incredible but it’s even more special when you win with your family and we are all in the same boat. Because there’s so many of us, none of us will be filthy rich but it makes us all comfortable and we’ll be able to make some nice changes to our lives,” he said.