Laois TD meets woman who has strong links with Roscrea 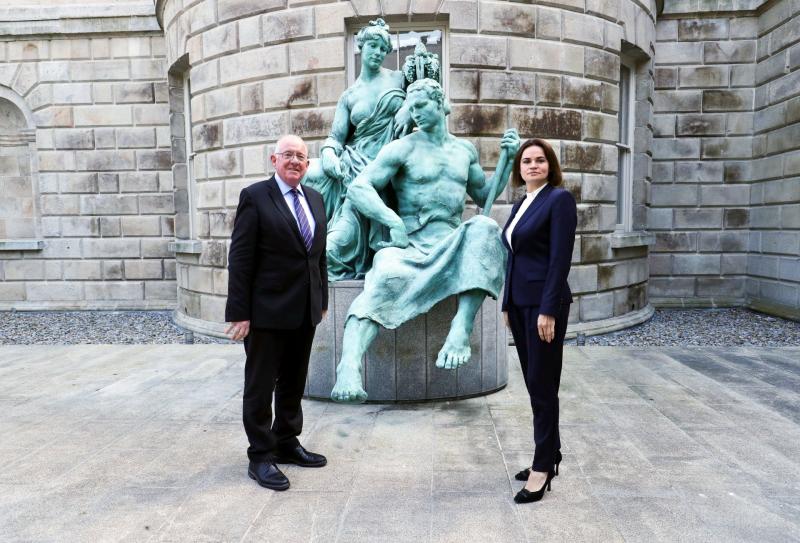 A human rights activist and the opposition leader in Belarus which forced a Ryanair flight off course this year and who has strong links to Roscrea has been welcomed to Ireland by Laois Offaly TD Charlie Flanagan.

Dep Flanagan greeted Sviatlana Tsikhanouskaya on her arrival in Leinster House in his capacity as Cathaoirleach of the Dáil's  Foreign Affairs Committee.

Speaking before the meeting, Cathaoirleach of the Committee Charlie Flanagan TD said members are delighted to welcome Sviatlana Tsikhanouskaya to meet with them as part of her visit to Ireland.

“The situation in Belarus has been a priority for consideration by the Committee in 2021. Along with meeting with the People’s Embassy of Belarus In Ireland earlier this year, the Committee also unanimously agreed a motion condemning the interception of a Ryanair flight by Belarusian authorities and called for the unconditional release and freedom of movement of Raman Protasevich and Sofia Sapega.

"Members of the Committee will continue to support the people of Belarus in their struggle to gain both democratic and human rights,” said the Fine Gael TD.

She contested the 2020 Belarus Presidential election but incumbent Alexander Lukashenko was officially declared the victor in the election marred by allegations of widespread electoral fraud.

Subsequently, Ms Tsikhanouskaya claimed to have received between 60 and 70% of the vote. After the elections, she fled to Lithuania in fear of repercussions, which could have possibly affected her children.

Before running for president, Tsikhanouskaya was an English teacher. She spent many summers in Roscrea, Co. Tipperary, Ireland, as part of a programme for children affected by the Chernobyl disaster.

A Ryanair plane from Greece to Lithuania was diverted to Belarus for several hours on Sunday, with activists saying it was done to arrest a dissident journalist on board.

Return to college under review by NPHET as nearly 1,000 Covid-19 cases confirmed