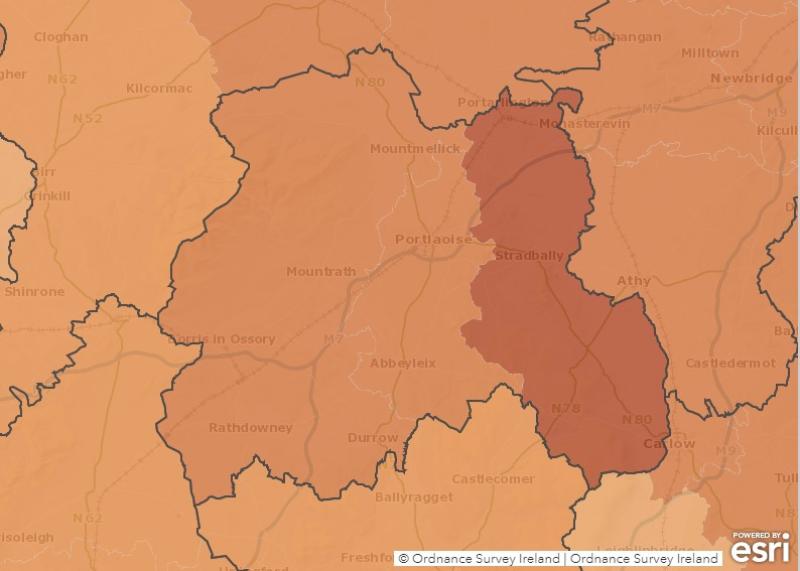 A more densely populated Laois electoral area is one of Ireland's Covid-19 hotspot with nearly 200 cases found in the past two weeks while higher than average infection levels across the county mean Laois has one of the worst levels of infection in Ireland.

The latest Local Electoral Area (LEA) figures as published on July 29 on the Covid-19 Ireland data hub breakdown covers the period from July 13 to July 26. More up to date countywide figures show a slight improvement.

The situation had been relatively steady in Portlaoise through July but worsened latter half of the month. There were 127 cases in the county town up to July 26. This gave a population incidence of 399.4 per 100,000 while the Republic of Ireland rate is 344.2 per 100k.

While the situation is bad in Portlaoise, the latest figures from the Portarlington Graiguecullen LEA show the situation deteriorating significantly to being a Delta wave hotspot.

The worsening of the situation in the area, dominated by two big border towns, is reflected by the fact that there were 92 new cases up to July 19 compared with 25 new cases in the 14 days to July 12. The incidence rate has risen from 89 per 100k at the end of June.

Part of Portarlington is in Offaly which means the town could have a higher rate. The same can be said of Graiguecullen which borders Carlow town. The district has a substantial border with Kildare with Athy a shopping town for many.

The situation has worsened also in the Mountmellick / Borris-in-Ossory LEA where the population is largely rural.

The district is less populated than the others. With 24,807 people it includes Rathdowney, Mountrath, Durrow, Castletown, Camross, Errill, Clonaslee and Rosenallis. It borders Tipperary, Offaly and Kilkenny. MORE BELOW LINK.

Health Protection Surveillance Centre figures up to July 26 for all counties show that Laois had the third worst incidence of the disease in Ireland.

The average number of new cases per day over five days was 31 a day.

More up to date figures show a slightly improving situation. HPSC figures for the two weeks to July 28 show that there were 420 cases in Laois in the 14 days, giving a two week incidence rate of 495.9 per 100k. However, about half of the cases were detected in the previous seven days meaning an incidence of 252.7 over a full week. The five day moving average had fallen to 28 per day by July 28.

At one point in the last week Laois had the second highest incidence of the virus in Ireland with about 35 cases a day.

Laois has now fallen back to having the sixth highest rate as the Delta rate sweeps the country.