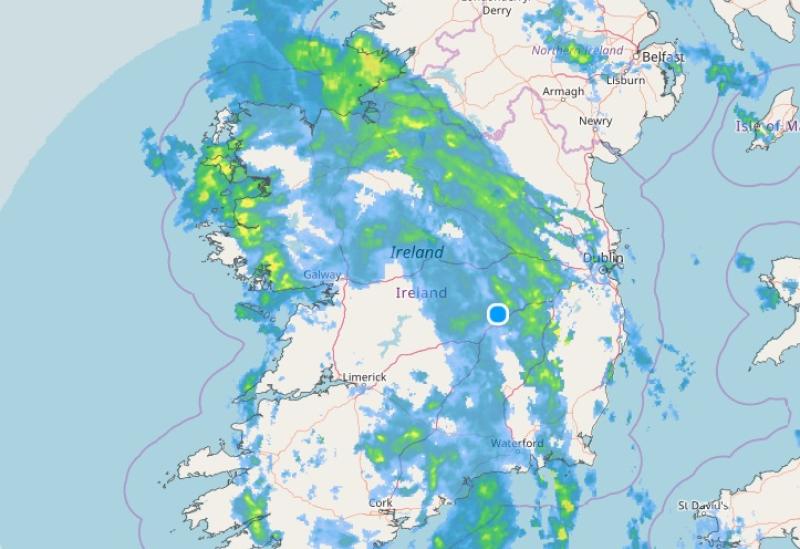 Laois in the centre of a band of rain at Friday lunchtime. Image: Met Éireann

There is a risk of localised flooding in Laois and Leinster with rain to continue for the rest of this Friday and into Saturday, easing somewhat on Sunday.

Here is Met Eireann's weather forecast for the weekend and the coming week.

TODAY - FRIDAY 20TH AUGUST
Overall and cloudy and wet day, just a few brighter spells in northern parts at first. Rain in southern areas will become widespread, with heavy bursts in the southeast of Leinster and along the east coast in the late afternoon and early evening. Risk of localised flooding. Highest temperatures of 17 to 20 degrees in mostly moderate southerly winds, fresh near coasts.

TONIGHT
Rain will ease in parts for a time tonight with quite widespread misty conditions and some fog setting in. However, a spell of heavy rain will move into the southeast overnight. A mild and humid night with temperatures remaining above 14 degrees across much of Leinster. Winds will be mostly light and variable in direction.

TOMORROW - SATURDAY 21ST AUGUST
Dull tomorrow to begin rain lingering through the morning. Brightening up later in the day with heavy or thundery showers developing in the afternoon. Localised downpours bring a risk of spot flooding. Highest temperatures of 17 to 20 degrees. Light southerly winds will become westerly later in the day.

SATURDAY NIGHT: Showers will continue for a time but die out early in the night, becoming dry in many areas. Rather cloudy, with some mist or fog developing overnight. Lowest temperatures of 11 to 14 degrees with a light westerly breeze.

SUNDAY: Any mist or fog will quickly clear in the morning. Scattered showers will develop but they will be much lighter compared to Saturday, with a good deal of dry weather throughout the day. A mix of cloud and some bright or sunny spells, but generally cloudy across the southwest. Highest temperatures of 18 to 21 degrees with a light west to northwest breeze.

SUNDAY NIGHT: A dry and largely clear night. Fog will form later in the night in some parts in near calm conditions. Lowest temperatures of 10 to 14 degrees.

MONDAY: A mainly dry day with good sunny spells, however conditions will be dull in some coastal areas where coastal fog may linger through much of the day. A few showers will develop in the southwest. Feeling warm in any sunshine with highest temperatures of 19 to 23 degrees in a light easterly breeze.

MONDAY NIGHT: Another dry and clear night allowing mist or fog to develop in many areas. Winds will be light and easterly in direction. Lowest temperatures of 11 to 14 degrees

TUESDAY: Mist and fog in the morning will quickly clear allowing for an overall dry and sunny day with just isolated showers. Warm with highest temperatures of 19 to 23 degrees, a little cooler along south and east coast due to a light to moderate southeast breeze. Remaining dry and calm overnight.

WEDNESDAY: Scattered showers will develop with sunny spells. Highest temperatures of 17 to 21 degrees, coolest along the Irish Sea coast due to light to moderate easterly winds.

FURTHER OUTLOOK: Current indications are for it to continue mainly dry on Thursday and Friday with the chance of light isolated or scattered showers. Temperatures will be around 20 degrees in most areas with winds light.

Laois motorway section closing over a weekend for night works