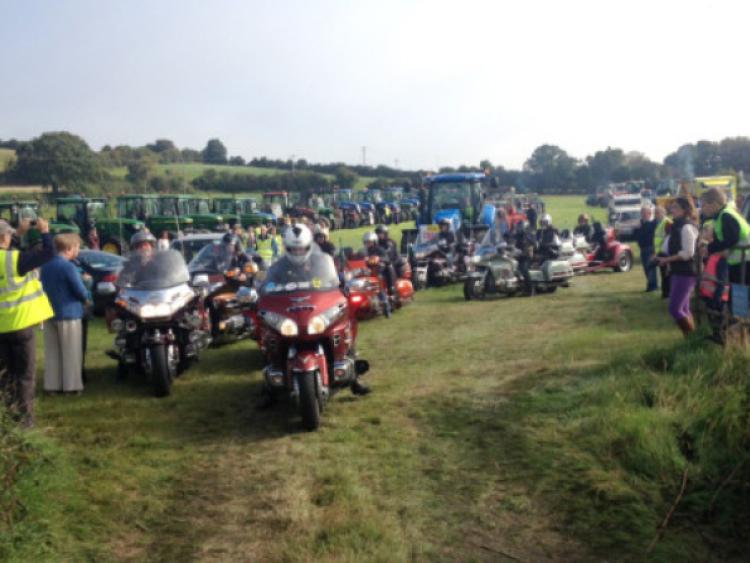 Around 180 vehicles took part in the recent tractor run in Ratheniska as the RTS Substation Action group steps up its fund-raising campaign for its High Court challenge.

Around 180 vehicles took part in the recent tractor run in Ratheniska as the RTS Substation Action group steps up its fund-raising campaign for its High Court challenge.

The tractor run began in Ratheniska, and took in Ballyragget and Ballinakill. It was one strand of a fund-raising campaign for the legal challenge to An Pleanala’s decision in April to grant planning permission to Eirgrid for the Laois-Kilkenny Reinforcement Project. The project will include a A 400/110kV substation situated to the south east of Portlaoise, near Timahoe

The tractor run was made up of 150 tractors along with around 20 cars and 10 or so motorcycles. A raffle also brought in additional funds with Paddy Dooley from outside Stradbally winning the top prize of a shed.

“It was great and we were absolutely delighted with the turnout,” one of the organisers Colm Fingleton said.

The High Court case is provisionally due to be heard in mid November, which is estimated to cost €50,000.

“It was great to get such a crowd and to see so many people travel for it,” Mr Fingleton said.

The organisers behind the High Court challenge also planned to fund raise at the National Ploughing Championships in Ratheniska.

“We are happy enough with how things have gone and are working away on the next hurdle,” Mr Fingleton said of preparations and fundraising.

The RTS Substation Action Group also had a stand at the Ploughing Championships in Ratheniska where they highlighted their campaign and fund-raised further.

“It was very easy to explain our campaign when you had a pylon in full view from where we were. Some people wanted a very in-depth explanation and we got great support. We didn’t get one single negative comment over the three days at the Ploughing,” he said.