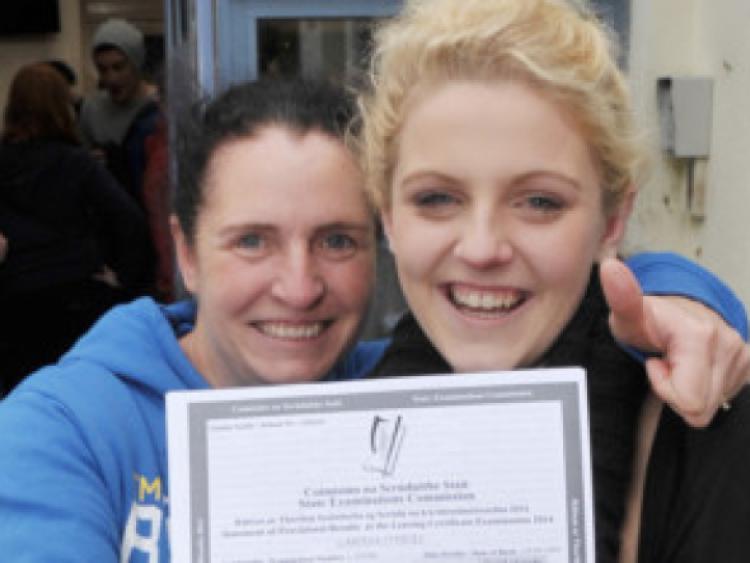 When you can list the late Nobel laureate winning poet Seamus Heaney as a relative then you expect to do well in English.

When you can list the late Nobel laureate winning poet Seamus Heaney as a relative then you expect to do well in English.

That was the case for Jasmin Heaney who was delighted with her A2 in English. “I was saying prayers to him,” she said of her famous relative who passed away in the past year. Perhaps there was a touch of fate for Jasmin as she sat her Leaving Certificate in a year when he was always likely to feature heavily. “I did get what I needed but I wasn’t expecting to do so well. I’m chuffed,” she said of her results. She may go on to be a gym instructor or study psychology or English.

Larissa O’Neill declared herself to be “over the moon” with her results while her even more ecstatic mother screamed “Oh, my God” and said she was “very, very, very proud”. Larissa, who was delighted to pass higher maths, plans to study nursing at St. Angela’s in Sligo.

Jordan Maher plans to do carpentry. “I did class. I didn’t fail anything. I thought I was going to fail maths,” he said.

Graham Hoey was also relieved to pass maths. He has already secured a place to study as a fitness instructor.

Ciara Gregory was also pleased with her performance. “I’m delighted. I got my A in English. I am quite happy,” she said. She plans to do nursing in Athlone IT.

Patrycja Rajska was also thrilled with her results. “I’m delighted. I’m over the moon. I passed everything,” she beamed.

Cian Dunne was taking everything in his stride. “I am very happy - there were no surprises,” he said. He plans to do physiotherapy.

Craig Keenan also was relieved. “There weren’t really any shocks,” he said. He hopes to be a maths actuary.