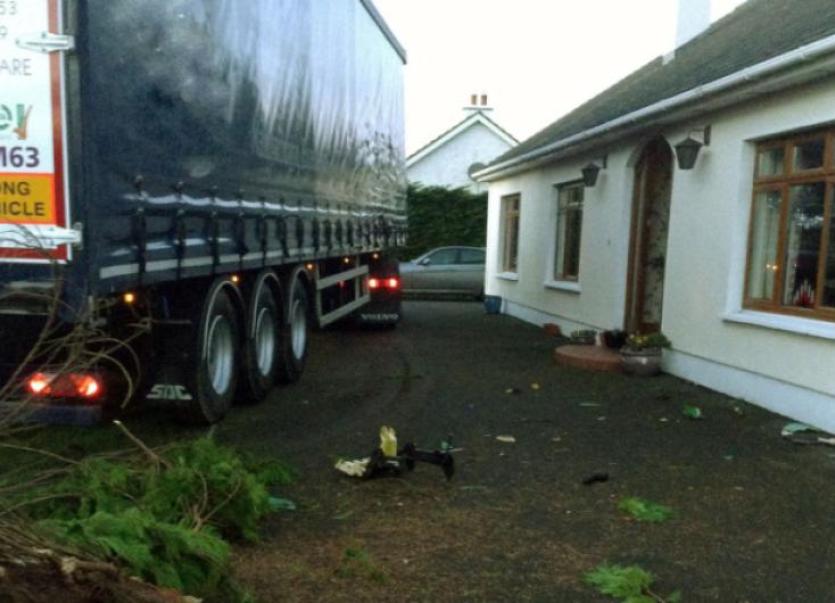 The lorry that crashed through a concrete fence at Kilmullen in 2013, where a recent road fatality happened.

A road where a young man met his death recently in Portarlington, needs urgent extra safety measures, according to concerned residents.

Kilmullen road in Portarlington, Laois has long been a scene of multiple road accidents, and now residents are holding a public meeting and asking Laois politicians to attend and act on their behalf.

Last August 22 year old Daniel Delaney from Kildare was fatally injured when his car hit a wall on the road. It is one of many accidents on the road, many of which residents say aren't even reported.

In 2013 an articulated lorry smashed through the garden wall of a house, stopping mere feet from the house. Residents at that time warned Laois County Council that they would have "blood on their hands" if the road was not made safer. The council followed up by lowering the speed limit to 60km/h, changing the road surface and doing works on a bridge.

However residents now say more is needed. Mother of three Shauna O'Kane says they have long asked the council for more safety measures.

"At one point in 2012 there was an accident every second day for a week. After the lorry accident, the council did spend money upgrading the road and Kilmullen bridge. But they left a mile long stretch that we live on that is hazardous and dangerous," she said.

About 22 houses are on the road, many with young children.

"I cannot let my children visit their nana or cousins because they cannot safely walk on the grass verge. Cars have ricocheted off it and toppled over. You can't step outside your house without warning your kids, they can't play in the front gardens," she said.

It was her sister's house that the lorry crashed into.

"That could have been a child killed," Shauna said.

Residents are "in trauma" since the road death last month. See report on the death here

"We are living in a state of fear. It was absolutely horrific. It was in the early hours on a bank holiday Monday, my neighbour Madeline woke up to the sound of the car going into an ESB pole. She has not been able to sleep properly since, as she sleeps at the front of the house. She is extremely traumatised, and devastated for his family. We have been informed that he was not speeding excessively. There have been copious accidents at that spot," the mother said.

The residents want traffic that is sent from the motorway along their road to the west, diverted along another route. They suggest that the road be made safer by the council buying land beside it to make a new road.

"The traffic count done in 2012 was 3,000 vehicles a day. Last week another was done and my understanding is it has risen to about 4,000. The speed they use on the road is lethal. More needs to be done," Ms O'Kane said.

The residents are meeting at 7.45pm on Thursday evening September 7 in Ms O'Kane's house. They expect local county councillors to attend, also inviting Deputy Sean Fleming, Portarlington Gardaí, and a representative from the nearby slurry company.

"We do not say slurry on the road is the cause, but it is a factor, perhaps they need a wheelwash or lighting at that point, little things could help," she said.