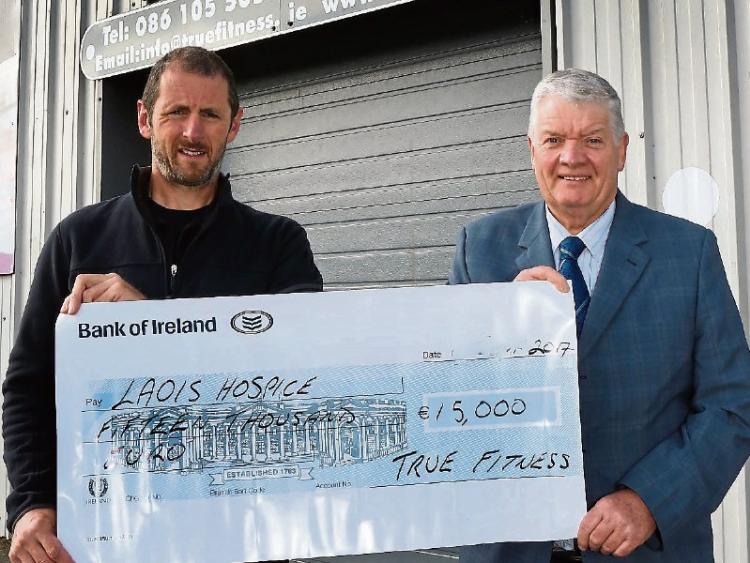 An epic adventure in North America has culminated in a donation of €15,000 to Laois Hospice to provide crucial services in Laois to people with terminal illnesses and their families.

John Bolton from Portarlington recently presented Laois Hospice with a cheque for €15,000 he raised from a marathon trek across North America.

In June 2017, John set off on his marahton cycle 4,500k off road from Banff in Canada to Antelope wells New Mexico in aid of Laois Hospice.

This cycle brought him through the remotest parts of the Rocky Mountains through British Columbia, Montana, Wyoming, Colorado and New Mexico.

Apart from the trip itself, John put in a year of training which involved many chilly cycles in the Slieve Blooms.

Speaking after the cheque presentation, John told the Leinster Express he was delighted to help the hospice. He has been fundraising for the charity for the past 15 years.

“It was for a very worthy cause and we always get a very good response everytime we fundraise. The challenge itself had been so big that it was nice to be able to raise so much money. I put a lot of time in training last year and it is always good to get such a response especially for the hospice,” he said.

John thanked all who supported and his sponsors.

He has nothing definite planned for the next challenge but admitted that 'there was always something on the back burner.

John has recovered from his American adventure, which, amazingly, he says wasn't his toughest.

“It was a huge adventure and was physically very very tough but I'd probably say the kyak around Ireland in terms of risk was the toughest,” he said.

“John has been a serious supporter over the years and he went over and above that in 2017 with what he did in America.

“He has been consistently doing it for many years. His heart is in the right place and his committment is there, ” said Seamus.

Apart from the physical effort, the hospice chairman praised the Portarlington fitness instructor for getting bike and flight sponsors.

Mr Donoghue thanked all of John's sponsors who, he said, really 'came up to the mark' and the public for donating .

He said all the funds raised would go to providing free hospice care to Laois people and families who need care.

During the trip John cycled up to 15 hours per day for up to 35 days in extreme weather conditions from very cold to very hot and high altitudes of up 3500m. During the entire cycle he climbed heights the equivalent to climbing Mount Everest seven times.

To help raise money for the Laois Hospice there were a number of advance fundraisers including an eight hour cycle at the Laois Shopping Centre, bucket collection on the streets of Portlaoise, quiz nights, supermarket collections.

Donations were also made directly to Laois Hospice.

This was not John's first time to participate in an ultra endurance event. Over the past ten years he has been raising money for Laois Hospice through trekking 21 days in the Himalayas to Everest Base Camp, to Kayaking 1600k around Ireland in 41 days, cycling 2000k in 7 days around Ireland to mention but a few.