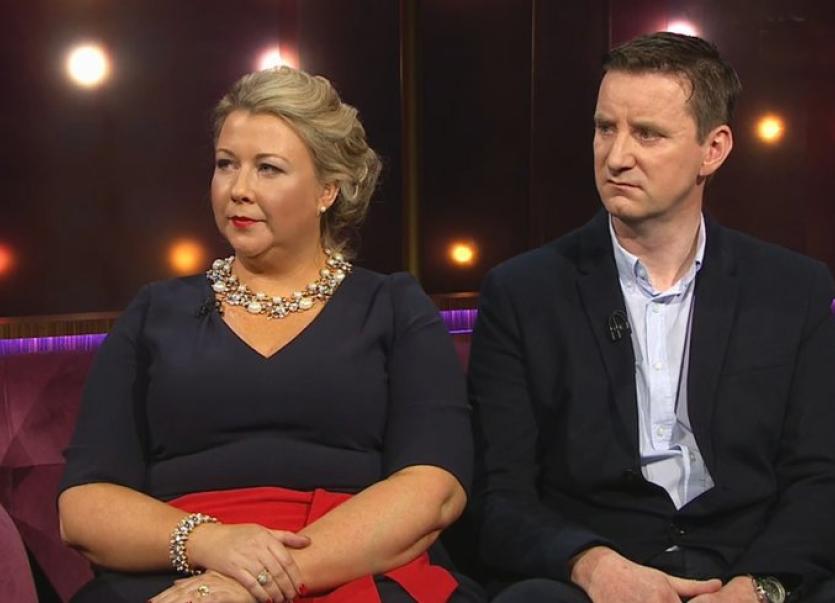 Drink driving crash victim from Portarlington mum Gillian Treacy, is out of her wheelchair, back on her feet and ready to play an even bigger role in road safety.

Mrs Treacy was this week appointed as a Board Director with the RSA, and she hopes she can help prevent further lives being lost due to drink driving on Irish roads.  For the past year Gillian and her husband Ronan have fronted a  RSA campaign to stop drink driving.

It follows a horrific four years for the Treacy family, since their car was hit by a drunk driver in Portarlington in 2014. That collision instantly claimed the life of her three year old son Ciarán, and left her with multiple injuries.

Her leg was so badly was crushed that Mrs Treacy underwent many operations to avoid amputation. However after having it surgically re-broken and put in an external brace last year, she is now able to walk unaided, albeit with pain.

“I am doing good. There are no more surgeries, I'm beginning to get there although the weather is playing havoc. this time last year I was back in a wheelchair. It's been a hard year. I am glad to be up and about walking and doing something that is important. I am still in pain but on the grand scale of things I am a lot better,” she said.

The family then had to attend the court case for the drink driver, Finbarr O'Rourke, and later an appeal he brought against his sentence. The Portlaoise man is now serving a prison sentence of eight years with two suspended, for dangerous driving causing the death of Ciarán.

Over Christmas 2016, Gillian bravely became the face of a heartbreaking multi-media campaign by the RSA, with Ronan, and Laois emergency and medical staff. The ad showed a video of Ciarán, and recalled that horrific day and the trauma that followed.

The campaign was central to the RSA's 2017 Christmas campaign - something that would be incredibly difficult for Gillian.

"It came on first this year when I was in the kitchen and the kids were in bed. For a second I thought, that poor woman, then I stood looking at it thinking 'that is me, and Ronan, and Ciarán. It hit me big time. I don't feel sorry we did the campaign.

"It was a huge decision to open up our personal lives, but if it is bringing road deaths down, and they were the lowest on record this year, then I stand by it," she said.

It was her husband Ronan who had suggested she go for the job of Board Director with the RSA.

"I am thrilled, it is a great legacy for Ciarán. I can bring a human approach to the RSA, we can put in our own personal experience. You could talk facts and figures all day but we know what it is like to be on the other side," she said.

"It will be a full on job, with meetings in Dublin and Ballina and Road Safety Authority duties," she said.

The Minister for Transport, Tourism and Sport, Shane Ross welcomed her appointment, as well as that of Ms Donna Price, as two new directors are in the area of Road Safety Advocacy.

“I am delighted that our new Board members are active in the area of Road Safety Advocacy. Their bravery in the face of personal tragedy has already inspired others and made many aware of the significant dangers on our roads. Their passion and their personal experiences will drive the board to take further measures in pursuit of saving lives," he said.

Roadworks in Portarlington for two weeks

2017 was the safest year on Ireland’s roads since road deaths were first recorded in 1959, with 158 deaths recorded.