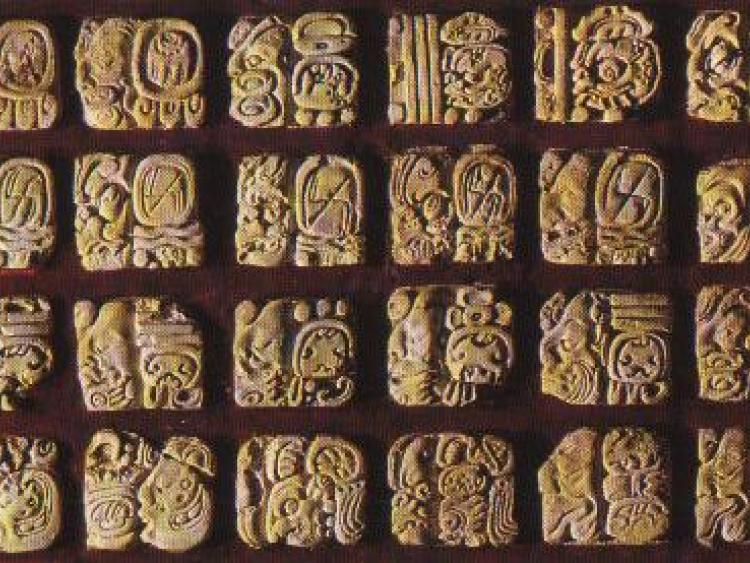 An example of Maya hieroglyphics

A Cambridge Professor of Archaeology  is appealing for information about a Portarlington man whose hobby was the decipherment of Maya hieroglyphic writing.

"Can I appeal through your readers for any information they may have about the late Richard Charles Edward LONG (1872-1951) of Portarlington, a solicitor there from the time he qualified in 1896 until his death?

"His spare-time occupation was the decipherment of ancient Maya hieroglyphic writing in Central America, and he made a number of very important discoveries, including that of a very long period of time 8,000 years long in the Maya calendar.

"I promised the Royal Irish Academy an article on "The Irish and the Maya", and Mr Long should play his part in it. As it is, I have been unable to find a picture of him, or any obituary; (Mr Ronnie Matthews supplied me two years ago with a photograph of the former Long house in Portarlington; but a friend from UCC Cork has made several attempts to visit the Church of Ireland burial ground to see if there is a gravestone, and to contact the Rev. Leslie Stevenson, both to no avail).

"In the only published obituary, in a Mexican journal, he was described by the late Sir Eric Thompson, the doyen of Maya studies last century, as "a very fine example of the cultivated amateur which the Victorian age produced in number. "Members of that group possessed a broad cultural background...with his passing on October 25th 1951 the small group of scholars in the British Isles interested in the ancient civilisations of Mesoamerica suffers a serious loss".

"It would be good if he could take his proper place in the intellectual history of Ireland, and I hope your readers may, even almost seven decades after his death, be able to assist me."