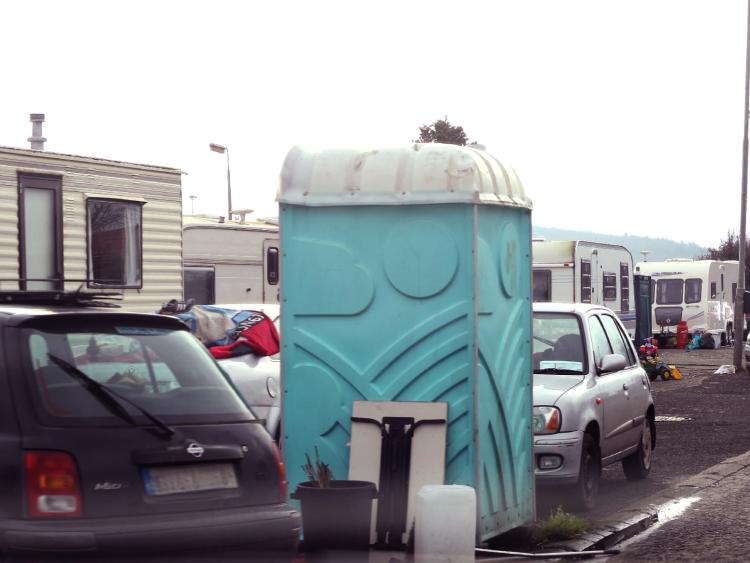 Travellers, who live in Portarlington on the Laois Offaly border, are to be the subject of a special meeting between the Gardaí, Laois County Council and local politicians.

The meeting was called for by two local councillors, who say that people are angry and in fear over an unofficial roadside encampment on Canal Road settled for the past two years.

The site was located on council owned land at the entrance to a site for a new boys school. It was recently cleared, but the group settled again next to it.

Cllr Aidan Mullins, Sinn Féin, called for the special meeting, at the February meeting of the Portarlington Graiguecullen Municipal District.

"I'm bombarded with complaints about these Travellers misbehaving, their disdain for the community, that they are making threats and intimidating people. Council officials have been threatened. The local Tidy Towns didn't put an entry in last year, this is one of the reasons.

"The community is inflamed over what's been allowed to happen in the last year and a half. This is not an anti-traveller motion. This group's actions are alienating the community and causing resentment," Cllr Mullins said.

His motion asked the council to form "a common strategy and procedures to deal promptly with incidences as they arise, of temporary dwellings in Portarlington and other areas".

"I don't see why it's one law for some people, another for another. Tonnes of rubbish were removed, contractors had to be brought in and barriers put up. Now they are at the entrance to the GAA and nothing has been done. The GAA don't have resources to go to court," Cllr Mullins said.

He wants staff from Housing, the Environment and Planning to come together to form a strategy.

He was seconded by Cllr Tom Mulhall, Fine Gael.

"I fully support this, it is a serious ongoing issue. These are temporary dwellings parked in a very inappropriate place, they have made it their own with portable toilets, sheds, animals, ducks, chickens. There is a road safety issue because their children are very close to the road.

"This is not discrimination, but an ideal location needs to be found. they are parking at Odlums, the GAA grounds, close to residential houses. They have a place in the middle of the town for horses and sulkies going around the town. This is not good for Portarlington.

"I'd be afraid that this would get out of hand, that members of the public would take the law into their own hands," Cllr Mulhall said.

He wrote to the Portlaoise Garda Superintendent and received an immediate reply that he would be anxious to sit in on a meeting. He said that Portarlington's Garda Sergeant is also eager to attend.

The reply from Ms Daly, Senior Social Worker with the council, is that "the parking of temporary dwellings will be dealt with on a case-by case basis, in accordance with the relevant legislation. each case will have its own individual set of circumstances in relation to accommodation needs, location, road safety and possible environment issues".

A meeting with all relevant Council Sections and the Gardaí is being arranged.