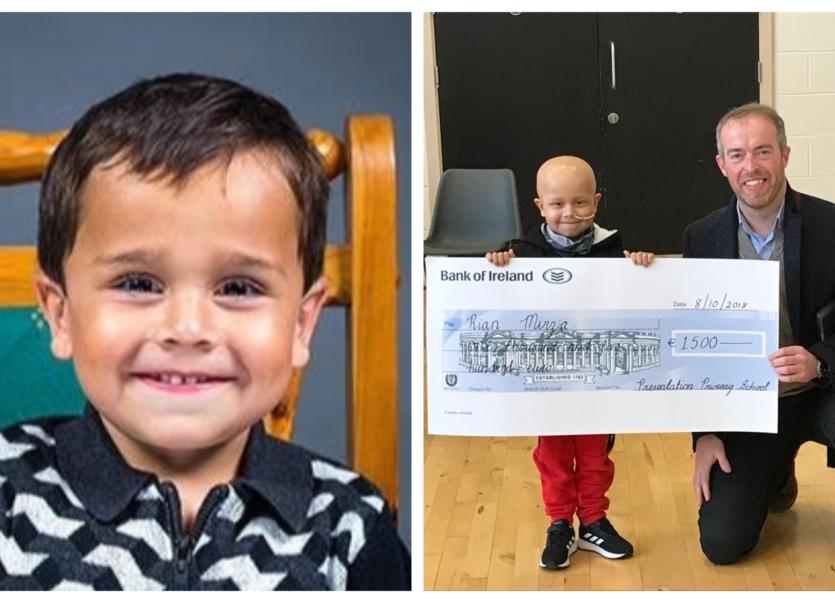 A brave little Laois boy is undergoing radiotherapy every day as part of 18 months of treatment in his life-threatening cancer battle.

Five-year-old Rían Mirza from Portarlington is over halfway through intense treatment for stage 4 neuroblastoma.

Rían was diagnosed in January of this year. Doctors discovered a 6lb tumour in his abdomen and found that cancer had spread to his bones and bone marrow.

During the summer, Rían had major abdominal surgery to remove a tumour. He has undergone aggressive chemotherapy and a stem cell transplant which required a month in isolation. 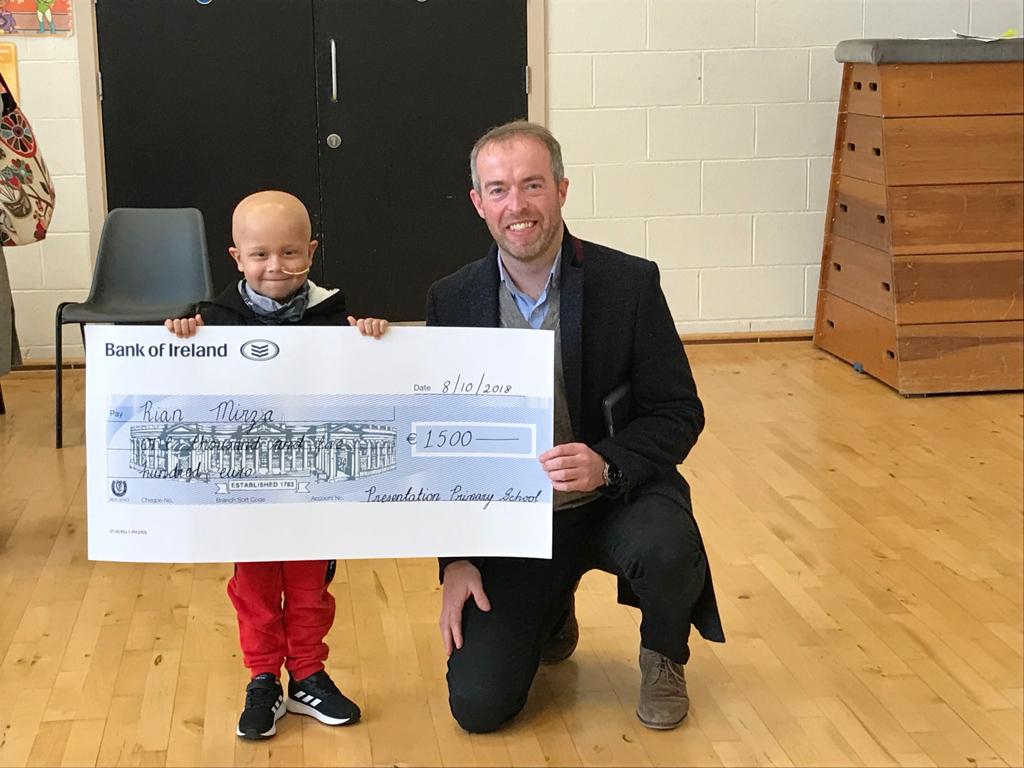 Rían is currently having radiotherapy every day, he will start immunotherapy after this phase of treatment. Rian is in St Luke's hospital every day and in Crumlin weekly.

His diagnosis came as a huge shock to his parents Charlotte Kelly and Asim Mirza.

“So far he is tolerating it fairly well. We don’t know the exact outcome, he has six months of immunotherapy ahead and we won’t know until next summer when he finishes his treatment and we have to wait for the scans.

“He is a right little trooper, he had a stem cell transplant in the summer and is attending Crumlin every day for 100 days post-transplant to monitor it, his immune system is very low because of all that. We are over half way through and plodding along,” Charlotte said.

She explained how the family has coped since their lives were turned upside down in January.

“The first four months were a complete and utter blur.

“You can’t cope with what you’ve been told and the horror of what your little boy is dealing with. It is weird how you can come to terms with it and it becomes a new normal if you can call it normal.”

In July, Charlotte was worried about going public with a fundraiser for Rían but says the huge local support has lifted a weight off their shoulders.

“I don’t regret it at all, there has been a phenomenal response and the money helps to cover the cost of going up and down to hospitals, keeping cars on the road and keeping a five-year-old happy.

“It has been a horrendous, really tough year so far and there is still a way to go. Hopefully, we will get good news and we work towards that, hope and pray he is going to be okay.

“We have a brilliant support network we couldn’t ask for better neighbours or better support, he is like a little celebrity when we go downtown, he asks ‘how come they all know me?’ but it is great for us as a family to have such immense support from neighbours, they don’t hesitate to help,” she said. 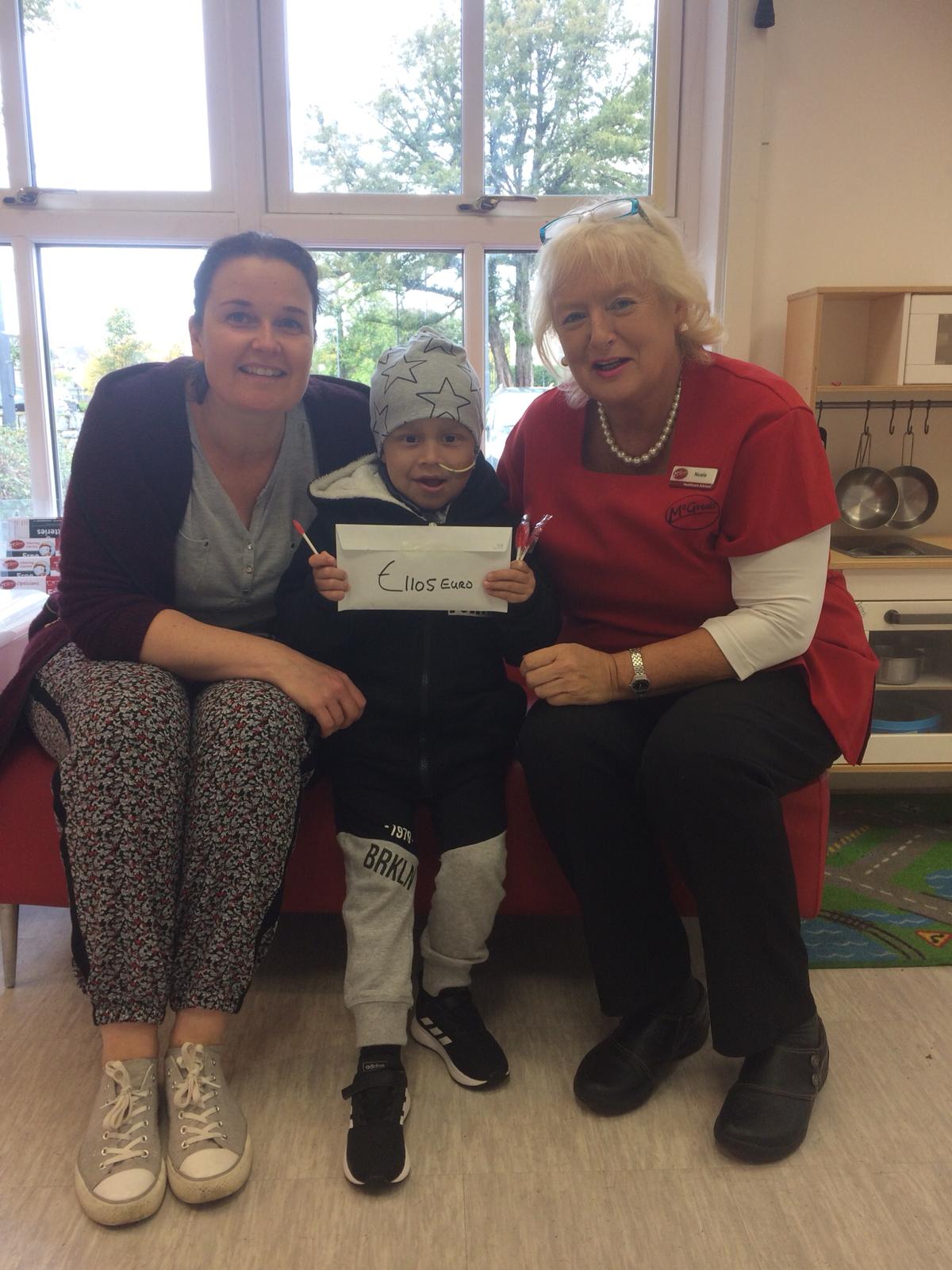 Rían is in senior infants in Presentation Primary School Portarlington but he has not been able to attend school this year.

He visited the school last week to see his friends and he was presented with a cheque for €1,500 they raised for him at a non-uniform day.

He is a happy little boy despite his tough battle and his positive attitude has helped to carry the family through this difficult time.

"He is not able to go to school at the moment and he is very upset that he can’t be in school because he is a little character and when we went in he was dancing and giving high fives.

“He knows he has an illness and that a bump was taken out of his tummy. He doesn't know exactly how sick he is or for how long his treatment will go on.

“He can grasp that he is sick, he has a tube in his nose and he has no hair, other children ask him about it.

“Other than that he is like any other child, he wants to be outside and he wants to be in school. He is a cheeky chap and we are just trying to be normal.

“His body is sore and stiff but you’d be surprised at how children can bounce back he’s all go and wanting to be outside playing in the fresh air and running around.

“Children don’t know any different, they don’t have the same barriers we [adults] would have mentally, it is not in them to be negative, he keeps us going and we have got no choice we just have to put one foot in front of the other,” Charlotte said.

An online campaign raised over €12,000 for the family during the summer. This money has lifted a huge burden off the family as Charlotte now takes care of Rían full time and Asim works part-time.

There has been huge local support with fundraisers in Portarlington that have also helped the family to be more comfortable during this tough journey.

Portarlington has rallied behind the Mirza family with numerous fundraisers.

The Presentation Primary School raised €1,500 at a non-uniform day. Principal Cathal Ruane said it is a tight-knit community.

“We look after our own here, we do our bit to support each other. We run a tight-knit community and when someone is in need, we help out,” he said.

“You should have seen all the buns and cakes in here on the day there was great camaraderie it was wonderful, the local support is so so good.