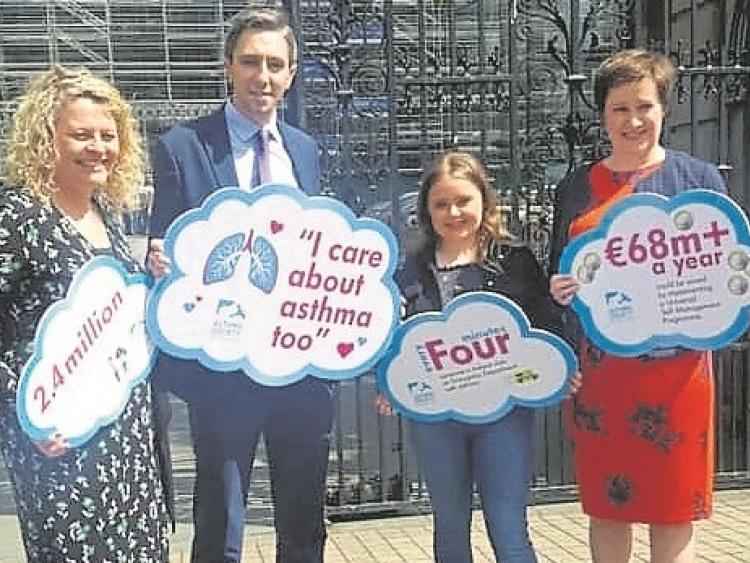 18 year old Laois girl Rebecca Houlihan spoke in Leinster House recently on behalf of herself and all people who suffer with Asthma, to help raise awareness.

Rebecca who is from Portarlington had her first asthma attack aged just six months.

She now has a serious form called Brittle Asthma which requires four injections of medicine, two in each arm, every fortnight in St James's Hospital in Dublin.

Attacks can still happen to her any time and often result in week long stays in hospital on a nebuliser or even a CPAP to deliver oxygen.

“It is uncontrollable, an attack can be triggered just by running upstairs. Even carrying my schoolbag brought on an attack. It is scary, just one deep breath is all you want,” Rebecca said.

She had already met Minister Simon Harris several times to raise awareness on behalf of the Asthma Society of Ireland, and was initially nervous to address the Dáil.

“I know that telling my story may help others in the future so I put my nerves aside, to get through to people how serious asthma is. People can actually die and people don't realise that. I am lucky to have a medical card but some people can't afford to go to the doctor and then it gets worse and they end up in hospital,” she said.

The Asthma Society is asking the government to give one free yearly GP checkup to everyone with asthma to form a personal action plan.

Her mother Michelle is rightly proud of Rebecca.
“She is phenomenal, you would think she is a politician. I am so proud of her standing up and finding her voice to speak out,” she said.

Rebecca has just completed her Leaving Cert at Coláiste Iosagáin, despite coping with a chest infection in the final week. She hopes to study criminality and law or forensic science.

Newly published research by the Asthma Society of Ireland shows that one in 13 Irish people has asthma. It costs them on average €1,242 a year. Ireland had the highest death rate out of 14 EU countries in 2015. The research was conducted by consultancy company, Salutem Insights, which is owned and managed by Laois man, Ger Slevin and Sandra Redmond.

“We are getting asthma management wrong – structurally, it revolves solely around the asthma patient in crisis and fails in creating long-term control," the Society has said.
The annual Irish economic burden of asthma is €472 million. In 2017, there were 2.4 million GP and 625,000 Practice Nurse asthma consultations; 421,000 Specialist and 133,000 Emergency Department visits; 8,000 hospital admissions.

The society says that implementation of an asthma self-management programme could reduce asthma hospitalisations by up to 50% and could potentially save €102 million a year.

Easing the Economic Burden of Asthma – The Impact of a Universal Asthma Self-Management Programme 1 is the first prevalence and impact assessment of asthma since 2001. See www.asthma.ie