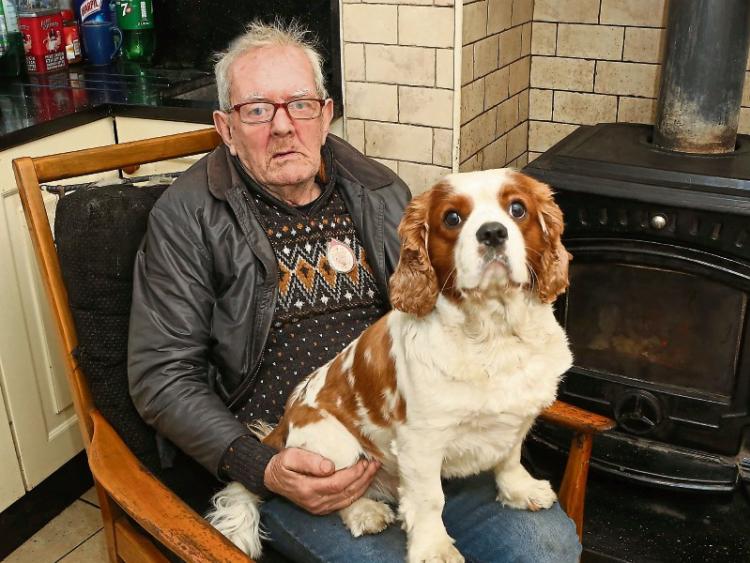 An elderly Laois man has luckily escaped unharmed from a housefire even going back to rescue his dog.

Now the Portarlington pensioner has a repair bill that he cannot afford.

A fundraiser has been started to cover the €11,500 cost, with thousands already pledged.

Paddy Devlin, 78, lives on Foxcroft Street with his beloved King Charles dog Louis. The retired steel worker is a bachelor and has no family living near him. Every day he goes to Mass and does the Stations of the Cross.

He woke to his bedroom in flames last December 9 2019.

His friend Stephanie McEvoy who regularly visits Mr Devlin to check on him and help out, explained what happened.

“He left a tea candle lighting at the altar in his room and had gone to bed with his dog. The bedroom caught fire. It even burnt the plaster off the walls,” she said.

Mr Devlin managed to get out to safety. He even went back in to rescue Louis the dog.

The ambulance and Gardaí attended as well as the fire service but Mr Devlin didn’t need hospitalisation.

“It's a miracle he got out. He was very lucky,” Stephanie said.

Stephanie brought the pensioner out to stay in her house but she said he was always anxious to get back home.

“He was not happy out of his familiar environment,” she said.

Because of this Stephanie said that they agreed to get the bedroom repaired as quickly as possible.

It is all fixed now and he is back home. However he has no house insurance to pay for it and they did not expect the cost to be so high.

“I thought Laois County Council would help but unfortunately my mistake is I didn’t get quotes before the works,” she said.

“A local Portarlington pensioner who has spent years helping out in our community, now needs our community's help. On Sunday, December 9th Paddy Devlin woke up to find his house in flames. Thankfully he managed to escape unharmed, but is now facing a costly repair bill and has no home insurance,” she wrote.

“All donations, no matter how big or small would be greatly appreciated in helping this wonderful man in his time of need,” she said.

She also thanks Nuala McMahon who has offered to hold a coffee morning. The Love Port social media page is asking for donations.

“Can you show support to a local man in the community whose house burned down in December. He thought he was getting financial assistance from local councillors but he has a large bill to pay the contractor now and no way of paying it,” they said. By January 23 the fundraiser stood at €380.