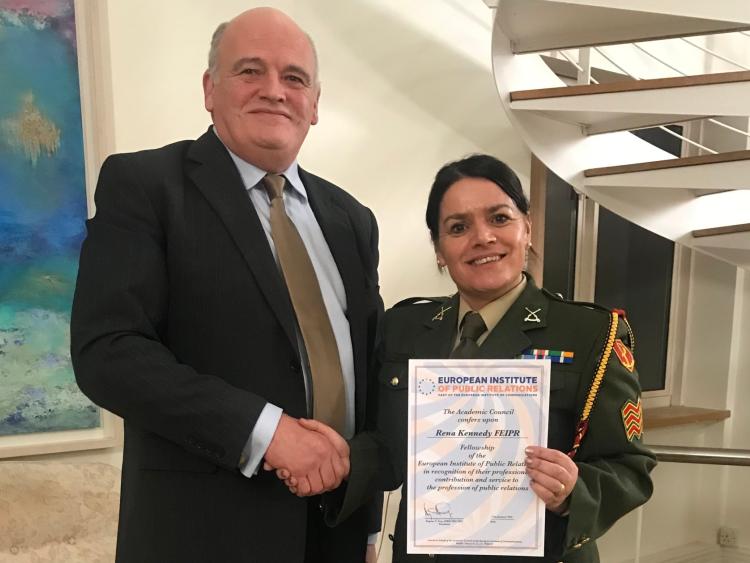 A Laois soldier who has served 25 years in the Defence Forces has been awarded a prestigious academic fellowship.

Sergeant Rena Kennedy Killeen from Portarlington was stunned to be presented with the Fellowship of the European Institute of Public Relations recently.

It was presented to her on stage after she had given a guest lecture at the institute on the role of a press officer.
“I was speechless for once. I don’t like the spotlight on me, but it was nice to be recognised for doing my job,” she told the Leinster Express.

The award was given to mark her outstanding contribution to public relations both nationally and internationally.
Rena is originally from Ballycumber in Offaly and now lives in Bracklone Street with her husband and two daughters who attend Portarlington Presentation Primary school.

A press officer with the Defence Forces, she recently wrote the press television scripts for high profile events like Queen Elizabeth II’s visit, and the 1916 celebrations. She has also accompanied VIPs like An Taoiseach Enda Kenny and national journalists on trips.

Rena has also served overseas in Lebanon, Kosovo and Liberia, and intends to continue her job for years yet.

She always wanted to be in the army.
“I heard as an 11 year old about the Niamba ambush in Congo, and that sparked my interest in the United Nations and serving abroad. I graduated from business management in DIT College of Marketing in 1994 and I joined two weeks later,” she said.

Her father is Sean Kennedy and her mother is Jenny Hennessy from Portarlington.
“No relations were in the army but they weren’t surprised, I had always said some day I would join,” she said.

“The biggest shock was going from student life and a flat in Drumcondra to being confined to barracks, told when to eat, what to eat, what to wear, how to walk, how to address others. But it doesn’t take very long to adjust to the life,” she said.

“There were just three other women with me and we are still best friends to this day,” she said.

She first served in the 2nd infantry battalion in Cathal Brugha barracks, moving to headquarters in 2005.
“The overseas trips were very different missions. I will never forget the abject poverty in west Africa of the children in villages and towns. Education is so vital to them, all they want to do is learn and unfortunately for girls especially they don’t get the opportunity,” she said.

She volunteered in a AIDS hospice in her downtime at weekends.
“You would be feeding children that probably wouldn’t be alive the following week. I learned great life lessons. It was a hostile, volatile environment. I lived in a tent for six months, you get used to the small space and you learn tolerance, patience and understanding,” she said.

She says there are equal opportunities for female soldiers in the Irish Defence Forces.
“There is no job you are prevented from doing regardless of gender. The Defence Forces also encourages and supports continued professional development so I have done many courses with the institute,” she said.

The biggest changes she has seen are in technology and online media.
“We were one of the first to embrace social media with a Facebook page, but we don’t neglect the traditional print and broadcast media, we find a good balance,” she said.

Home in Portarlington, her hobby is still to do PR, for the Banríon Gaels camogie club she co-founded six years ago. Her two children play for the club.
“Our hashtag is the hardest working ladies in the parish. I’m happy to use my skills to promote them. Portarlington is a wonderful town to live in,” she said.