Illegal sulky racing causing 'near misses' with traffic in Laois 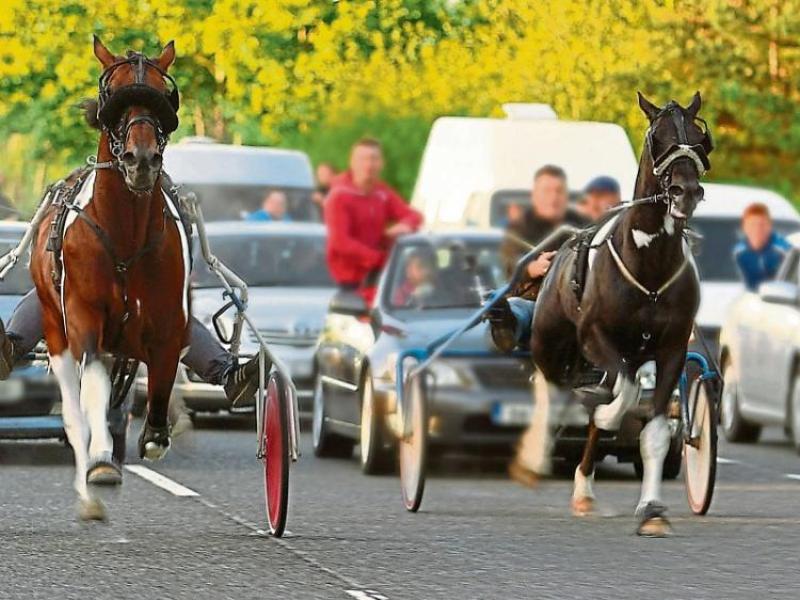 The illegal practice of sulky racing is causing “a lot of concern” for residents near the Laois Carlow border.

A Laois councillor has claimed that “nothing is being done” to stop the racing of the traditional single horse and trap on rural roads near Ballickmoyler, Knockbeg and Sleaty.

Cllr Aisling Moran has called on the Department of Agriculture to “step up to the mark” and seize any horses that have no identity chips.

“They have a track for sulky racing and nothing is being done. If i was on a bike with no helmet, or in a car with no lights, or I had a dog on the road with no licence, he’d be gone. I can’t understand it.

“There is sulky racing, with vans in front of them taking videos. It takes a long time for the Gardaí to get there and the race is over before anyone comes out. This needs to be addressed,” she said.

“There are kids aged five or six on the back of them. I thought horses had to be chipped, I can’t understand if they have no chip. Some of these horses have nowhere to graze, they are out in the cold, with muck up to their oxters. The department of Agriculture needs to step up to the mark, and ensure if they are not chipped to take them,” she said.

Cllr Aidan Mullins told her that it is cheaper to get another horse than reclaim one seized by the local authorities.

“It ends up costing Laois County Council money to hold them and send them off to make dog meat. They (owners) let you seize the horse and they deny ownership,” he claimed.

Cllr Moran spoke on the issue at the March meeting of the Graiguecullen Portarlington Municipal District, with Cllr Padraig Fleming agreeing.

“Sulky racing is illegal but they have to be caught doing it to be taken to court. It is not breaking the law if they are walking along the road.

"There have been a lot of near misses, this is a major concern,” he said.

Cllr Moran made the claims while speaking on her motion asking for resurfacing and widening of the Ballickmoyler road to Ballyharmon cross which is in the same area.

She called also for development fees for rural businesses to be spent maintaining the roads to those businesses.

“When a business applies for planning in a rural area, the fees are higher because roads might need widening. In a lot of cases they pay huge fees and business rates, but roads are not unkept," she said.

She noted that the Ray Whelan refuse company is based in the area.

“On the Ballyharmon road trucks are the full width of the road. Why does it take so long? They have paid extra in planning conditions to widen the roads. Is all our money going to Portlaoise?,” she said.

Council engineer Philip McVeigh replied that they do address road damage when it is raised with them. He said that an inspection has shown that this road does need resurfacing, and money will be sought to do the works this year.

Any road race in Ireland requires a licence from the Gardaí to be legal.