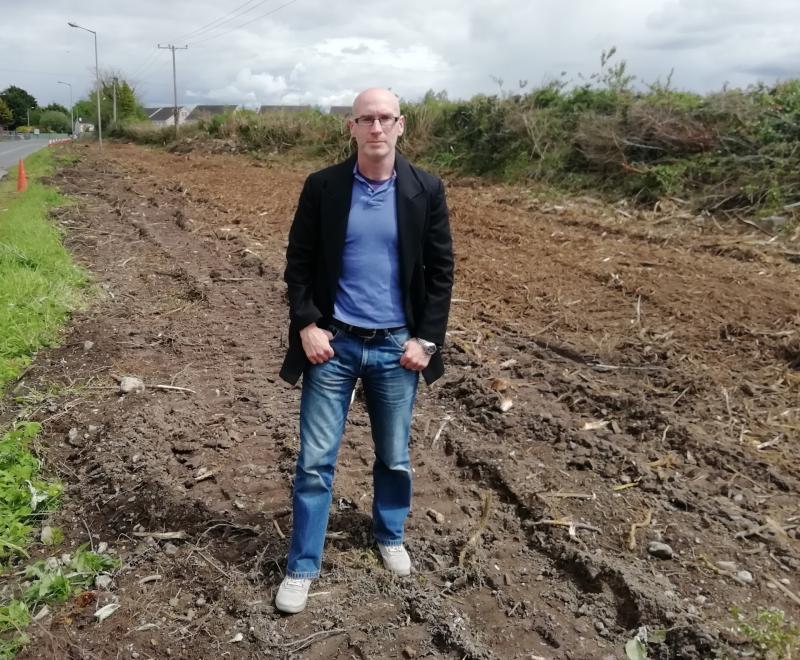 Photo shows John at the site where the hedges were buldozed Canal Road.

A Green Party representative in Laois has lashed out at the removal of hedgerow in Laois to pave the way for a new cycle lane and footpath for children who attend the town's boys national school.

The Green Party’s representative in the Portarlington-Graiguecullen local electoral area, John Holland, has expressed his shock and dismay in a statement following the removal of about 200 metres of hedgerow during  National Biodiversity Week.

Mr Holland said the vegetation was made up of dense, mature, and biodiversity-rich native hedgerows which included trees on Canal Road in Portarlington. He said it was removed to make room for a dual cycle lane and footpath next to Scoil Phadraig.

Describing the move as 'destruction', he said it had also taken place during the prohibited bird nesting season in accordance with the Wildlife Act, hedge cutting is banned between March 1 and August 31.

“This is totally unacceptable," he said.

"While I am strongly supportive of more cycling and walking infrastructure in Portarlington, this is not the way to go about it. We are in the midst of a climate and biodiversity crisis, and the removal of a significant length of hedgerow, at the height of the bird nesting season is wholly inappropriate.

“I have received numerous calls from local residents who are as appalled as I am at the destruction that has taken place. Some of these residents live directly behind the area where the hedgerow was cleared, and are devastated to see its removal. It not only provided pollution, safety, and noise buffer for them, it also added greatly to the biodiversity of the whole area. The installation of cycle lanes is very important and is something I care a lot about…but not at the huge cost to the environment evidenced by this scale of hedgerow removal," he said.

Mr Holland wants answers from the local authority adding that he had already notified the agency responsible for protecting wildlife and their habitats.

“I am also calling on Laois County Council to justify what the urgent need was for this clearance to take place, and that they sought and obtained ecological advice, to check the hedges for nests and small mammals prior to this hedgerow removal. The National Parks and Wildlife Service has been informed.

“We urgently need to wake up to the biodiversity crisis, and we need our local authorities to lead on this. Our natural world has been decimated by our thoughtless and unsustainable methods of development. The irony is that this destruction has taken place on National Biodiversity Week….today is World Biodiversity Day!

"Not in Portarlington it seems,” he said.