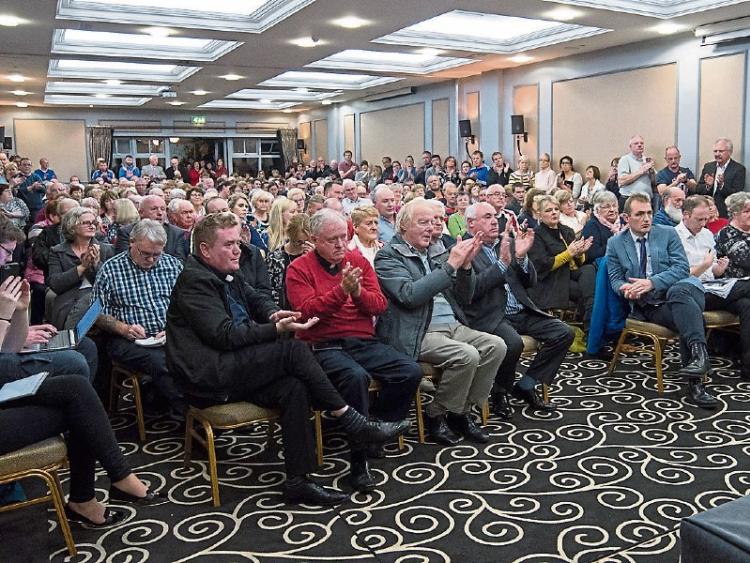 The packed attendance at the public meeting on October 25

The Laois public has urged its politicians to unite over the hospital or face losing power.

The 300 concerned people who packed the Midlands Park hotel room to standing for a meeting to save Portlaoise A&E last Wednesday October 25, left no doubt that they want the Laois Minister Charlie Flanagan, and both TDs Sean Fleming and Brian Stanley, to unite and get the job done right.

One lifelong Fine Gael supporter urged Minister Charlie Flanagan to “put his neck on the line”.

“If Fine Gael turns its back on Laois, maybe Laois should turn its back on Fine Gael,” said young Laois businessman Seamus Delaney.

“Now is the time for the Minister to put his neck on the line and say ‘if this decision is announced, and they close Portlaoise hospital, I’m walking away from my party’,” Mr Delaney said.

“Rightly or wrongly, my whole life I’ve voted Fine Gael. There is no point organising a march after a decision is made, it’s too late. There’s no point me saying I’m not voting for them in the next election because of the hospital. Now is the time for all of us in Laois to say ‘there’ll never be a person in Fine Gael voted fore here again,” he said.

A retired nurse warned that people would die.

“I was a nurse for all of my life, 45 years. If this proposed thing goes through, there will be another redress in five or ten years, for all the people who lost their lives due to the closing down of the local A&E,” said Teresa Lynch.

“It is totally unacceptable that elderly and sick people would have to travel to Tallaght. People in Dublin are not five minutes from a hospital. Our local hospital needs to be kept for very sick people, I call on our politicians, all get togethe and fight this,” Ms Lynch said.

“It is scandalous that Dick Sydes in 1991 was trying to fight this, and we are still here in 2017, it’s wrong. We don’t need to come back here again, bringing out all these good people, these doctors, they’re the experts. Listen to them. Be like the boys in the rugby and get in and sort it,” he said.

Addressing Sean Fleming TD, he said “you said it would not happen on your watch, but that was two years ago”.

“Someone doesn’t like Laois, I don’t know why. We are bottom for the IDA, for Tourism, and for the hospital, what’s the problem?,” Mr Dunne said.

Thomas Timmons from Portlaoise is on the Action Committee, and urged against “playing politics”.

“The days of playing politics with the hospital are over, I ask that you join together as one group and fight for our hospital,” he said, to loud applause from the audience.

“I was in town and met an old lady and she said ‘I’m afraid to get sick, where will I end up?’. Isn’t that a very sad situation? I told her you needn’t worry, I promise you the hospital is going nowhere. I’d ask you to keep that promise I’ve made. Fight for your hospital, forget about your politics,” he urged.

A young Ballyroan father wants an independent Laois politician to emerge and fight.

“They’re all out there trying to get candidates for the next election, if you can get a Minister for floods, surely Portlaoise can have an independent candidate for the hospital. As soon as you get into a party, you are under the whip and Laois will not matter, as it has not mattered,” said Michael Scully.

“I’ve had a quintuple bypass. If that golden hour was gone, I’m gone,” he said.

For more on the threatened services to Portlaoise read here.

A large committee has formed to try to halt the HSE's plan to downgrade Portlaoise, read here.